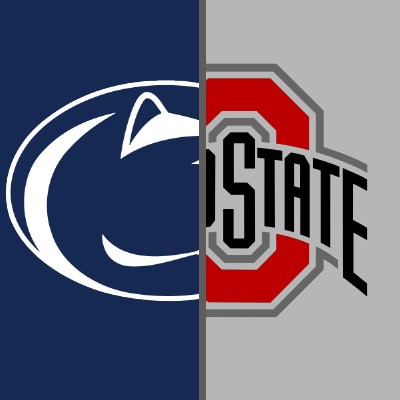 The marquee matchup of the week is No. 8 Penn State visiting No. 2 Ohio State. It stands as the Nittany Lions last chance to push for a spot in the College Football Playoff and the biggest test of the year for the Buckeyes.

Penn State (9-1, 6-1 Big Ten) suffered its lone defeat two weeks ago at the hands of the Minnesota Gophers but bounced back last week with a hard-fought victory over a drastically improved Indiana.

The Nittany Lions are young, but talented on offense. Quarterback Sean Clifford is just a sophomore but is among the conference leaders in passing yards and touchdowns. The running back trio of Journey Brown (sophomore), Noah Cain (freshman) and Devyn Ford (freshman) all average over five yards per carry and have combined to score 14 touchdowns. Penn State’s top three pass catchers this season, receivers K.J. Hamler and Jahan Dotson, along with tight end Pat Freiermuth, are all sophomores.

Defensively, despite allowing more than 57 points in the last two games, Penn State still ranks in the top-10 in scoring defense nationally. The Nittany Lions have been susceptible against the pass when opposing QBs have time to throw the ball, but junior defensive ends Shaka Toney and Yetur Gross-Matos make up one of the best pass-rushing duos in the country. Sophomore Micah Parsons has emerged as one of the best linebackers in the Big Ten and is a tackling machine. The Buckeyes will be the best offense Penn State has faced this year, which means veteran players like senior cornerback John Reid and junior defensive back Tariq Castro-Fields will need to step up in the secondary.

Ohio State (10-0, 7-0 Big Ten) is, simply put, one of the most complete teams in the country. The Buckeyes have a 41.7 point average margin of victory this season.

On offense, the Buckeyes move the ball at will. Sophomore quarterback Justin Fields has carved up defenses to the tune of 2,164 passing yards and 31 touchdown passes to just one interception, although those numbers could be significantly higher considering that Fields has sat for many third and fourth quarters because the game was already out of hand. Senior receivers K.J. Hill and Binjimen Victor, along with sophomore Chris Olave, have combined for 102 catches for 1,475 yards and 21 touchdowns this season. But the most important player to the Ohio State offense this season may be junior running back J.K. Dobbins, who this season became just the second running back in Buckeye history to run for 1,000 yards in three straight years, joining two-time Heisman Trophy winner Archie Griffin.

As good as Ohio State is offensively, their defense may be better. Led by the potential No. 1 overall pick in next April’s NFL Draft, junior defensive end Chase Young, the Buckeyes lead the country in scoring defense, passing defense and are sixth in rushing defense. Young, who has missed the last two games because of a suspension, will return against Penn State with fresh legs. Senior Malik Harrison leads a talented linebacking corps, while junior cornerback Jeffrey Okudah is the best player in an extremely talented secondary.

In the last three seasons, these two teams have played three games decided by a total of five points. The Buckeyes have won every game this season by at least 24 points, but they haven’t played a group as talented as the Nittany Lions. This one could come down to the fourth quarter. 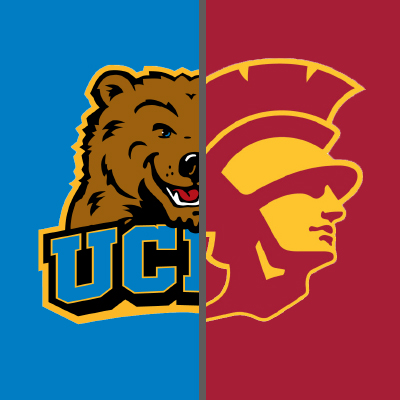 The Bruins and the Trojans will meet in the Battle for LA, with the victor winning the Victory Bell, which is painted in the winning school’s colors for that season.

UCLA (4-6, 4-3 Pac-12) started the season 1-5, but has bounced back late this season and has a chance to be bowl eligible with wins over USC and Cal in the final two weeks.

Before last weekend, the UCLA offense had been impressive during its three-game winning streak. The Bruins averaged 35.7 points and 424.7 yards per game over that stretch, which coincided with an impressive run by senior running back Joshua Kelley. Kelley ran for more than 125 yards in each of the three wins and nearly reached the century mark against Utah last weekend, despite the lopsided score. When the Bruins can run the ball, it creates opportunities for sophomore quarterback Dorian Thompson-Robinson, who has thrown for 2,056 yards and 17 touchdowns this season.

The UCLA defense has had recent success at getting to the quarterback but struggles against the pass when they don’t make the sack. The Bruins are allowing nearly 300 yards per game through the air and have just four interceptions as a team this season. The senior linebacker tandem of Josh Woods and Krys Barnes can wreak havoc on an offensive line and quarterback if they get free pass-rushing lanes. If the Trojans decide to double team Woods and Barnes, junior defensive lineman Osa Odighizuwa will be asked to step up and create pressure from the inside. In the secondary, sophomore defensive back Stephan Blaylock leads the Bruins with 67 tackles this season and two forced fumbles.

USC (7-4, 6-2 Pac-12) will wrap-up their season against UCLA and are trying to go undefeated in the Pac-12 South. With a win by the Trojans and a loss by Utah in the next two weeks, USC would win the South Division and head to Santa Clara for the Pac-12 Championship Game.

In the last few weeks, it has become apparent that the Trojans are fully engaged in offensive coordinator Graham Harrell’s Air Raid offense. Freshman quarterback Kedon Slovis has thrown four touchdowns passes in three of the last four games and is completing more than 70 percent of his passes on the season. Senior receiver Michael Pittman Jr. leads the Pac-12 in receptions, while junior Tyler Vaughns and sophomore Amon-Ra St. Brown are in the top five in catches. The trio has combined for 2,621 yards and 20 touchdowns. The new Trojan offense relies heavily on the pass but has had to lean on it a bit more lately as the top four USC running backs have missed significant time with injuries.

On defense, the Trojans played their most complete game of the season last week against Cal. The defensive line was getting consistent pressure and sacked the Bears quarterbacks a total of five times. USC has been strong against the pass all season but must play better at stopping the run against the Bruins. The Trojans will need big games out of senior linebacker John Houston Jr., the team’s leading tackler, and sophomore linebacker Palaie Gaoteote IV, both of whom will be tasked with stopping the Bruins rushing attack. USC standout sophomore safety Talanoa Hufanga can also be a force in stopping the run.

UCLA surprised many last season when they defeated USC, 34-27, at the Rose Bowl Stadium. Both teams are drastically improved from a year ago, but records mean nothing when it comes to games featuring rivals. Typically, whichever team can control their emotions and make fewer mistakes will win rivalry games. 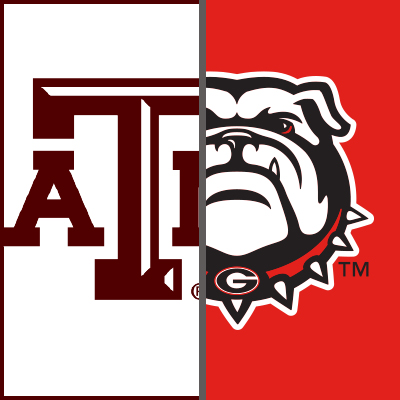 Georgia is currently No. 4 in the College Football Playoff rankings and has already won the SEC East, but the Dawgs have a tough SEC crossover matchup with Texas A&M this week.

The TAMU offense has been steady this season and scored at least 20 points in nine of 10 games. The key to the offense has been the play of junior quarterback Kellen Mond, who has completed 64 percent of his passes for 2,435 yards and 18 touchdowns. Mond also can tuck the ball and run, which has equated to 400 yards on the ground this season and seven more scores. The Aggies returned their top two receivers from a year ago, juniors Jhamon Ausbon and Quartney Davis, who have combined for 95 catches for 1,233 yard and seven touchdowns. On the ground, freshman running back Isaiah Spiller has been the lead back, accumulating 796 yards and eight touchdowns. Fellow freshman tight end Jalen Wydermyer has been a red zone threat, with a team-high six touchdown catches.

On defense, the Aggies rank slightly higher than the offense, primarily by being an elite pass defense. Texas A&M ranks No. 6 nationally in defensive passing efficiency and limit opponents to less than 200 yards passing per game. The Aggies haven’t been particularly good at getting to opposing quarterbacks as their leader in sacks is junior defensive lineman Justin Madubuike with just 3.5 sacks. But eight different Aggies have intercepted a pass this year, including two picks for senior defensive back Roney Elam and junior defensive back Myles Jones.

Georgia (9-1, 6-1 SEC) has been steady all season, but not particularly flashy. The Dawgs have three wins against ranked opponents and will face another in the SEC Championship.

Offensively, Georgia has one of the best “game-managers” in college football. Junior quarterback Jake Fromm is 33-6 in his career as a starter and has led the Dawgs to the SEC Championship Game in each of the last three years. Fromm hasn’t been asked to much this season but has thrown 16 touchdowns to just three interceptions, all of which came in the lone Georgia loss to South Carolina on October 12. The Bulldogs are a run-first offense, led by junior D’Andre Swift, who has 1,027 yards and seven touchdowns this year. Behind Swift are very capable backs, including senior Brian Herrien, who has emerged as a legitimate pass-catching threat, and redshirt freshman Zamir White, who was the top running back coming out of high school two years ago.

The Georgia defense has been the best in the SEC this season. The Dawgs rank first in nearly every major statistical category: scoring defense, rushing defense and total defense. The only thing Georgia doesn’t do is force turnovers as the Bulldogs have just 11 takeaways in 10 games. But Georgia is elite in critical situations: on third down and in the red zone. The Bulldogs lead the SEC and rank in the top-10 nationally in third-down defense, holding opponents under 30 percent on third-down conversions, and in the red zone, where they have allowed opponents to score just 60 percent of the time. Veteran linebackers Monty Rice (junior) and Tae Crowder (senior) lead the Dawgs in tackles, while the elder statesmen on the back end, senior safety J.R. Reed and junior safety Richard LeCounte, make up one of the most dynamic secondaries in America.

This game, like any game, is about limiting turnovers. Both Georgia and Texas A&M have excelled when they don’t turn the ball over. Count on a few momentum-changing turnovers to affect the outcome of this one.