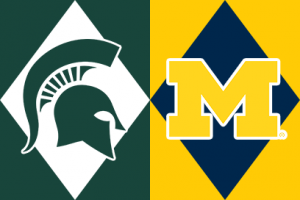 The eyes of the college football world are fixed on the state of Michigan this weekend as the Wolverines and Spartans get set for a top-10 matchup in the battle for the Paul Bunyan Governor of Michigan Trophy.

Michigan State and Michigan are among the final nine undefeated teams in the country and the last two unbeaten teams in the Big Ten. This year’s matchup will mark the 114th time these in-state rivals have met, but just the fifth time that both teams are inside the top-10.

Both teams rely heavily on their ground game, so this could be a true “old-school Big Ten” battle. The Spartans found a gem in the transfer portal this past offseason as junior running back Kenneth Walker III has become their bell cow runner and leads major college football in rushing at 142.4 yards per game. The Wolverines employ more of a thunder-and-lightning approach to their backfield as senior back Hassan Haskins employs a downhill, power running style and sophomore Blake Corum stars as the explosive, change-of-pace option out of the backfield.

On defense, both teams are holding opponents under 19 points per game and pride themselves on shutting down the enemy’s rushing attack. Michigan has been significantly better against the pass so far this season, but despite ranking last in the Big Ten in passing yards allowed, Michigan State ranks first in the conference in sacks per game.

All-in-all, this game comes down to being able to run the football. Whoever can move the chains on the ground and avoid obvious passing situations will win. Both teams can be explosive through the air, but those plays are most effective when the opponent must load the box to stop the run. 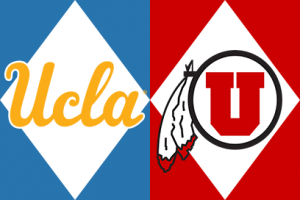 In a wild and wacky Pac-12 South, UCLA and Utah meet with a chance to control their own destiny for a division title.

Both of these teams enter this game coming off of a loss, Utah on the road at Oregon State and UCLA at home in a nail-biter to Oregon. The Utes have won the last four meetings against the Bruins, but UCLA still owns the overall series lead, 11-7.

The identity of the Bruin’s offense this year is more apparent than ever: run the rock. Michigan transfer Zach Charbonnet has five 100-yard rushing games this season and is second in the conference in rushing. The junior was held to just 35 yards against Oregon last week, but fellow running back Brittain Brown picked up the slack and found the end zone twice against the Ducks. With quarterback Dorian Thompson-Robinson’s status for this game in question, the Bruins will likely lean on their rushing attack even more than usual. For Utah, offensive balance is the key. The Utes are in the middle of the Pac-12 in both rushing and passing offense, but those numbers have ticked up since sophomore quarterback Cameron Rising took over. Rising has led Utah to the No. 2 scoring offense in the Pac-12 at nearly 34 points per game.

On defense, UCLA is the best in conference at stopping the run and the worst in the conference in slowing opponents’ passing attacks. But this Jekyll and Hyde defense has found success in forcing opponents into turnovers, leading the Pac-12 with 16 takeaways. Utah, on the other hand, is once again middle of pack in stopping the run and pass. Where the Utes make hay is in the backfield. Utah leads the conference in both tackles for loss and sacks.

Games like this one can come down to “hidden yardage”. These are things that don’t typically make it into the TV stats like penalties and special team yards. Both teams are fantastic in the when it comes to punting and returning punts, but the Bruins lead the conference in kick return yardage. The Utes will look to gain an advantage in penalty yards, where they rank in the top-10 in the country in fewest penalties and penalty yards. UCLA is outside the top-100 in both. 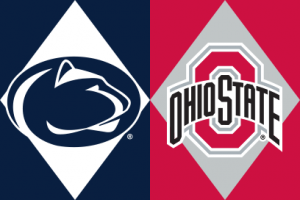 The Buckeyes and Nittany Lions are headed in different directions as they head into their week nine matchup.

Ohio State has won five straight games since their week two loss to Oregon and has scored 50 or more points in each of the last four victories.

On the other hand, things have been on a downward spiral for Penn State. Two weeks ago, the Nittany Lions were beating Iowa 17-3 in the second half but an injury to quarterback Sean Clifford derailed the offense and PSU ultimately lost, 23-20. Penn State followed up the loss with a shocking 20-18 loss in nine overtimes to Illinois.

Offensively, you won’t find a better unit in college football than the Buckeyes. Ohio State has the No. 1 offense in the nation and has racked up more than 500 yards in six straight games. At one point over the last three games, freshman quarterback C.J. Stroud led the OSU offense to a touchdown on 19 consecutive drives until a second half punt against Indiana last week. Comparatively, Penn State’s Clifford is equally, if not more important, to his offense. When he missed time against Iowa, the Nittany Lions managed just 50 total yards on 46 plays. Clifford accounts for nearly 70 percent of the yards per game for the PSU offense.

These two defenses couldn’t be more opposite. The Buckeyes have excelled in stopping the run, but struggle against the pass and in the red zone. The Nittany Lions have had trouble slowing opponents’ rushing attack but are ball hawks through the air and inside their own 20-yard line.

Overall, the Buckeyes are big favorites in this one but the Big Ten has been anything but predictable this year. In four of the last five meetings between Ohio State and Penn State, the game has been within one score late in the fourth quarter. Let’s hope for another epic chapter in this series.