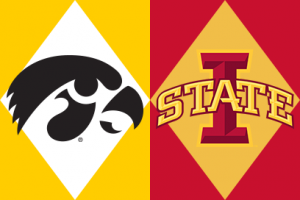 The battle for the Cy-Hawk Trophy always means a lot in the state of Iowa, but it means so much more in 2021 as these two teams will meet in a top-10 clash.

Iowa was able to set the cruise control in a 34-6 over Indiana in week one. The Hawkeyes scored on their opening possession and then scored on a pick-six on the Hoosier’s first possession to jump out to an early 14-0 lead. Iowa’s defense smothered Indiana, holding the Hoosiers to less than 50 percent passing and just 77 yards on the ground. The Hawkeyes intercepted three passes and had another wiped out by a penalty. Junior running back Tyler Goodson paced the Iowa offense with 99 yards on the ground and a score.

The Cyclones were tested in week one but managed to hold off a pesky Northern Iowa team, 16-10. Iowa State’s defense came up big late in the game with two second half interceptions to secure the win. Offensively, the Cyclones were expected to be among the best offenses in the country with senior quarterback Brock Purdy and junior running back Breece Hall returning after stellar 2020 seasons. Iowa State will need more consistent running from Hall, who managed just three yards per carry in the opener.

Rivalry games tend to bring out the best in both teams. In the last decade of matchups, these two have rarely disappointed as six of their last nine games have been decided by six points or less. Iowa has gotten the better of their neighbors lately as the Hawkeyes have won five of the last six. 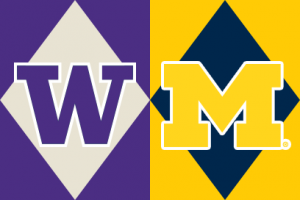 The Huskies and Wolverines meeting on the gridiron has all the feeling of a New Year’s Day game in Pasadena. Washington and Michigan have met four times in The Granddaddy of Them All, with each team coming out on top twice.

Washington stumbled out of the starting blocks for the 2021 season by losing to FCS opponent Montana, 13-7. The Huskies held the Grizzlies to just 232 yards of offense but managed just 291 yards when they had the ball. Washington will need better offensive line play against a bigger, faster opponent like Michigan. In week one, UW averaged 2.4 yards per carry, while quarterback Dylan Moses faced constant under pressure as he was sacked three times and threw three interceptions.

The Wolverines racked up 551 yards of total offense in a 47-14 win over Western Michigan in week one. The offensive outburst was the Maize and Blue’s highest yardage total since 2016. Sophomore running back Blake Corum set career highs in carries (14) and yards (111) in the win, to go with a pair of touchdowns. Junior quarterback Cade McNamara was extremely efficient, completing nine of 11 passes for 136 yards and two scores. Unfortunately, the Wolverines lost senior wide receiver Ronnie Bell for the season to a knee injury.

Michigan is a slight favorite under the lights at The Big House, but expect Washington to be hungry for a win after dropping out of the Top-25 with their loss in week one. 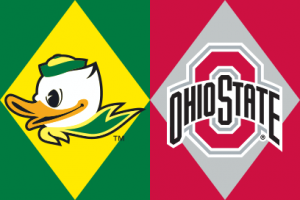 Ohio State owns a perfect 9-0 record all-time against the Ducks, including a win in the 2010 Rose Bowl Game and the 2015 CFP Championship.

Oregon squeaked past Fresno State, 31-24, in week one. The Ducks led 21-6 late in the first half before Fresno battled back to tie the game at 24-24. Senior quarterback Anthony Brown provided the heroics with a 30-yard touchdown run on fourth-and-two to give Oregon the lead and the victory. Despite the win, Brown expressed the need to be cleaner moving forward. The Ducks could be without All-American pass rusher Kayvon Thibodeaux, who left the game against Fresno State with a sprained ankle. Thibodeaux was a force when he played, tallying two tackles, a sack and forced fumble.

Despite the score from their season-opening win, Ohio State’s 45-31 win over Minnesota was less than commanding. The Buckeyes trailed at halftime, 14-10, but literally “ran away” in the second half. Ohio State scored five second half touchdowns of 38, 56, 32, 70, and 61 yards. Freshman quarterback CJ Stroud bounced back from a shaky first half to throw for 294 yards and four touchdowns. The Buckeyes defense is replacing a lot from their 2020 squad that advanced all the way to the CFP Championship Game, but stepped up in big moments during week one.

Ohio State is a heavy favorite in this game. The Buckeyes have only lost once at home in the last five seasons. The Ducks best chance to win is to continue to be disruptive on defense, as they forced four fumbles and tallied four sacks in week one.