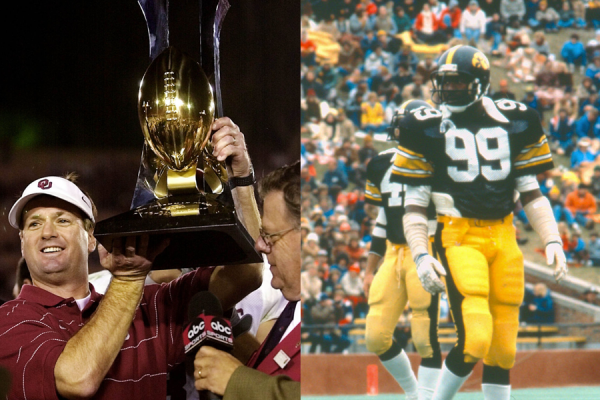 Tippett was a consensus First Team All-American for the Hawkeyes in the 1981 season and lead Iowa to their first Rose Bowl Game in 23 years. He was a two-time First Team All-Big Ten selection and helped Iowa break a streak of 20 consecutive losing seasons. Tippett was enshrined in the National Iowa Varsity Club Hall of Fame in 2007 and the Pro Football Hall of Fame in 2008.

The Hawkeye legend was selected by the New England Patriots in the second round of the 1982 NFL Draft and played his entire professional career with the Patriots (1982-93). Tippett was a five-time Pro Bowl selection and the 1985 NFL Defensive Player of the Year. He is the Patriots all-time leader in sacks (100) and fumbles recovered by a defensive player (19). Tippett was voted into the Patriots Hall of Fame in 1999 and serves as the teams Executive Director of Community Affairs.

Stoops became the Sooners head coach in 1999 and is the only coach in college football history to win a BCS national championship and all four BCS bowl games (Rose, Fiesta, Sugar, Orange). Oklahoma was selected to play Washington State in the 2003 Rose Bowl Game and won, 34-14. Stoops is the winningest coach in Oklahoma history and was a two-time national coach of the year. He led the Sooners to 10 Big 12 Championships and was named Big 12 Coach of the Year six times.

For the entire release of the 2021 College Hall of Fame Class, click here.