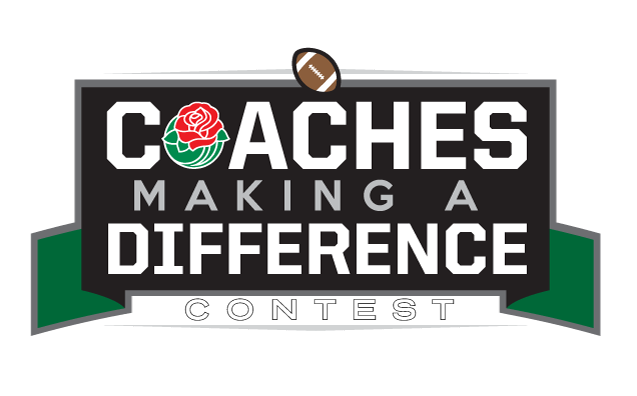 The Rose Bowl Game® presented by Northwestern Mutual, in conjunction with the National Football Foundation, honored coaches with its “Coaches Making A Difference” contest. From October 3 through December 4, individuals nominated high school coaches that have made a difference in the lives of student-athletes in their community. The grand prize winner received a trip to the “Granddaddy of Them All,” the Rose Bowl Game, on January 1, 2018. This year’s game will play host to a College Football Playoff Semifinal and feature the No. 2 Oklahoma Sooners vs. the No. 3 Georgia Bulldogs.

Coaches were nominated for the contest by filling out a nomination form online. A panel of representatives from the Tournament of Roses and the National Football Foundation selected the five finalists and one grand prize winner.

The 2018 Tournament of Roses theme, “Making A Difference,” celebrates the power of kindness and the people in our communities that make a positive difference without reservation.

“Coaches play a significant role in the lives of the youth that they work with,” said Tournament of Roses President Lance Tibbet. “They do not only have the power to touch the heart of a young student-athlete but also engage and inspire the soul of a community.”

The Grand Prize winner was Bill Redell, who has coached at Crespi High School, St. Francis High School, Oaks Christian High School, Occidental College, and in USFL for the Portland Breakers. Coach Redell was inducted into the College Football Hall of Fame in 2001.

The five finalists, who have won a Rose Bowl Game prize pack, include:

About the Pasadena Tournament of Roses®
The Tournament of Roses is a volunteer organization that annually hosts America’s New Year Celebration® with the Rose Parade® presented by Honda, the Rose Bowl Game® presented by Northwestern Mutual and a variety of accompanying events. 935 volunteer members of the association will drive the success of 129th Rose Parade themed “Making A Difference,” on Monday, January 1, 2018, followed by the College Football Playoff Semifinal at the 104th Rose Bowl Game.  For more information, visit tournamentofroses.com. Like us on Facebook and follow us on Twitter, Instagram, and YouTube.

About the National Football Foundation & College Hall of Fame
Founded in 1947 with early leadership from General Douglas MacArthur, legendary Army coach Earl “Red” Blaik and immortal journalist Grantland Rice, The National Football Foundation & College Hall of Fame is a non-profit educational organization that runs programs designed to use the power of amateur football in developing scholarship, citizenship and athletic achievement in young people. With 120 chapters and 12,000 members nationwide, NFF programs include FootballMatters.org, the College Football Hall of Fame in Atlanta, The William V. Campbell Trophy® presented by Fidelity Investments, annual scholarships of more than $1.3 million and a series of initiatives to honor the legends of the past and inspire the leaders of the future. NFF corporate partners include Delta Air Lines, Fidelity Investments, Herff Jones, New York Athletic Club, Pasadena Tournament of Roses, PrimeSport, the Sports Business Journal, Under Armour and VICIS. Learn more at footballfoundation.org.