CFB150 Stories: The Rose Bowl Game and the Military

The Rose Bowl Game has a storied history with the military and games during war time.

In 1918, America was at war, and its boys were overseas fighting to preserve freedom. But with the blessing of President Woodrow Wilson, the increasingly popular Rose Bowl would go on. It wasn’t, however, traditional college teams in the 1918 edition of The Granddaddy of Them All, instead it was with players from the Mare Island Marines of California and the Camp Lewis Army from American Lake, Washington. 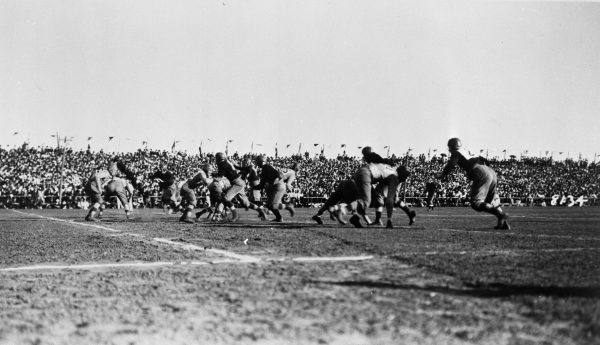 The Marines featured several players from the 1916 Oregon team that went on to win the 1917 Rose Bowl Game. Mare Island was coached by legendary coach Hugo Bezdek and was led by Rose Bowl Hall of Fame inductee Hollis Huntington. Mare Island won the game, 19-7, and the proceeds of the game were donated to the American Red Cross.

With the ink barely dry on the World War I Armistice, the 1919 Rose Bowl Game was again the service championship, this time pitting an undefeated Great Lakes (Illinois) Naval Training Station against a weaker, but still undefeated, Mare Island Marines team.

The Navy was led by future NFL and Rose Bowl Hall of Fame inductee George “Papa Bear” Halas, who set a record for the longest non-scoring play in Rose Bowl Game history on a 77-yard interception return and also scored on a 32-yard touchdown reception. Great Lakes won the game, 17-0.

Like the World War I-era Rose Bowl games of 1918 and 1919, there are times when sports and sporting events—despite the ardent nature with which the country embraces them—simply aren’t that important. The 1942 Rose Bowl Game was one of those times.

Pearl Harbor was attacked on December 7, 1941, which resulted General John L. DeWitt ordering the cancellation of all major events on the West Coast, including the Rose Bowl Game. Within six hours of DeWitt’s order, at the suggestion of legendary Alabama and Duke coach Wallace Wade, The Granddaddy of Them All was moved to Duke Stadium in Durham, N.C., where the East Coast team would host the West Coast team, Oregon State, for the first and only time in the game’s history.

Wade, who was the coach at Duke in 1941, had coached in the Rose Bowl Game in 1926, 1927 and 1931 with Alabama and understood the importance of the game. Duke Stadium needed to add extra bleachers for the game, temporarily expanding the capacity from 35,000 to 56,000. Oregon State won the game behind the strong running of future Rose Bowl Hall of Fame inductee, Don Durdan, who scored a pair of touchdowns in a 20-16 win.