CFB150 Stories: Kicking off the 100th Anniversary of College Football

Throughout the 2019 football season, the sports world will be celebrating the 150th anniversary of college football. The Tournament of Roses and Rose Bowl Game will be joining in on the celebration by bringing you the stories of how the Rose Bowl Game has helped shape college football over the last century and a half. This is the 11th of those stories, “Kicking off the 100th Anniversary of College Football.”

Fifty years ago, on January 1, 1969, the Rose Bowl Game kicked off the centennial celebration of college football.

The first college football game was played between Princeton (then the College of New Jersey) and Rutgers College (now University) on November 6, 1869, in New Brunswick, New Jersey. The game looked completely different than football as we know it today: each team had 25 players on the field at a time and the rules more closely resembled soccer than football. Rutgers won the game, 6-4, in front of the 100 spectators in attendance. 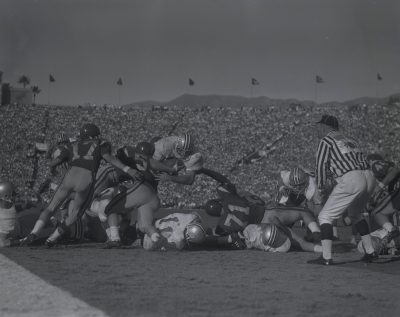 One hundred years later, the 1969 Rose Bowl Game represented the beginning of the 100th anniversary of the sport that had taken America by storm.

For the second time in Rose Bowl Game history and only the third time in bowl history, the 1969 edition of The Granddaddy of Them All was a No. 1 vs. No. 2 matchup. The top-ranked Ohio State Buckeyes entered the game with a 9-0 record, while second-ranked USC finished the 1968 regular season with a 9-0-1 mark. The Trojans had been ranked No. 1 for the majority of the season, but the Buckeyes took over the top spot in the rankings after a commanding 50-14 win over Michigan in the final game of the regular season.

The Rose Bowl Game started slow and was 0-0 after the first quarter. USC jumped out to a 10-0 lead midway through the second, but the Buckeyes rallied with 10 points in the final 1:45 of the first half to tie the game, 10-10, at halftime. 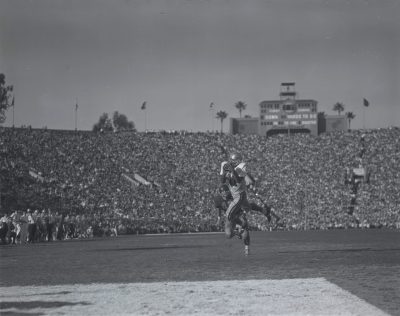 Ohio State came out of the halftime break on fire and scored the first 17 points of the second half to take a commanding 27-10 lead late into the fourth quarter. The Trojans scored a late touchdown but the Buckeyes won, 27-16.

OSU sophomore quarterback Rex Kern was named Player of the Game after tossing a pair of fourth quarter touchdowns. Kern finished the game 9-of-15 passing for 101 yards and two scores and added 35 yards on the ground.

This game is memorable not only because of the 100th anniversary, but also for being the first of four Rose Bowl Game meetings between legendary coaches Woody Hayes (Ohio State) and John McKay (USC). Both coaches led their teams to Pasadena on New Year’s Day eight times and both have been inducted into the Rose Bowl Hall of Fame.

Throughout the subsequent 1969 college football season, many teams wore helmet stickers or jersey patches with “100” to signify the anniversary, but The Granddaddy of Them All kicked off the celebration with a New Year’s Day to remember.