ARLINGTON – The Crimson Tide and its high-powered offense propelled Alabama to a 31-14 victory over Notre Dame in a Rose Bowl Game unlike any other.

The day before bowl selection, it was announced that the College Football Playoff Semifinal at the Rose Bowl Game presented by Capital One would be moved from Pasadena to AT&T Stadium in Arlington, Texas, due to COVID-19 pandemic restrictions that would not allow fans in the stadium and a lack of ICU bed availability in Southern California. 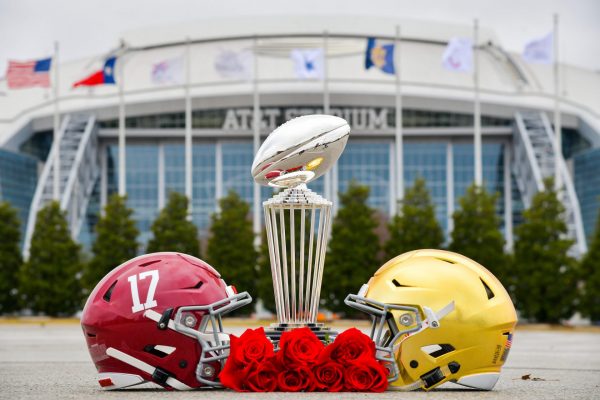 It marked just the second time in the 107-year history of the Rose Bowl Game that The Granddaddy of Them All would be played outside of Pasadena. In 1942, the Rose Bowl Game was moved to Durham, N.C., as all large gatherings on the West Coast were cancelled due to concerns of a second attack following the bombing of Pearl Harbor.

On the Tide’s first drive, Jones was 5-of-6 passing for 68 yards as Alabama effortlessly moved the ball down the field. Jones capped off the possession with a screen pass to Smith, who weaved his way into the end zone from 26 yards out.

After a Notre Dame punt, it was Harris’ turn to take over. Backed up near their own end zone, Harris ran off-tackle left for 15 yards on the first play of the drive. A few plays later, Harris took a handoff, bounced outside to the right where he hurdled over a Notre Dame defender and scampered down the right sideline for 53 yards. Jones would throw a touchdown pass to tight end Jahlil Billingsley on the next play to give the Crimson Tide a 14-0 lead with 4:19 left in the first quarter. 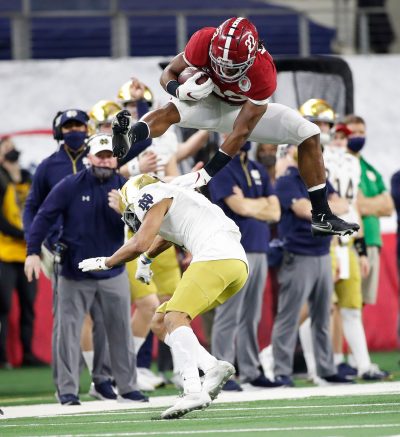 Then, just when it looked like Alabama would run away with the game, the Notre Dame offense woke up. After the Irish’s first two possessions netted just 36 on 11 plays, Notre Dame embarked on a 15-play, 75-yard drive that ate up 8:09 on the clock, culminating in a Kyren Williams one-yard plunge into the end zone to cut the Alabama lead in half, 14-7.

But Jones, Smith and the Crimson Tide could not be stopped. Alabama responded with a six-play, 84-yard drive, which included two long catch-and-run plays by Smith. The second catch, a 36-yard sprint to the end zone past multiple defenders, was Smith’s second touchdown of the game and gave the Crimson Tide a 21-7 lead. 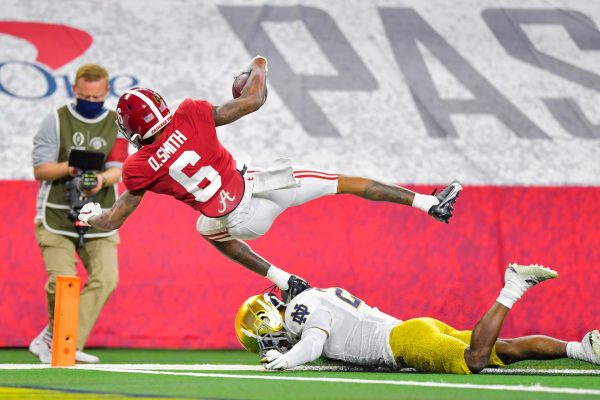 Notre Dame tried to press for a score at the end of the first half as quarterback Ian Book brought the Irish into field goal range with a 20-yard run and a 20-yard pass to wide receiver Ben Skowronek, but the 51-yard kick was deflected at the line and landed short of the uprights.

On the first possession for the Irish in the second half, Book was intercepted by defensive back Christian Harris, which gave Alabama the ball in near midfield. Jones hit receiver John Metchie on a crossing route that went for 40 yards and put the Tide in striking distance. A couple plays later, Jones found Smith at the front pylon for a toe-tapping catch and the duo’s third touchdown connection of the day.

Alabama added a field goal to start the fourth quarter before Notre Dame showed signs of life. The Irish drove all the way down to the Tide’s 13-yard line. A false start put Notre Dame behind the chains and after incomplete passes on third and fourth down, the Irish turned the ball over to Alabama.

Notre Dame forced a punt from the Crimson Tide on the next possession and matriculated their way down the field, 80 yards in 14 plays, eventually scoring on a one yard QB keeper by Book. But it was too little too late for the Irish, as even after they recovered the ensuing onside kick, they had just 54 seconds remaining. Book moved the offense down to the Alabama 15 as time ran out. 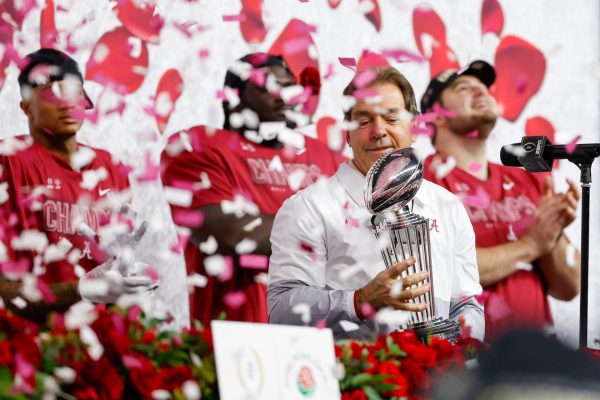