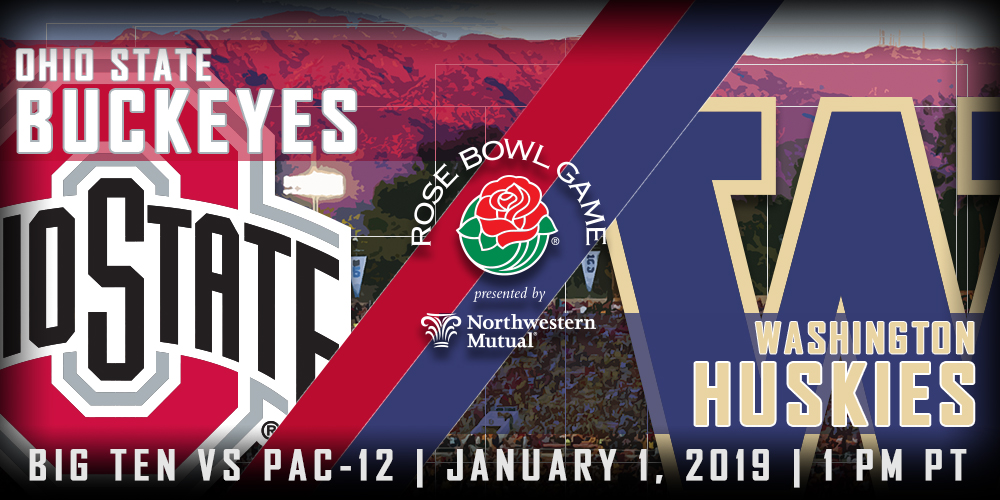 “The Tournament of Roses is thrilled to have the Big Ten and Pac-12 Conference Champions in this year’s Rose Bowl Game,” said Rose Bowl Management Committee chairperson Scott Jenkins. “Both Ohio State and Washington had great seasons and we look forward to hosting both teams and their fans on New Year’s Day.”

This year’s Rose Bowl Game presented by Northwestern Mutual will be the 12th meeting between the Ohio State Buckeyes and the Washington Huskies, but will be the first occurrence in The Granddaddy of Them All.

Ohio State won its second consecutive and 37th overall Big Ten Championship against Northwestern Saturday, 45-24, and finished the season 12-1 overall and 8-1 in conference play. The Buckeyes will make their 15th appearance in the Rose Bowl Game. Ohio State is 7-7 in Pasadena on New Year’s Day, most recently defeating Oregon, 26-17, on January 1, 2010.

Washington won its 18th Pac-12 Championship against Utah, 10-3, on Friday and finished the season 10-3 overall and 7-2 in conference. The Huskies will also make their 15th appearance in the Rose Bowl Game. Washington is 7-6-1 overall in The Granddaddy of Them All. In their last Rose Bowl Game, the Huskies defeated Purdue, 34-24, on January 1, 2001.

Pre-game festivities on January 1, will begin at 1 p.m. PT (4 p.m. ET). The game will be televised nationally on ESPN.

Additional tickets for the Rose Bowl Game will go on sale on Tuesday, December 4, at 9 a.m. PT online via www.ticketmaster.com or by calling Ticketmaster at 1-800-653-8000.

For more information, press only: