Games of the Week: Week 3 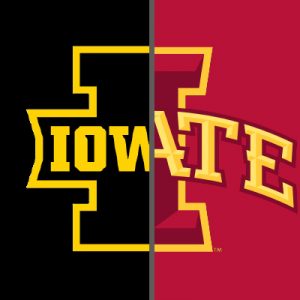 For the first time in Iowa State football history, Ames, Iowa, will be the host of ESPN’s “College GameDay.” The popular Saturday pre-game show has good reason to visit corn country as Iowa and Iowa State are set for a battle for the CyHawk Trophy.

The Hawkeyes and Cyclones have met every year since 1997 and 66 times overall. Iowa has won the last four meetings and leads the series, 44-22.

Kirk Ferentz leads Iowa into this matchup ranked No. 18/19 in the polls and 2-0 after wins over Miami Ohio, 38-14, and Rutgers, 30-0. The Hawkeye offense has looked strong, led by senior quarterback Nate Stanley and a rock-solid offensive line. Stanley has thrown six touchdowns without an interception through two games and has been sacked just twice.

The Iowa defense has been stout as usual, despite having trouble getting to opposing quarterbacks. The Hawkeyes are top-10 in the country in passing defense, total defense and scoring defense, but has just two sacks through two games. Junior defensive end A.J. Epenesa is one of the best pass rushers in the country, so it shouldn’t be long before the Hawkeyes are racking up sack numbers.

Iowa State comes into this matchup 1-0, but it took triple overtime for the Cyclones to defeat FCS in-state opponent Northern Iowa in week one. Iowa State and head coach Matt Campbell had an extra week to clean things up and prepare for the Hawkeyes with a bye last week.

The Cyclones offense is based around sophomore quarterback Brock Purdy this year. Purdy started nine games as a freshman but had running back David Montgomery to lean on. Montgomery is now in the NFL and Iowa State instead is relying on a committee of running backs. Against Northern Iowa, the Cyclones featured four running backs that combined for 42 carries. Senior wide receiver Deshaunte Jones also added a carry but is the primary threat in the passing game after 14 catches for 126 yards in week one.

The Iowa State defense was among the best in the Big 12 last year and returns eight starters. The Cyclones were the top defense against the run in the conference and it appears that has carried over into 2019. Against UNI in week one, Iowa State held the Panthers to 34 yards on 31 carries. The Cyclones were also constantly in the Panther backfield with three sacks and 10 tackles for loss.

In 2017, these two teams combined for a 44-41 overtime thriller. Don’t expect that kind of offensive explosion this year, but it should be a close game. 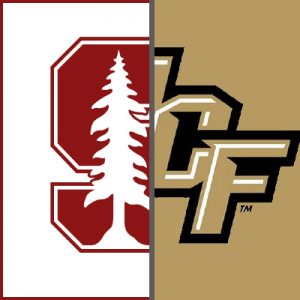 Stanford’s brutal schedule continues with No. 17 Central Florida. For UCF, the Cardinal will represent the first true challenge of the year after two relatively easy wins to start the year.

These two teams have met just once, when Stanford defeated UCF, 31-7, in 2015. Stanford went on to win the 2016 Rose Bowl Game that year, while UCF went 0-12. But these are different times for the Knights, who have won 27 consecutive regular season games and 27-of-28 games overall.

Stanford is coming off a conference loss to USC in week two, but they have some good news: starting quarterback K.J. Costello will return from injury against UCF. Costello, a senior, was injured on the final play of the first half in week one and was unable to play in the loss at USC. Unfortunately, the Cardinal will be without preseason All-America left tackle Walker Little, who was also injured in week one. Senior running back Cameron Scarlett has filled the shoes of now-graduated running back Bryce Love. Scarlett has 179 yards through two games and is averaging 4.6 yards per carry. Junior tight end Colby Parkinson continues to be a focal point in the passing game. His 6’7”, 251 lb. frame is a matchup nightmare for most defenses.

The Stanford defense is as physical as year’s past, but was a bit exposed last week by USC’s team speed. The Cardinal feature one of the best cornerbacks in the country and a sure-fire NFL Draft pick next May in junior Paulson Adebo. Adebo led the country in passes defended in 2018 and was named to the All-Pac first team.

Central Florida has been impressive offensively through two games this season. The Knights have scored a combined 110 points despite starting a different quarterback in each game. Senior transfer Brandon Wimbush started game one against Florida A&M, while true freshman Dillon Gabriel made the start against Florida Atlantic when Wimbush was unavailable to play. UCF has four different running backs who have run for more than 100 yards through two games, which gives head coach Josh Heupel a variety of choices when running the ball.

The Knights defense doesn’t get the love that the offense gets, but UCF is respectable. Central Florida has had to replace five starters, including nearly the entire defensive line. While the Knights weren’t great against the run a year ago, they were solid against the pass and intercepted 14 passes in 2018.

This matchup will be all about how well each teams’ defense can play. Stanford needs to stop the high-powered UCF attack, while the Knights need to prove they can stop the Cardinal run-game. 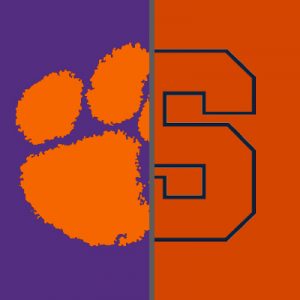 Without knowing the recent history between these two teams, this doesn’t appear to be a great matchup. On paper, Clemson is a runaway top-two team in the country, while Syracuse is an up-and-coming squad but went 4-8 each year from 2015 to 2017.

While Clemson is the reigning National Champion and has made the College Football Playoff each of the last four years, there has been one team that has been a proverbial thorn in the Tiger’s foot: Syracuse. In 2017, Syracuse shocked the college football world when they upset Clemson, 27-24, in the Carrier Dome. Last season, the Orange led the Tigers 23-13 in the fourth quarter before Clemson staged a miraculous comeback, culminated by a touchdown in the game’s final minute to win, 27-23.

So, what does Syracuse do that causes so many problems for Clemson? The Orange feature one of the highest-octane offenses in the country. Few teams move as quickly as Syracuse, but the Orange have had to replace plenty from a team that averaged 40 points and 465 yards per game last year. One of those new starters is sophomore quarterback Tommy DeVito, a top recruit from the 2017 recruiting class. With a young quarterback, the offense has relied more heavily on a ground game with two backs, senior Moe Neal and junior Abdul Adams, splitting carries.

The ‘Cuse defense was one of the best at getting after the quarterback in 2018. The Orange return seniors Alton Robinson and Kendall Coleman, a pair of defensive ends who combined for 20 sacks and 29 tackles for loss last year. But despite the ability to pressure opposing quarterbacks, Syracuse still allowed 264 yards through the air in 2018. That number should improve this year with all four starters returning in the secondary, including sophomore Andre Cisco, who intercepted seven passes in 2018 and has already picked off two passes this year.

But Clemson is exactly what they have been over the last several years, one of the best teams in the nation. Sophomore quarterback Trevor Lawrence has been one of the best quarterbacks in the country since taking over last season. Junior running back Travis Etienne was considered a top-two running back in all of college football and he’s lived up to that billing. Receivers Tee Higgins, a junior, and Justyn Ross, a sophomore, are each 6’4” and catch everything thrown their way.

The Tiger’s defense was among the best in the country the last few seasons, but lost the top five defensive lineman to the NFL and two linebackers must be replaced. But what Clemson does return is a strong secondary and top-tackler Isaiah Simmons at linebacker. And, of course, the Tigers will reload the defensive line with top recruits over that have joined the team over the last two seasons.

It seems improbable, but Clemson is seemingly getting better each season despite winning two of the last three national titles. But somehow, someway, Syracuse has figured out how to push the Tigers to the limit and it could likely happen again in a packed Carrier Dome.