Games of the Week: Week 2 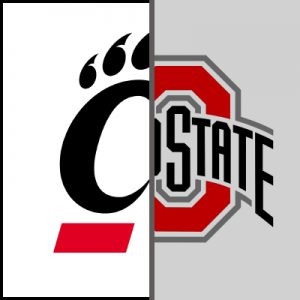 In the battle for Ohio, the Bearcats and Buckeyes will meet for just the 17th time in series history. Ohio State owns the overall series with 14 wins over Cincinnati in 16 games, dating back to 1893.

The Bearcats could be a legitimate threat to the Buckeyes, who have won 41 consecutive games against teams from the state of Ohio. The last time the Scarlet and Gray lost to an in-state team was 1921, when mighty Oberlin College defeated the Buckeyes, 7-6. But this Cincinnati squad should challenge that streak as the Bearcats are coming off an 11-2 season in 2018 and are led by former Buckeye player and coach Luke Fickell.

Cincinnati defeated UCLA in week one, 24-14, last Thursday. That gives the Bearcats two extra days of rest to prepare for their in-state rival. In their opening win, Cincinnati relied heavily on their star backfield of sophomore quarterback Desmond Ridder, 2018 AAC Rookie of the Year, and junior running back Michael Warren, an AAC All-Conference pick last season. Ridder threw for a pair of touchdowns, while Warren ran for a score and caught one of Ridder’s passes for another touchdown. The Bearcat defense returned seven starters from a tough defense a year ago and looked like a veteran bunch against the Bruins as they held UCLA to 218 yards of offense.

Ohio State couldn’t have asked for a better debut from their transfer starting quarterback, Justin Fields. The former top-recruit led the Buckeyes to a 45-21 win over Florida Atlantic. Fields was 18-of-25 for 234 yards, added 91 yards on the ground and tallied five total touchdowns, including four scores in the first eight minutes of the game. The Buckeyes have a talented core of receivers and an excellent rushing attack led by junior J.K. Dobbins. The Ohio State defensive was down a bit last year, but junior Chase Young is one of the best pass rushers in the nation, the linebacking corps return in full force, while safeties Jordan Fuller and Brendon White will anchor the secondary.

It’s a tall task to ask anyone to beat Ohio State in the Horseshoe. The Buckeyes haven’t lost at home in nearly two years and have only dropped three games in Ohio Stadium dating back to the start of 2014. Cincinnati will need to find a way to keep the high-octane Buckeye offense from jumping out to a big lead if they want a chance to win. The Buckeyes, on the other hand, will need to strive for consistency across all four quarters and need to close the Bearcats out if they want to come away with a victory. 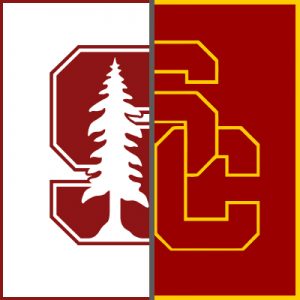 So, what should we expect from Stanford in week two? If K.J. Costello plays, the Cardinal should exhibit a balanced offense. In the 17-7 win over Northwestern, Costello was 16-of-20 passing for 152 yards and a touchdown before leaving the game. The running back tandem of seniors Cameron Scarlett and Dorian Maddox combined for 121 yards on 28 carries. If Costello is unable to play, Stanford will hand the keys to their offense to junior Davis Mills, a one-time top recruit who had thrown two passes in his career prior to playing the second half against Northwestern. Mills completed 7-of-14 passes for 81 yards, but looked confident and comfortable taking over the offense.

It was the Cardinal defense, however, that was especially impressive in their week one win. Stanford held Northwestern to 210 total yards of offense (93 rushing, 117 passing), forced three fumbles – recovered two, and had two interceptions.

For USC, it appears true freshman Kedon Slovis will be called upon to guide the Trojan offense. Slovis was 6-of-8 passing for 57 yards against Fresno State, but threw an interception and lost a fumble. The Stanford defense will certainly be a tougher task for the USC offense, but the Trojans have plenty of playmakers on that side of the ball. The trio of senior Michael Pittman, junior Tyler Vaughns and sophomore Amon-Ra St. Brown might make up the best receiver corps in the country, while junior running backs Vavae Malepeai and Stephen Carr have the skills and experience to ease Slovis into the offense.

On defense, the Trojans will need to find more consistency. At times, USC looked good against Fresno State, but also made several key mistakes which allowed the Bulldogs to rack up more than 460 yards of offense and hang around in the game. The Trojans returned five starters from a year ago, but have plenty of high profile recruits to fill the holes left by graduated players.

This series, once dominated by USC, has turned Stanford’s way over the last decade. The Cardinal have won eight of the last 12 games, dating back to 2009, but half of those games were decided by a touchdown or less. This one has the feeling of a defense battle that will come down to the fourth quarter. 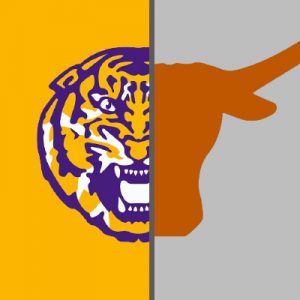 This isn’t just any meeting of Power Five non-conference opponents – Texas and LSU enter the game ranked inside the top-10 of the Coaches Poll and AP Top-25. The Longhorns check-in at No. 9 in both polls, while LSU is sitting at No. 6 in both.

LSU returns nearly its entire offense from a year ago, including senior quarterback Joe Burrow. The Tigers have four returners on the offensive line in front of Burrow and a bevy of running backs ready to carry the ball when called upon. The Tigers also brought back their top six receivers from 2018, giving Burrow plenty of options when throwing the ball.

But the strength of this year’s LSU team, as it has been most years in the recent past, is on defense. LSU lost a pair of consensus All-Americans off their defense from a year ago, but return one of the best safeties in college football, junior Grant Delpit. Sophomore K’Lavon Chaisson could be the next LSU star, but is coming off a torn ACL and will face his first real challenge against the Longhorns.

The Longhorns will once again be led by junior quarterback Sam Ehlinger, who will be making his 22nd start in 25 career games. Ehlinger scored 41 total touchdowns last year (25 passing, 16 rushing) and accounted for 3,774 yards of offense in 2018. Texas has relied heavily on Ehlinger’s ability to run the ball over the last two seasons, but sophomore Keaontay Ingram will be asked to carry the load for UT this fall. Ingram will run behind an experienced offensive line, who will also give Ehlinger time to throw the ball to future NFL-caliber receiver, Collin Johnson.

On defense, Texas must replace eight starters from 2018, but they have a young core that should help bridge the experience gap. The Longhorns have the most returning experience in the secondary with senior safety Brandon Jones alongside a pair of sophomore safeties BJ Foster and Caden Sterns. At linebacker and defensive line, however, the Longhorns will rely mostly on young or unproven players. In the week one win over Louisiana Tech, Texas started two freshman and four sophomores on defense.

This is a classic matchup of strength on strength. The Texas offense will likely face its toughest test of the season in the LSU defense. The Tigers, on the other hand, will hope that experience and growth on offense will lead to more consistency than they had a year ago. This is the marquee matchup of the weekend and should live up to the billing.