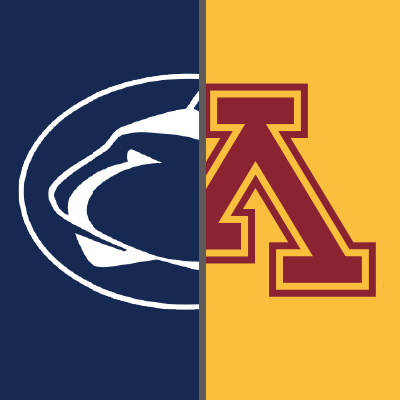 The winner of this battle of undefeated teams receives one of the lesser known trophies in college football, the Governor’s Bell.

Penn State (8-0, 5-0 Big Ten) is ranked No. 4 in the first edition of the CFP Rankings and is 8-0 for the fourth time since joining the Big Ten in 1993. The Nittany Lions have won 12 straight games against Big Ten West opponents, including a win over Minnesota in 2016.

The Penn State offense has a new look this year with sophomore Sean Clifford under center. Clifford ranks second in the Big Ten in passing yards per game (241.4) and is only the second Nittany Lion quarterback to throw for 20 touchdowns in the first eight games of the season. But Clifford isn’t just a pure passer, he can run the ball as well. The Penn State quarterback is third on the team with 280 yards rushing this season. When Clifford does throw it, he has a pair of standout sophomore options in receiver K.J. Hamler and tight end Pat Freiermuth. Hamler is one of the most dynamic playmakers in the country and is tied for the Big Ten-lead with eight touchdown catches this season. Freiermuth is a big target at 6’5”, 260 lbs., and is a big-time red zone threat, leading all tight ends in the country with seven touchdown receptions.

As good as the offense has been, the real stars for the Nittany Lions this year have been on defense. Penn State had three defensive players named to Midseason All-American teams and for good reason. The Nittany Lions rank second in the country in points allowed, surrendering just nine points per game, and ninth overall in total defense. Penn State’s key to defensive success has been stopping the run and getting after opposing quarterbacks. The Nittany Lions are allowing just 68.4 yards rushing per game to rank second in FBS and lead the Big Ten. When opponents are in passing situations, junior defensive ends Shaka Toney and Yetur Gross-Matos have wreaked havoc, tallying 5.5 sacks each this season.

The Gophers have had an efficient and effective offense this year, scoring at least 28 points in every game this season. Sophomore quarterback Tanner Morgan has been one of the Big Ten’s best this year and leads the conference with an average of 15.6 yards per completion. That number is helped in large part by the terrific trio of receivers available to Morgan: senior Tyler Johnson, sophomore Chris Autman-Bell and sophomore Rashod Bateman. Those three have combined for 80 catches, 1,426 yards and 15 touchdowns this season. As good as those receivers have played, Minnesota is a run-first offense. The Gophers rank third in the Big Ten at 204 yards per game on the ground, highlighted by senior running back Rodney Smith. Smith surpassed 3,000 career rushing yards earlier this season and holds the Minnesota record for career all-purpose yards with 5,117.

Defensively, the Gophers have held their opponents under 300 total yards in six straight games. Minnesota is ranked ninth in the country and first in the Big Ten with 11 interceptions this season. They have returned three of those for a touchdown, which ranks second in the nation. Sophomore safety Antoine Winfield Jr. is the biggest playmaker on the defense as he leads the team with 46 tackles and five interceptions, including a pick-six, while also tallying a forced fumble and two sacks this season. His five interceptions already rank as the third most in a single season in team history, are the second most in the NCAA and most in the Big Ten this year.

This Big Ten battle will come down to whichever team can control the line of scrimmage. The Gophers love to run the ball and control the pace of the game, while the Nittany Lions have thrived on stopping the run and getting into opponents’ backfields. The team that wins in the trenches will likely win this game.

In a “Friday Night Lights” game in the Pac-12, this is a meeting of two of the biggest surprises out west this season.

The Huskies have utilized a run-first offense under head coach Chris Petersen, but this season is more balanced than recent years. That is due, in large part, to junior transfer quarterback Jacob Eason, who ranks among the Pac-12’s best in many passing categories. Eason has thrown 20 touchdowns compared to just five interceptions and completed more than 65 percent of his passes this season. Washington hasn’t abandoned the run, they just don’t have a true go-to back this year after four-year starter Myles Gaskin graduated after last season. Junior tailback Salvon Ahmed has stepped up this season to take the majority of the carries and has averaged more than 5.5 yards per rush. Sophomore running backs Sean McGrew and Richard Newton have also added to the rushing attack with a combined 670 yards and seven scores.

Huskies have led the Pac-12 in scoring defense and total defense in each of the last four seasons, but UW ranks fifth in both categories this year. That’s due to the fact that Washington had just two starters return from a stellar defense a year ago. Where the Huskies have been their usual selves is in forcing opponents into turnovers. Washington ranks second in the Pac-12 with 15 takeaways. Senior defensive back Myles Bryant leads the defense with 55 tackles this season and is among the team leaders in tackles for loss with 4.5.

The Beavers offense has been one of the most balanced in the country to this point in the season, with 282 rushing attempts and 276 passing attempts. Oregon State is able to be so balanced because of the efficiency of senior quarterback Jake Luton, who has thrown 20 touchdowns and just one interception this season. Luton’s top target is junior Isaiah Hodgins, who leads the Pac-12 in receiving yards (895) and touchdowns (12). The Beavers also have one of the Pac-12’s best 1-2 punches at running back with senior Artavis Pierce and sophomore Jermar Jefferson. The duo has racked up nearly 1,100 yards this season and has combined for 10 rushing touchdowns.

Oregon State’s defense ranks 104th in scoring and total defense, 100th in passing yards allowed and 93rd in rushing defense, but the Beavers have been a menace in opponents’ backfields and lead the Pac-12 in sacks and tackles for loss. The biggest reason for that is junior outside linebacker Hamilcar Rashed Jr., who leads the nation with 17.5 tackles for loss and is tied for second with 12 sacks. The 12 sacks also ties a school record for sacks in a season. Rashed Jr. has stormed onto the scene lately with a career-high three sacks in each of the last two games. Sophomore linebacker Avery Roberts leads the Beavers in tackles, while junior defensive back Isaiah Dunn leads the secondary with six passes broken up.

On paper, this doesn’t look like a great matchup, but the Beavers are on an upswing while the Huskies are in search of a rebound win. Plus, games on short weeks can result in some strange outcomes. 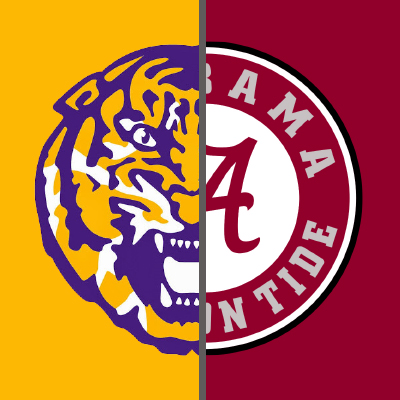 This is one of the most anticipated games on the college football schedule each year, but this year it has some extra significance as both teams are ranked in the initial CFP top-four.

The Tigers offense has been nothing less than a revelation this season after head coach Ed Orgeron hired assistant coach Joe Brady as the passing game coordinator. LSU leads the SEC in total offense (535.9), passing offense (377.6) and redzone offense (43-of-44) and the Tigers are No. 2 in the league in scoring offense (46.8). Senior quarterback Joe Burrow is at the top of many pundits Heisman Trophy list as he leads the SEC and ranks No. 2 in the nation in passing yards (2,805) and passing TDs (30). He’s also first in the SEC and No. 3 in the nation in total offense (366.3). He’s on pace to break every LSU single-season passing record. Burrow can credit many of those numbers to a couple of the best pass catchers in the country, junior Justin Jefferson and sophomore Ja’Marr Chase. That duo is first and second in the SEC In receiving yards and have combined for 98 receptions, 1,568 yards and 18 touchdowns.

LSU’s defense is one of two teams in the SEC to hold opponents to under 100 yards rushing a game. The Tigers are allowing only 97.9 yards rushing a contest and are No. 4 in the SEC in total defense (315.4). LSU has playmakers at every level of the defense. Sophomore outside linebacker K’Lavon Chaisson is one of the best pass rushers in the country, junior middle linebacker Jacob Phillips leads the team in tackles (64) and the Tigers secondary is full of future NFL stars. Junior safeties Grant Delpit and JaCoby Stevens are two of the best in the country, while true-freshman cornerback Derek Stingley Jr. is a bonafide star in the making, leading the team with four interceptions and nine passes broken up.

Alabama (8-0, 5-0 SEC) has once again proven themselves as one of the best teams in the country. The Crimson Tide have yet to be truly challenged this season but were ranked No. 3 in the first CFP Rankings.

The biggest question for Alabama’s offense heading into this matchup is the health of junior quarterback Tua Tagovailoa, who injured his ankle in the win over Tennessee on October 19. Redshirt sophomore quarterback Mac Jones has filled in admirably for Tagovailoa in the last two games, but its tough to replace one of the best passers in Alabama history. Regardless of which quarterback plays, the Tide have plenty of playmakers to catch the ball. Alabama has four receivers with 1,000-plus yards receiving for their careers. Against South Carolina in September, both junior DeVonta Smith and sophomore Jaylen Waddle eclipsed the 1,000-yard mark. The duo joined juniors Jerry Jeudy and Henry Ruggs III, who had each amassed over 1,000 yard receiving previously.

Despite the fact that Alabama seems to send the majority of their defense to the NFL each year, the Tide just keep reloading on that side of the ball. Alabama ranks in the top-three in the SEC in total defense, scoring defense and passing defense. Junior linebacker Terrell Lewis leads the team in sacks (6.0), tackles for loss (9.0) and quarterback hurries (12), while senior linebacker Anfernee Jennings ranks second in all of those categories, plus has added an interception and four passes broken up. Senior defensive end Raekwon Davis is an immovable object at 6’7”, 312 lbs., and demands double teams, which frees up Lewis and Jennings. Senior cornerback Trevon Diggs has been a turnover machine and leads Alabama with three interceptions and two fumble recoveries.

The Tide have won the last eight meetings over the Tigers and Alabama is extremely tough to beat in Tuscaloosa. The Crimson Tide have won 31 straight games at home and have just one home loss since 2012. Alabama head coach Nick Saban has 24 career wins over top-five opponents, which is the most all-time. But none of that matters when it comes to rivalry games. This is sure to be one of the best games of the year. It could be an offensive explosion or it could be a grind-it-out defensive battle. Either way, it’ll be fun to watch.