Ohio State’s senior linebacker Jordan Fuller and Washington’s junior linebacker Ben Burr-Kirven were presented the first Tournament of Roses Scholar-Athlete Award at the annual Lawry’s Beef Bowl. For the first time in the history of the Tournament of Roses, a standout student-athlete from each participating Rose Bowl Game team was honored for their academic and athletic accomplishments. This year’s Tournament of Roses President Gerald Freeny presented the award to each recipient at the 63rdannual Lawry’s Beef Bowl at Lawry’s Prime Rib in Beverly Hills, Calif.

“This year’s award winners from Ohio State and Washington exemplify what it means to excel both on the field and in the classroom,” said Freeny. “It’s an honor to present the first Tournament of Roses Scholar-Athlete Award to these two exceptional student-athletes and we look forward to seeing both teams compete on the field on New Year’s Day.” 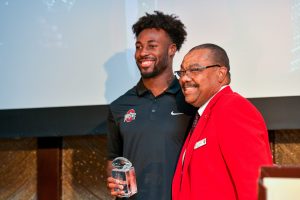 Fuller, a Norwood, NJ. native, is a second-year starting safety for the Big Ten Champion Ohio State Buckeyes. The team captain has maintained a 3.81 grade-point average as a business major and was recently named a first-team Academic All-American by the College Sports Information Directors of America (CoSIDA), marking the second-consecutive season he was honored as an Academic All-American. Fuller is also a two-time OSU Scholar-Athlete recipient and was named a Big Ten Conference Distinguished Scholar and to the Academic All-Big Ten Conference team in 2017. The senior has just as an impressive resume on the field, leading the Buckeyes’ secondary this season with 72 tackles (second-most on the team), an interception and two fumble recoveries. He was named an All-Big Ten third-team honoree in 2017 and was an honorable mention this season.

Burr-Kirven, originally from Menlo Park, Calif., is one of the Pac-12 Champion Washington Huskies most accomplished student-athletes on and off the field. The senior linebacker was recently named the Pac-12 Scholar-Athlete of the Year and the Pac-12 Pat 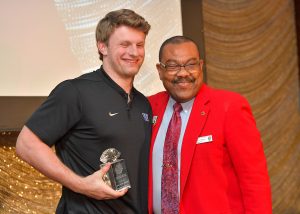 Tillman Defensive Player of the Year. The comparative literature (cinema studies) major boasts a 3.69 grade-point average and is a
two-time first-team Academic All-Pac-12 selection, as well as a two-time CoSIDA Academic All-America District 8 honoree. The Associated Press, Football Writers Association of America and ESPN all named Burr-Kirven a first-team All-American this year as he anchored the Husky defense with 165 total tackles, two interceptions, six pass breakups and three fumble recoveries.

Ohio State and Washington play in the 105th Rose Bowl Game presented by Northwestern Mutual at 1 p.m. PT/4 p.m. ET, on January 1, 2019, at the Rose Bowl Stadium. The game will be televised nationally on ESPN.