George Halas, Randall McDaniel, Pop Warner and Vince Young to be Inducted into the Rose Bowl Hall of Fame Class of 2018 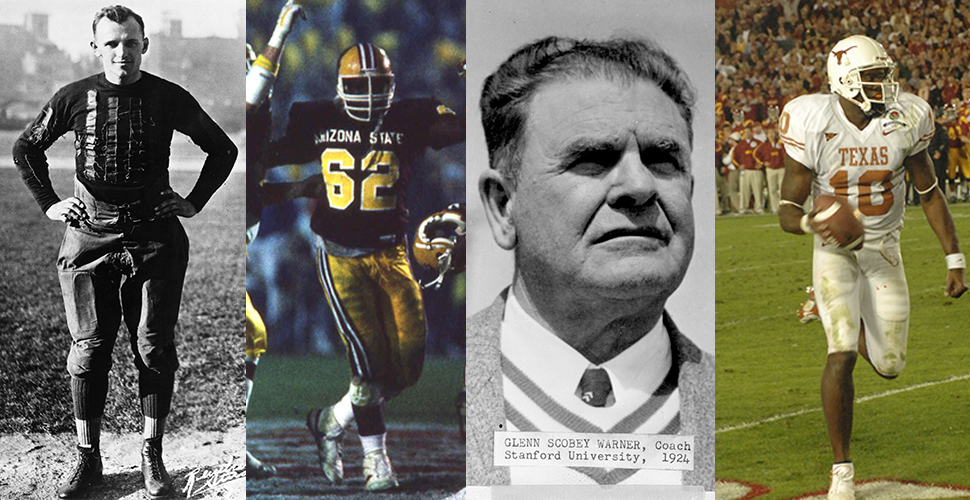 George Halas was a three-sport athlete at the University of Illinois, but played in the 1919 Rose Bowl Game as a member of the Great Lakes Navy. Halas led the Navy to a 17-0 win over the Mare Island Marines and was named MVP of the game. He scored on a 32 yard touchdown reception and added an interception, which he returned for 77 yards – a record that still stands today as the longest non-scoring interception return. Following his time in the Navy, Halas founded the Chicago Staleys, who became the Chicago Bears in 1921. Halas was the player-coach of the Bears for 10 years and spent four stints as the team’s head coach, spanning nearly 50 years. The Bears won 324 games and six NFL titles under his tutelage, both of which stood as NFL records until broken in 1993.

Randall McDaniel has been considered by many to be the best pulling guard in NFL history and was inducted into the Pro Football Hall of Fame in 2009. Prior to his professional career, McDaniel led the Arizona State Sun Devils to a 1986 Pac-10 title. The 1987 Morris Trophy winner, given to the Pac-10 Offensive Lineman of the Year, was one of the best players on the Sun Devil team that went on to defeat the Michigan Wolverines in the Rose Bowl Game, 22-15. The two-time All-American was inducted into the ASU Hall of Fame in 1999, the College Football Hall of Fame in 2008, the State of Arizona Hall of Fame in 2011 and was named to the Pac-12 All-Century Team in 2015. Since retiring from professional football, McDaniel has been an elementary school teacher in Minnesota and has started, worked with, and funded numerous charitable and philanthropic efforts in Minnesota and Arizona.

Glenn Scobey “Pop” Warner is regarded as one of the most innovative and creative coaches in college football history. A coaching career that spanned nearly 45 years, Warner won a then-record 319 games and four national championships, the first three at the University of Pittsburgh and the final one at Stanford in 1926. The legendary coach made three appearances in the Rose Bowl Game and compiled a 1-1-1 record. The first time he brought a team to the Granddaddy of Them All, Warner’s Stanford team was defeated by Knute Rockne and the Four Horseman of Notre Dame, 27-10, on January 1, 1925. Two years later, Warner and Stanford returned to Pasadena for the 1927 Rose Bowl Game and tied Alabama, 7-7, with both schools named National Champions. Warner earned his first victory in a Rose Bowl Game in his third try, the following year in 1928, by defeating his former team, the Pitt Panthers, 7-6.

Vince Young is one of only four players to win Rose Bowl Player of the Game honors twice after leading the Texas Longhorns to back-to-back Rose Bowl Game victories in 2005 and 2006. Against Michigan in 2005, Young threw for 186 yards and a touchdown, while also adding 192 yards and four touchdowns on the ground in a 38-37 victory over the Wolverines.   The following year, in what is widely regarded as one of the greatest bowl games ever played, Young led the Longhorns to a 41-38 come-from-behind win over the USC Trojans in the BCS National Championship. In the victory, Young managed to outdo his numbers from the previous year as he completed 30-of-40 passes for 267 yards, rushed for 200 yards on 19 carries and scored three total touchdowns while rallying the Longhorns to victory, overcoming a 12-point deficit with less than seven minutes left in the game. Young set Rose Bowl Game records in the game for total yards (467), rushing yards by a quarterback (200), touchdowns (5) and points responsible for (30).

The Pasadena Tournament of Roses is a volunteer organization that annually hosts the Rose Parade, the Rose Bowl Game and a variety of associated events. The Tournament’s 935 volunteer members act as ambassadors of the organization within the community and serve on one of 31 committees that ensure the success of the parade and game. Collectively, they contribute upwards of 80,000 hours of manpower each year. For additional information on the Tournament of Roses please visit the official website at www.tournamentofroses.com.