Throughout the 2019 football season, the sports world will be celebrating the 150th anniversary of college football. The Tournament of Roses and Rose Bowl Game will be joining in on the celebration by bringing you the stories of how the Rose Bowl Game has helped shape college football over the last century and a half. This is the fifth of those stories, “Stanford Introduces College Football to the T-Formation.” 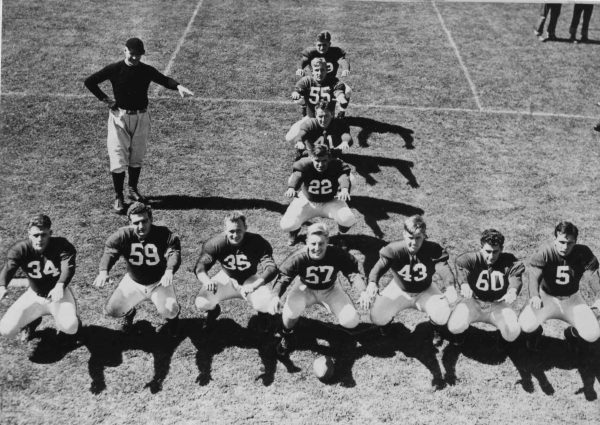 While the 1926 Rose Bowl Game has been called, “The Game That Changed the South,” the 1940 Stanford team that played in the 1941 edition of the Granddaddy of Them All has been described as, “The Team That Changed the Game.”

After a 1-7-1 season in 1939, Stanford hired a new football coach for the 1940 season, Clark Shaughnessy. Shaughnessy was a veteran coach but had only experienced marginal success in his nearly three-decade coaching career. Prior to being hired at Stanford, Shaughnessy coached at the University of Chicago, where he spent time with the Chicago Bears and Bears coach and owner George “Papa Bear” Halas. The duo experimented with an old-style of football, the T-formation.

Shaughnessy inherited a talented Stanford roster when he took over the team, including quarterback and future Rose Bowl Hall of Fame inductee Frankie Albert. He believed the team could find success with a little tweaking, including a switch from the single-wing offense to the T-formation.

The basis of the T-formation was that three backs would lineup directly behind the quarterback, forming a large T with the offensive line. The formation emphasized motion, deception and speed rather than the early 1900’s version of the “T”, which relied on power and brute force. These changes reduced the disadvantage of having an undersized line and would confuse defensive players who could not see which offensive player had the ball.

Stanford went undefeated in the 1940 regular season utilizing the T-formation and earned an invitation to the 1941 Rose Bowl Game.

The Granddaddy of Them All was the first opportunity for many people to hear about Stanford’s new rendition of what Shaughnessy called “football’s oldest formation.” Stanford would beat Nebraska, who was playing in its first ever bowl game, 21-13 on January 1, 1941.

The 1940 Stanford squad was later memorialized in a book titled The Wow Boys: A Coach, a Team, and a Turning Point in College Football. The T-formation has been credited with changing football from a game based on brutality to a game based on quickness, which is still evident in today’s wide-open offenses. In 2002, ESPN ranked the development of the T-formation as the No. 2 best sports innovation of all time.