A $10k scholarship and an exclusive Rose Bowl Game work experience will be awarded to each recipient from Big Ten and Pac-12 Conference universities. 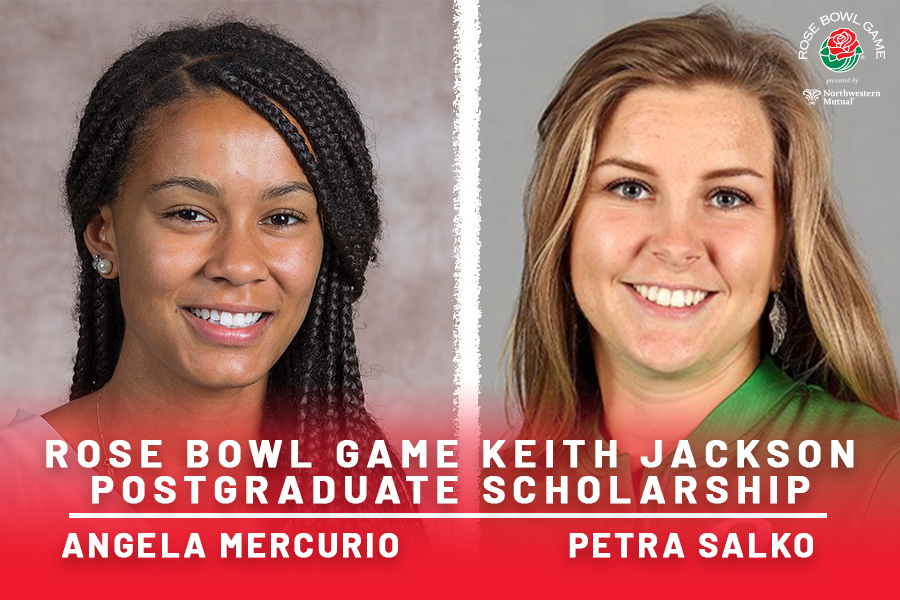 PASADENA, Calif. (October 1, 2019) –The Tournament of Roses® announced today the recipients of the first-ever Rose Bowl Game Keith Jackson Postgraduate Scholarship. Angela Mercurio (University of Nebraska) and Petra Salko (University of Oregon) will each be awarded $10,000 toward their post-graduate education in addition to receiving a unique and specialized work-study experience at the 2020 Rose Bowl Game presented by Northwestern Mutual.

The new scholarship recognizes Mercurio and Salko, recent graduates from the Big Ten Conference and Pac-12 Conference, for exceptional achievement in both academics and civic service. The application process was open to senior-level undergraduate students who submitted a personal essay along with the other application materials by April 30, 2019.

Mercurio is a graduate of the University of Nebraska, with a bachelor’s degree in biochemistry and women’s and gender studies. She excelled in the classroom, earning a 3.98 cumulative GPA, and on the track as a Big Ten Champion, a three-time All-American, and a five-time Canadian national champion in the triple jump. Mercurio has spent countless hours giving back to her community, volunteering extensively at the People’s City Mission Shelter, Nebraska-area schools and numerous hospitals. She was the co-founder of Sisters United and served as a three-year member of the Athlete-to-Athlete Peer Mentoring Group at Nebraska. She plans to pursue a career in sports medicine as a way to have a positive impact on athletes at the collegiate, national, and professional level.

Salko is a graduate of the University of Oregon. She earned a bachelor’s degree in business administration with a concentration in finance while maintaining a cumulative 4.04 GPA. As a four-year letter winner in women’s golf, Salko served as a captain in both her junior and senior year at Oregon and as part of Finland’s National Golf Team. Salko worked as a senior analyst as part of the University of Oregon Investment Group throughout her senior year, helping to manage a $1.5 million investment fund. The Pac-12 Scholar Athlete of the Year also served three years on the Student-Athlete Advisory Committee and was a volunteer for both the Special Olympics and First Tee. She plans to pursue a postgraduate degree with career aspirations to work in finance for a major sports corporation.

“Angela and Petra are exceptional individuals that embody what the Rose Bowl Game Keith Jackson Scholarship aims to recognize – excellence in the classroom and the community,” said Laura Farber, President of the Tournament of Roses. “We’re thrilled to welcome two student athletes to Pasadena to see first-hand what goes into putting on the Rose Bowl Game and it’s ancillary events. Students like Angela and Petra will be the leaders of tomorrow and the Tournament of Roses, along with our conference partners at the Big Ten and Pac-12, are thrilled to be able to help them as they work toward a career in the sports industry.”

The Keith Jackson Postgraduate Scholarship is funded by the Rose Bowl Game, which is a tri-party agreement between the Pasadena Tournament of Roses, the Big Ten Conference and the Pac-12 Conference. For more information, including details on eligibility and how to apply, please visit www.tournamentofroses.com/events/scholarship.