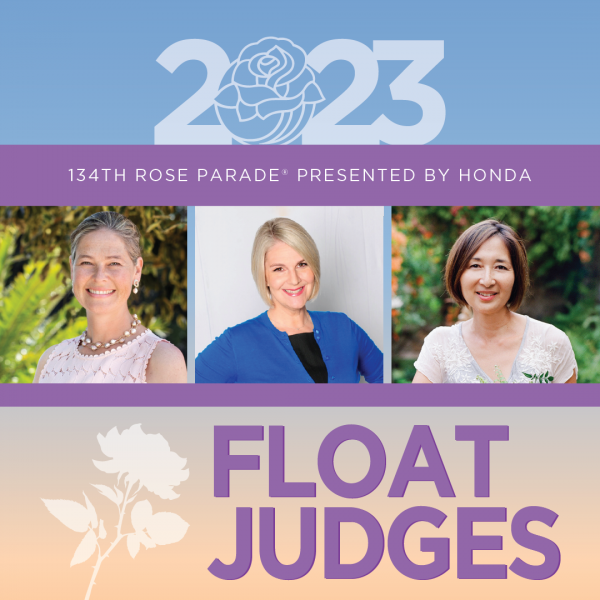 PASADENA, Calif. (September 29, 2022) – The Pasadena Tournament of Roses® has selected Nicole Cavender, Jennie O’Hagan and Lois Hiranaga as judges for the 2023 Float Awards sponsored by FTD.

This year’s judges bring unique perspectives on parades and floral presentations. Nicole is the Telleen/Jorgensen Director of the Botanical Gardens at Huntington Library, Art Museum and Botanical Gardens in San Marino. Jennie was a four-time Executive Producer of the Rose Parade on broadcast partner KTLA and is currently Director of Programming at Boston Globe Media. Lois is the owner of Lois Hiranaga Floral Design, specializing in destination wedding florals, lobby & resort flowers, convention florals and private residence interiorscape.

Each year, three judges grant 24 float awards based on three categories: Float Design, Floral Presentation and Entertainment Value. The judges are looking for creative design and outstanding presentation of the theme matched with floral artistry and artistic excellence. The top award is the coveted Sweepstakes trophy, which is awarded for the most beautiful entry, encompassing float design, floral presentation and entertainment.

As the award-winning floats venture down the parade route, they are preceded by banners showcasing their award. The banners are carried by members of the Tournament of Roses Eagle Scout and Gold Award Girl Scout Troops.

On the morning of January 2, the award-winning floats will be announced on the front steps of Tournament House by the 2023 Tournament of Roses President Amy Wainscott.  The 134th Rose Parade presented by Honda will begin at 8:00 AM/PST and will be broadcast in the United States and around the world to kick off America’s New Year Celebration®.

For complete biographies of the 2023 Float Judges, please visit here.