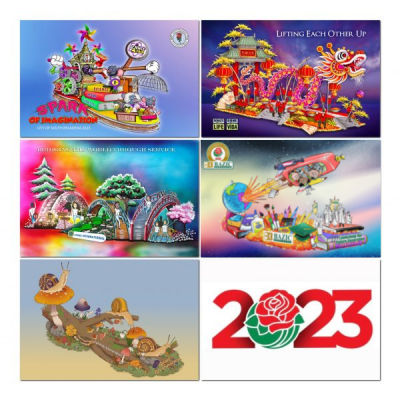 PASADENA, Calif. (October 20, 2022) – As the Pasadena Tournament of Roses prepares for the 134th Rose Parade presented by Honda, we are excited to offer the first in a series of sneak previews of floral float entries that will inspire and charm our worldwide audience from Colorado Blvd. on January 2, 2023.

Since the first Rose Parade in 1890, each float entry presents a unique theme and visual story that bring their vessel to life. The theme of the 134th Rose Parade — “Turning the Corner”—is reflected in the official renderings for float participants BAZIC Products, Cal Poly Universities, City of South Pasadena, Donate Life and Lions Club International.

The floats will journey the 5 ½ mile Parade route displaying their symbolic and spectacular storytelling sure to be embraced by millions of streetside and broadcast viewers from across the country and around the world drawn to America’s New Year Celebration. 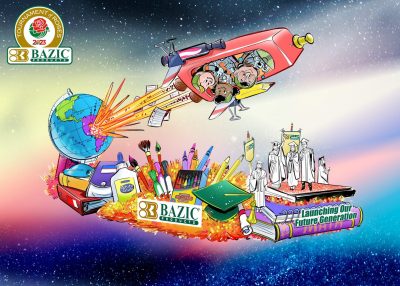 Celebrating 25 years in business, the BAZIC Products float inspires people across the country and around the world the importance of education in our future generation. Known for its wide variety of supplies ranging from office and school to writing tools, BAZIC Products takes pride in offering national quality school supplies that are affordable, making educational supplies more accessible for everyone. The theme of the float is Launching Our Future Generation and features three kids in a rocket representing the vision and creativity of our youth to rise above any circumstance. On and surrounding the float are a diverse group of celebratory graduates of varying ages and education levels. The float uses lentils, rice, split peas, seaweed and poppies, and more than 10,000 roses. 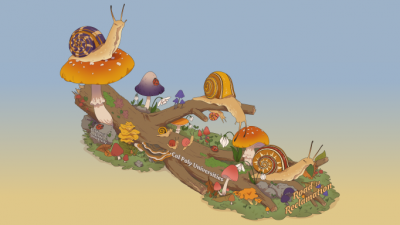 Cal Poly Rose Float has participated in the Rose Parade since 1949 and is a joint program between Cal Poly Pomona and Cal Poly San Luis Obispo. They have continuously designed, built, financed, and decorated the only student-built float entry in the Parade. Over the last 74 years, Cal Poly Rose Float has been the first to introduce innovative technologies on multiple occasions winning more than 60 Float Awards. This year, Cal Poly has taken a small, often overlooked part of nature and scaled it up to the point where viewers are the insects.  The float’s theme, Road to Reclamation, encourages the audience to take a deeper look at the nature around them. A sense of awe for the regenerative power of nature lets the audience reflect on how the ending of one phase can bring opportunity to the next. 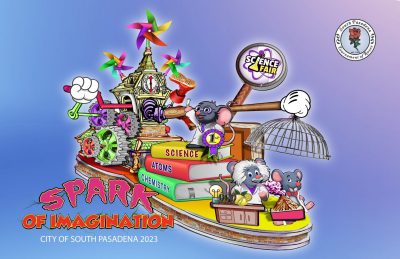 South Pasadena Tournament of Roses is the oldest self-built float in the Rose Parade, having constructed and decorated their floats since 1893 to promote community spirit and volunteerism. The 2023 entry for the City of South Pasadena, Spark of Imagination, highlights the imagination and creativity of children but with a twist, mice! The float depicts winners of the science fair, a crazy house with spinning gears and the goof clock on the house has hands that are spinning out of control. Several types of bark (eucalyptus, melaleuca and sycamore), along with sycamore and liquid amber leaves can be found on this colorful and playful float. The float also features fourteen diverse types of roses (Free Spirit, Blush, Orange Crush, Stiletto, Star 2000, Britton, Atomic, Showbiz, Voodoo, Hot Expression, Royal Explorer, Nina, Hard Rock and Full Monty). The Rose Parade float is a tradition in the City of South Pasadena that brings their community together through fundraising, building and decorating each year.

The 2023 Donate Life Rose Parade float, Lifting Each Other Up, celebrates the power of organ, eye and tissue donation, with donors and recipients working together to support one another.  A spectacular Asian street dragon is the centerpiece of the float. In Asian cultures, dragons symbolize great power, good luck and strength. They bring prosperity and abundance. A colorful dragon winds through flowering trees, lanterns and fans, and is emblazoned with 44 memorial floragraphs, representing those who have given the gift of life. The dragon will be supported on poles by living donors, and surrounded by organ, eye and tissue recipients, whose lives have been transformed and have turned the corner to a more auspicious future, thanks to those who said “YES” to organ, eye and tissue donation. A traditional paifang bridge is featured in the back of the float, with a special message in mandarin that highlights the power of the Gift of Life.

Lions International is the largest service organization in the world with 1.4 million members in 50,000 clubs. They first displayed a float in the 1948 Rose Parade and since 1992, they have continuously presented a float in the Parade. For more than 30 years, the Lions International float has told inspirational stories about how the world’s largest humanitarian service organization serves a world in need. The 2023 float features Lions and Leos planting trees, picking up litter, tending a garden with nutritious food and three ornate bridges that symbolize bringing people together and bridging the gap between local and global needs. Supporting this mission and riding on this year’s float are Lions International President Brian Sheehan and his wife, Lori Sheehan.

Join us on January 2, 2023, to experience the awe and wonder of the floats, bands and equestrian units of the 134th Rose Parade presented by Honda.