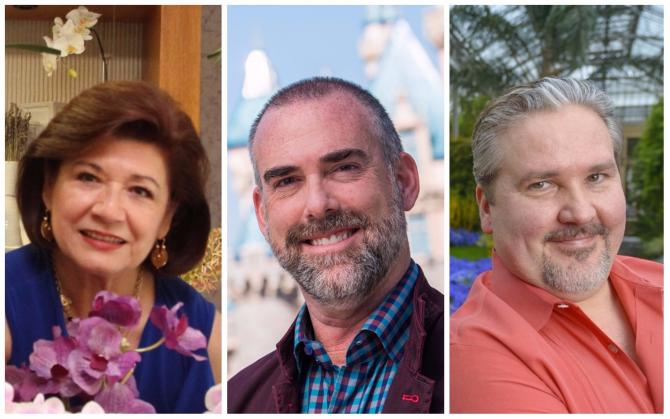 The 2018 Tournament of Roses President Lance Tibbet will announce the award-winning floats the morning of January 1, 2018, on the front steps of Tournament House.

“Being a horticultural professional, managing and owning a wholesale nursery, it’s an honor to welcome these professionals to the Tournament family,” said Lance Tibbet. “I’m excited to have these very talented members of the floral and design professions judge our floats this year.”

About the 2018 Rose Parade Float Judges

In 1996, Maru became the first Mexican accepted in the American Institute of Floral Designers (AIFD) and to get the European Master Certification (EMC) in Belgium in 2014. She is one of the very few people from Mexico that has had the opportunity to study abroad and learn from major floral designers and has worked hard to bring the EMC to Mexico. EMC has provided her colleagues with the knowledge and tools to appropriately express their feelings through flowers but applying key design elements and principles.  The EMC Family has grown in Mexico and is still growing. Maru believes it is important to promote continuous education, strengthening ties amongst industry participants.

Maru’s flower design studies started in 1969, attending different courses and seminars in the United States, Holland, France, Germany, and England. She has a Master Degree in floral design in Holland at Boerma Institute.

Bradley Kayehas been with Disney Parks Live Entertainment since 1998, starting with the Tokyo DisneySea opening entertainment design, and now as Principal Art Director based at the California Disney Resort. Key projects with Disney during his career have included parades and spectacular shows such as Under the Sea in Tokyo, Block Party Bash at Disney California Adventure, Halloween parades for both Paris and Hong Kong, and Disney floats in Shanghai Tourism Festival parades. Brad’s work can be seen daily in the resorts and theme parks worldwide along with productions on Disney Cruise Lines. He is not a stranger to the Rose Parade, having designed floats for Disney in 2006 and 2013.

In addition to Disney, he has designed for the professional theatre community during the past 25 years, including shows seen on the west coast, east coast and many points in-between. He has been the recipient of the Lifetime Achievement award from Los Angeles Drama Critics Circle among many other recognitions.

Brad volunteers his time to the Chance Theater in Anaheim, donating his time designing shows as well as having designed the lobby and marquee for their new venue. He is also on the advisory board for the Laguna Niguel Community Theatre, consulting on their shows, outreach program, and working with their volunteers in mentoring young design students.

Brad received his undergraduate Bachelor of Science from Northwestern in the School of Speech and his Master in Fine Arts in Scenic Design from Cal State Long Beach.

Jim Suttonis the Display Designer for Longwood Gardens in Kennett Square, Pennsylvania, one of the world’s great gardens, encompassing 1,077 acres of gardens, woodlands, meadows, fountains and a 4-acre conservatory complex. Welcoming 1.3 million guests per year, Longwood continues the mission set forth by founder Pierre S. du Pont to inspire people through excellence in garden design, horticulture, education, and the arts.

As Display Designer since 2007, Jim is the aesthetic gatekeeper for Longwood, responsible for conception, designing, and implementing Longwood’s renowned Conservatory displays that elevate the art of horticulture. In addition to his design role, Jim teaches courses in floral design in Longwood’s Continuing Education Program as well as frequently lecturing on horticultural topics across the country.

Jim’s aesthetic expertise and plant savvy have made him a sought-after judge at the prestigious Philadelphia International Flower Show and for the America in Bloom program, which promotes community enhancement programs through the use of flowers, plants, and trees.

In the spirit of the theme, Making A Difference, Jim made a difference as a former Peace Corps volunteer in Honduras. Not only did he implement and demonstrate techniques for soil conservation and improvement, he also taught environmental awareness during his two-year assignment. Thank you, Jim, for contributing your talents to help others.

Jim earned a Bachelor of Science in Horticulture from Pennsylvania State University.