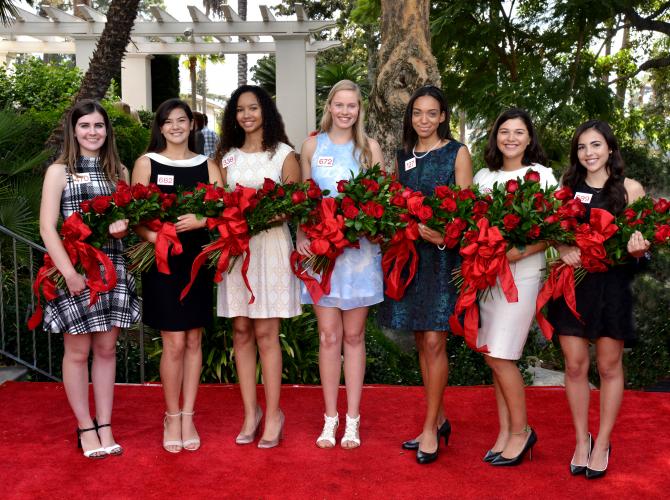 Pasadena, CA. (October 2, 2017) – Today the Tournament of Roses announced the seven members of the 2018 Royal Court. The Royal Court will attend numerous community and media functions, as ambassadors of the Tournament of Roses and the Pasadena community at large. The grand finale for the 2018 Royal Court will be riding on a float in the 129th Rose Parade® presented by Honda and attending the College Football Semifinal at the Rose Bowl Game® presented by Northwestern Mutual, both on Monday, January 1, 2018.

Nearly 1000 people applied to participate in the interview process. The Tournament of Roses Queen and Court Committee made its selections based on a number of criteria including poise, speaking ability, academic achievement, youth leadership, and community and school involvement.

The seven members of the 2018 Royal Court are (in alphabetical order):

Rose Princess Alexandra Marie Artura is a senior at Flintridge Sacred Heart Academy and lives in Pasadena. She is currently president of the National Honor Society, a National Hispanic Scholar, and a member of the California Scholarship Federation, Mu Alpha Theta and La Vanguardia. She also participates on her high school’s cross-country team. Alexandra enjoys cooking and baking with her mom, skiing with her dad and brother, watching movies, spending time with her friends, and playing the guitar. Alexandra plans to study Health Sciences and would like to go to Boston University, Georgetown, USC, UCLA and many others. Alexandra is the daughter of Darren and Carla Artura; she has one brother, Sean.

“Making A Difference means changing something for the better, not only for myself but for others and for my community,” she said. “To me personally, I think that small differences are just as important as big ones. What matters is that we have helped someone to better their own lives, and hopefully that change is a long-term one.”

Rose Princess Savannah Rose Bradley is a senior at Pasadena High School and lives in Pasadena.  Savannah is president of Xinos and Kudos of Gamma Lambda, activities commissioner for the Black Student Union and a writer for The Chronicle, the PHS newspaper. She is also involved with the Social Justice Club, Teen Court, Rose Ambassadors, and the 2018 Club.  Savannah enjoys reading, hiking, traveling, camping, and spending time with friends. Savannah plans to study social justice, criminal justice, and psychology and would like to attend CSU Fullerton, UC Irvine, Cal State LA, Cal State Long Beach, Howard University, or Marymount University. Savannah is the daughter of Nathaniel and Kelly Bradley; she has three siblings, Tyler, Jazlyn and Ella.

Rose Princess Lauren Elizabeth Buehner is a senior at Arcadia High School and lives in Arcadia. She is president of the YMCA Youth and Government Santa Anita Delegation,publicity commissioner for the AHS Senior Men and Women, and a member of the AHS track and field team. Lauren enjoys board games, reading, baking, brewing cold brew coffee at home, and volunteering with young children, both locally and internationally. She plans on studying Political Science and/or International Relations and would like to attend Columbia University, Brown University or Georgetown University. Lauren is the daughter of Earl Buehner and Fern Billingy; she has a brother, Nathaniel.

“Making A Difference means creating long-term change. The most important part of progress is not what I personally do to make it, but ensuring that it can continue, even in my absence,” she said. “Making a difference also means having an impact on others. I want to foster a relationship with the members of my community, and empower them to make positive changes in both themselves and their surroundings. I believe that working with others toward long-term goals creates limitless opportunities for improvement, and truly makes a difference.”

Rose Princess Georgia Jane Cervenka is a senior at La Cañada High School and lives in La Cañada. She is vice president of the Best Buddies club, a member of the La Canada Flintridge Youth Council, and a member of the LCHS Concert Choir. Georgia’s community involvement includes Girl Scouts and National Charity League.  She is a captain of the LCSH girls’ basketball team and has played at the varsity level for three years. Georgia enjoys working with children and animals. Currently she plans to study engineering and would like to attend University of Michigan, University of Southern California, or Vanderbilt. Georgia is the daughter of John and Kerry Cervenka; she has three siblings, Franklyn, John and Lilah.

“Making A Difference means pursuing your passions in a way that allows you to create an impact that goes beyond yourself,” she said. “It means exploring your interests and what you love to do by setting an example for others to look to as inspiration and motivation. However, you don’t have to change the world to make a difference. Something as small as performing a simple act of kindness can result in the greatest repercussions. Making a difference is not always easy, but it is perpetually needed and infinitely rewarding.”

Rose Princess Julianne Elise Lauenstein is a senior at La Cañada High School and lives in La Cañada. She is a member of the French Club at LCHS and attends various Chamber of Commerce events serving as an ambassador. Julianne has been a dancer for 13 years, trained in ballet, tap, jazz, contemporary, and lyrical styles. She is a volunteer on the surgical recovery floor at Huntington Memorial Hospital, and a member of the Glendale Chapter of National Charity League. She enjoys cooking and baking, and playing the piano. Julianne plans to study biology or human physiology and would like to attend Boston University or University of Washington. Julianne is the daughter of Peter Lauenstein and Teri Daly Lauenstein; she has two brothers, Thomas and Michael.

“Making A Difference in my community has always been an important part of my life. I have grown up watching my parents volunteer and contribute to our community,” she said. “I have been blessed and afforded many wonderful opportunities and believe it is my duty to help others in need and improve my community. By volunteering, we can bridge economic and social gaps and learn to appreciate the value that we all possess.”

Rose Princess Isabella Marie Marez is a senior at La Salle High School and lives in Altadena. She is a leadership service commissioner at LSHS and a Youth Ministry leader. Isabella is a member of Support Our Troops Club, Key Club, Unbreakable Club, Hispanic National Honors Society and National Arts Society. She also serves as a Junior Ambassador for Children’s Hospital Los Angeles. She participates in varsity softball, varsity golf and a travel/club softball team.Isabella enjoyspainting, singing, golfing and hiking. She plans on studying social justice and human anatomy and would like to attend Seattle University, Manhattan College, Regis University, Villanova University, Drexel University, or Sarah Lawrence College. Isabella is the daughter of Jesse Marez and Christine Marez; she has four siblings, Alexandra, Jennifer, Justin and William.

“This year’s theme Making A Difference means a lot to me,” she said. “When I first heard about it I was very excited because making a difference is something I do every day within my school, family, and community. It’s out of compassion and respect for that person as another human being.”

Rose Princess Sydney Grace Pickering is a senior at Arcadia High School and lives in Arcadia. She is dance captain of the Orchesis Dance Company, serves on ASB as performing arts commissioner, and serves as chair of the Student Counsel Apache Commission. Sydney has been a Girl Scout since kindergarten and is currently working on her Gold Award. She enjoys gardening, reading, drinking boba with friends, and watching Netflix. She plans to study International Relations or Global Studies and would like to attend Georgetown or UCLA. Sydney is the daughter of Brad and Mary Pickering; she has one brother, Wesley.

“To me, Making A Difference is about the ability to bring people together through acts of selflessness, kindness, and compassion,” she said. “It is about giving generously to others and not expecting anything in return. As a princess on the Royal Court, making a difference is about inspiring involvement, joy, and appreciation in community members.”

The Announcement and Coronation of the 100th Rose Queen® and Presentation of the Royal Court is on Wednesday, October 18, 2017 at the Pasadena Playhouse; the event is sponsored by Citizens Business Bank. A limited number of tickets are available for purchase from Sharp Seating Company.