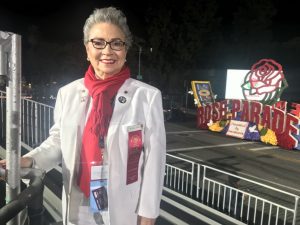 Please, give us a brief introduction.

Hello. I am a native Angeleno, 1st generation. My mother and her family came to this country in 1923 from Mexico and settled in Los Angeles. My grandfather was concerned for his family’s safety due to the uncertainty of the government and religious persecution. My grandfather and his three older sons opened and ran a mom-and-pop grocery store in central Los Angeles. My mother went through the Los Angeles Public School System, where she met my dad who was 2nd generation; his parents came from Mexico. I wanted to be a secretary as my mother had been, so I followed her footsteps by taking secretary courses in high school and at Los Angeles City College. My first job was in January 1961. I never dreamed then that I’d still be working full-time today. I met my husband of 53 years at LACC in 1960; he left for the Air Force serving four years, including Vietnam. When he returned, he started work in the airline industry while I worked in a bank in downtown LA as a secretary. We married in 1968 and settled in Inglewood since it was close to the airport and affordable. With his job, we were able to travel all around on airline passes. In 1972, we purchased our current home in Pasadena. After our daughter was born, my husband thought I might want to work as a travel agent, and in 1976 I started helping a travel agent owner friend of his. Since then, I have been in the travel industry and still loving it even after this very challenging Covid period. We had our own agency throughout the ’90s, but the airline compensation was changing, and I moved on to my present employer in 2001.

What was your first experience with the Rose Parade?

When we moved to Pasadena, I did not realize that we lived in the “Formation Area.” We soon found out when our area was blocked off during our first New Year’s Eve. We got excited walking up to Orange Grove, two blocks from our house, to see the floats all lined up. My husband suggested that I should join. That was my first interaction with the Tournament of Roses, and eventually, I joined in 1994. I knew at my age, I would not have many years with the Association, but I wanted to make the most of it. My first assignment was Formation, and I was stationed four blocks from my house. I woke up New Year’s Eve morning with a queasy stomach but did not want my family to know. I took my assignment and worked all night. It was the flu!

Every assignment was exciting, and I have good friends from my class of ’94. My last assignment on the Big 3 was Parade Ops., and my float was positioned two blocks from my house. After the big three committees, I can’t remember the name of the committee, I was down at the Century Plaza Hotel assisting the Sports Media. The following year I was assigned to Queen and Court and had two terrific Chairs. Those two years were unbelievable. Our first try-out date was only a few days after 9-11, and needless to say, we were all very nervous. After Queen & Court, I was assigned to Alumni Social Media, then to Host. After one year, I was moved to Exec Committee as an At-Large Member. I don’t know who enjoyed that assignment more, me or my husband. After two years, I had one year left and was asked back to Host. I had some wonderful assignments and enjoyed every single one.

The Tournament of Roses has been the best membership organization I have ever been involved with. I am a people person (you think?), and the tournament has been good to me. I’ve always been treated fairly and always enjoyed working on whatever assignment I was given, and then volunteered many others. Being a member, I feel as I’m an ambassador to those outside of Pasadena. When I travel, I always have stick-on roses to pass around.

There are so many special things about Pasadena. I only have to say, “I’m from Pasadena,” and the response will always be, where the Rose Parade and the Rose Bowl Game are. I’ve lived here for 49 years and always talk about the Parade and Game.

What are some of the benefits of being a Tournament Auxiliary Committee (TAC) member?

When it came to joining TAC, I wasn’t too sure since I really felt I could contribute some more active years. Then I realized the opportunities that TAC gave us “aged out” members. I wanted to volunteer for as many assignments as possible, which I did the first years. But now, I have three that I work every year; the Front Desk between Christmas and New Year’s Eve, Music Committee assisting Band Fest members in the Press Box at PCC for all three performances and, finally, on Parade Day with VIP Grandstands. There I see, greet, and hug friends and visitors; it’s the culmination of everything. I enjoy walking back to my house and having people, complete strangers, want to shake my hand and thank me for the Parade. Acquaintances will ask me, “when will you be President?” I tell them I started too late. Otherwise, I might have been. That says it all.

What are your passions outside of Tournament?

In the 90’s I joined Rotary of South Pasadena and became its second woman President in 1999. Now, most of my volunteer work is at my Parish Holy Family, South Pasadena. We’ve been members since we moved to Pasadena in ’72. My daughter graduated from there, her son in ’17, and her daughter is entering the 4th grade. I volunteer in various ministries, in front of and behind the scenes. I started volunteering at the school when my daughter started and guess I have never stopped. My daughter was a member of the Tournament of Roses for a short while before her son was born. At the time, we were the first mother/daughter combo and were featured in an article in the Star-News.

What’s one thing people would never guess about you?

In high school, I was the “company commander” of our 160-girl drill team. It was quite an accomplishment in those days, working on a different drill each week to perform on the football field for halftime entertainment. It was a challenge, but fun. I still have the gold whistle charm I was given at graduation.

What does Hispanic Heritage Month mean to you?

Growing up in Los Angeles, we were not classified in ethnic terms. I knew my family came from Mexico, spoke Spanish to my grandparents, and I considered myself an American of Mexican descent. In later years there were so many divisions, sub-divisions. In high school, I was asked why I spoke Spanish to bilingual students. I said because I’m Mexican. The first thing they’d say was, “But you don’t look Mexican” because of previous stereotypes. But now Hispanic Heritage Month means a lot to me because the years of the past are a thing of the past. I am very proud of my background, and we are no longer in the background.

What kind of community practices did your family develop while growing up?

My parents were always involved in giving back to the community. My father was an architect and donated his time and talents, especially in East Los Angeles, where he grew up. My mom, from the time I can remember, was volunteering, starting a Brownie troop, driving the Nuns from my parish grade school on errands because they could not drive, and was president of the mother’s club. My sisters and I grew up with a sense that we need to volunteer our time and talent whenever possible. I did the same, started a brownie troop for my daughter, parent’s guild, and still volunteer.