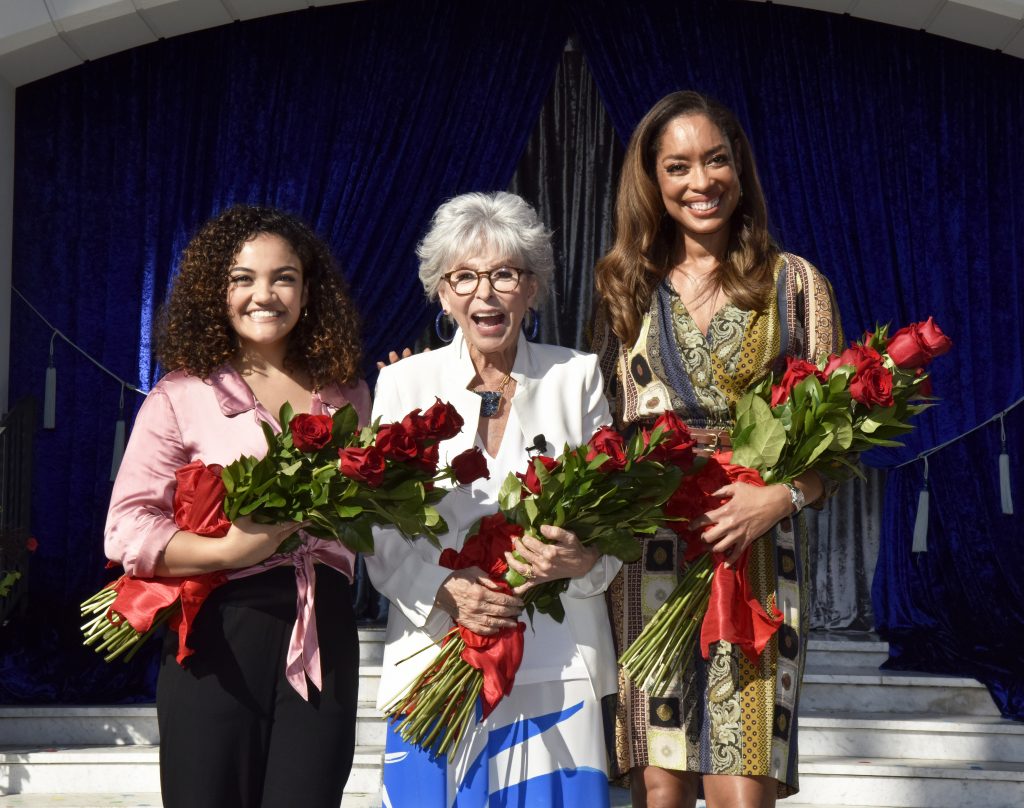 PASADENA, Calif. (October 15, 2019) – Rita Moreno, Gina Torres and Laurie Hernandez were announced today as the 2020 Grand Marshals by Tournament of Roses® President Laura Farber. They will ride in the 131st Rose Parade® presented by Honda, themed “The Power of Hope” and join in the pre-game celebration of the 106th Rose Bowl Game® presented by Northwestern Mutual both are held on January 1, 2020.

“The 2020 theme is ‘The Power of Hope.’ With hope, we can aspire to do better and inspire others to reach higher; hope never quits; with hope anything, in fact everything is possible,” Farber shared. “Rita Moreno, Gina Torres, and Laurie Hernandez epitomize hope. Through their talent, efforts, persistence, and dedication, they have achieved excellence and have given back to the world stories of hope, dreams fulfilled, dignity, respect and inspiration.  They have provided el Poder de La Esperanza para todo el mundo!”

Rita Moreno has received four of the most prestigious awards in show business; an Academy Award®, a Tony Award®, two Emmy® Awards, and a GRAMMY® award. Her credits span more than six decades, beginning on Broadway at age 13. A recipient of the Kennedy Center Honor for her lifetime contributions to American culture, Moreno was also awarded the Presidential Medal of Freedom by President George W. Bush and the National Medal of Arts by President Barack Obama. In addition to her film, stage, television and concert accomplishments, Moreno gives her voice to important causes, including racial equality, hunger, early childhood education, as well as health issues like HIV, breast cancer, heart disease and diabetes. Moreno was among many celebrities to take part in the historic March on Washington on Aug. 28, 1963 and has since been involved with many civic, cultural and charitable organizations, including the Jackie Robinson Foundation, the National Endowment for the Arts and the President’s Committee on the Arts and Humanities.

Well-known for her roles on Suits, Alias, Firefly and Westworld, Gina Torres was born in Manhattan to a close-knit Cuban family and raised in the Bronx. Gina’s character, Jessica Pearson, on USA Network’s hit original series Suits garnered award-winning success which lead to the spinoff series, Pearson. Currently she is staring in the lead role and executive producing Pearson, which sees her Suits character take on the world of Chicago politics. The role of Jessica has been a life changing one, earning Gina the National Hispanic Media Coalition’s Award for Outstanding Performance in a Television Series and the Visionary Award from the LA Femme Film Festival. Before entering the world of acting, she studied opera and jazz as a vocal major which lead her to appear in plays and musicals on Broadway, being directed by such legends as Tommy Tune and Pete Masterson in Best Little Whorehouse Goes Public and Jerry Zaks in Face Value. In addition to her work on television and Broadway, Gina’s film credits include The Matrix Reloaded, The Matrix Revolutions and Sundance Film Festival Critics Choice, Don’t Let me Drown. Gina enjoys giving back through several philanthropic organizations; Heifer International, Dress for Success, Planned Parenthood and Save the Children.

Laurie Hernandez earned Olympic Gold and Silver medals as a member of the 2016 U.S. Olympic Women’s Gymnastics Team. Laurie is a second generation American, her grandparents are Puerto Rican, making her the first U.S. born Latina to make the U.S. team since 1984. Following her win at the Summer Olympics, she earned another title, champion on ABC’s Dancing with the Stars. In 2017, Laurie became an inductee into the USA Gymnastics Hall of Fame and was recognized as the 2018 Nickelodeon Kids Choice Sports Biggest Kid. Most recently, Laurie served as a cohost of America Ninja Warrior Junior, and as the voice of Valeria on Nickelodeon’s Middle School Moguls. Laurie is the author of two books; “I Got This: To Gold and Beyond” chronicling her journey thus far and a children’s picture book “She’s Got This,” each appearing on the New York Times Best Sellers list. When not in the gym, Laurie serves as Global Ambassador for Stomp Out bullying and travels the country inspiring young gymnasts and speaks to the next generation about following your dreams. Laurie will go for the gold again at the 2020 Olympic Games in Tokyo.