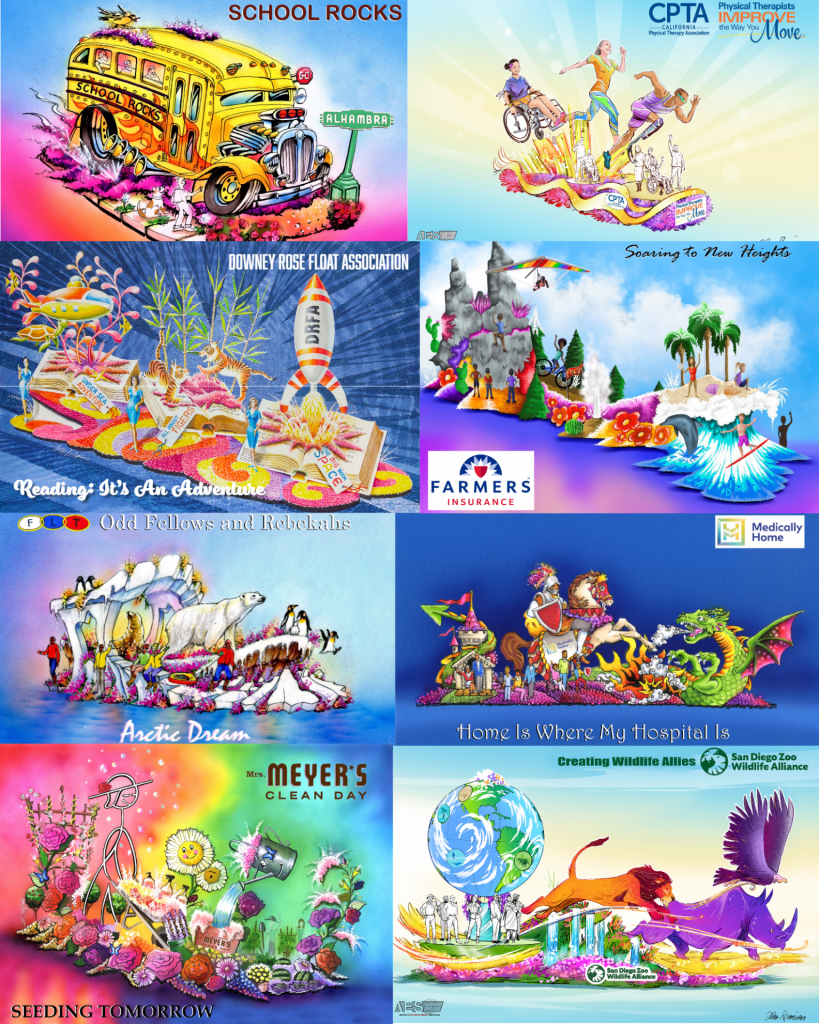 PASADENA, Calif. (October 21, 2021) – As the Pasadena Tournament of Roses® and our community partners enter the final stretch leading up to the 2022 Rose Parade® presented by Honda, the third in a series of sneak previews of floral float entries reveal the spectacle that awaits streetside and worldwide broadcast audiences on Saturday, January 1, 2022.

The California Physical Therapy Association (CPTA) float entry recognizes the 100th anniversary of its national organization, the American Physical Therapy Association (APTA), by celebrating the impact that physical therapists and physical therapist assistants have on the lives of persons of all ages and abilities. The float showcases the kinetic energy of three larger-than-life individuals thriving as they return to meaningful activities such as school, sports, or work after receiving physical therapy. From adapting to prosthetic limbs and spinal cord injuries to restoring mobility after knee surgery, “Physical Therapists Improve the Way You Move.” (Artistic Entertainment Services)

The City of Alhambra’s 93rd float entry emerged from a citywide art contest open to all students K-12 that reside in the City of Alhambra. The city’s iconic green art deco sign serves as the guidepost for a classic yellow school bus that has been souped up in the shop. As the bus makes its way down the boulevard, oversized racing slick tires, a chrome bumper and grill, blown big block engine, custom silver exhaust pipes and classic flame paint job bring to life a refrain heard in classrooms and playgrounds worldwide: “School Rocks!” (Phoenix Decorating Co.) 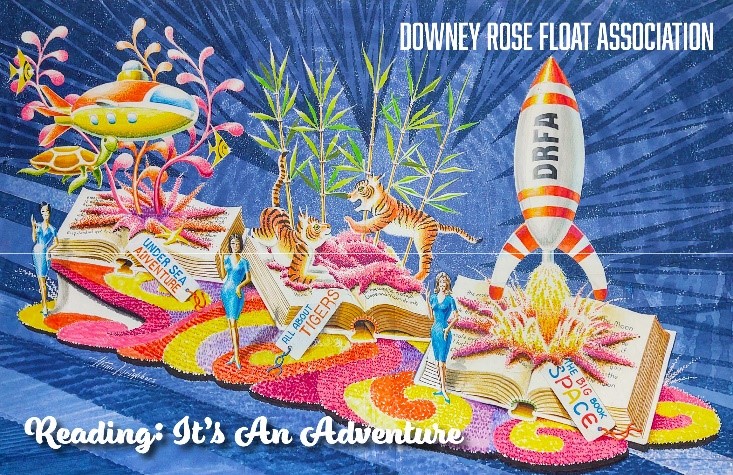 Reading is a foundation for not only learning, but also as fuel for the imagination to run wild. Pouring through pages of books expands knowledge, promotes creativity and makes dreams seem achievable. Downey’s 68th float entry presents three storybooks, each offering promising a dramatically different journey. A 1950s-era rocket blasts off from the first book, followed by two tigers frolicking in the jungle. An underwater scene emerges from the third tome, with a colorful submarine and turtle traveling through the ocean. From the stars to a safari to under the sea, “Reading: It’s An Adventure.” (Self-built)

The 2022 Rose Parade float from Farmers Insurance® celebrates employees and agents “Soaring to New Heights” with courage, commitment, and confidence. Through dedication and perseverance, they achieve their dreams, from surfing huge waves and climbing mountain peaks, to soaring through the sky on a hang glider and navigating rough terrain to cross a finish line. As with all Farmers® floats, these scenes come to life with lush, vibrant flowers, and dynamic elements, such as a shooting geyser. “Soaring to New Heights” merges the beauty of nature and the satisfaction of dreaming big, believing boldly, and achieving greatness. (Phoenix Decorating Co.)

The inaugural float entry from Medically Home depicts the heroic journey undertaken to deliver a new era of hospital-level care for millions of patients and their families. “Home Is Where My Hospital Is” represents the dragon of herculean obstacles that had to be overcome to safely hospitalize patients in their homes. The float symbolizes the spirit of perseverance of everyone involved to achieve this impossible dream– a global movement on behalf of patients. (Phoenix Decorating Co.)

Mrs. Meyer’s Clean Day has created inspiring, garden-scented products rooted in goodness found in clean and happy homes since 2001. This year, Mrs. Meyer’s float portrays a charming garden featuring its iconic “line lady” guiding a floral wheelbarrow overflowing with garden-inspired scents. The float is crafted with the same flowers and herbs that inspire Mrs. Meyer’s limited edition spring scents including Mint, Lilac, Rose and, the newest scent in its collection, Daisy. The 55-foot floral celebration is complete with a spray of water flowing from a lovely silver watering can, signaling Mrs. Meyer’s love of nature, regrowth of spring and optimistic hope for the future of our planet. (Phoenix Decorating Co.)

“Arctic Dream” commemorates polar exploration and calls attention to the importance of the polar regions to our climate. As they explore aboard the Odd Fellows & Rebekahs’ 71st Rose Parade float entry, members encounter wildlife found at the North and South Pole. While encountering polar bears and penguins at once is possible only in a “dream,” they are sending us an early warning of the dangers facing us all. Achieving the dream of a secure future for polar bears and penguins will benefit all life on earth. For more information visit https://polarbearsinternational.org. (Phoenix Decorating Co.)

San Diego Zoo Wildlife Alliance is an international conservation organization committed to making connections between people and wildlife every day at the San Diego Zoo and Safari Park. The theme, “Creating Wildlife Allies,” celebrates their dedication to wildlife in eight conservation hubs on six continents. Their veterinarians, nutritionists, researchers and wildlife care specialists work not only at the Zoo and Park, but also alongside over 200 partners around the world. The float proudly represents their history and passion for conservation by highlighting the Lion, Rhino and Condor. By working with partners around the world, San Diego Zoo Wildlife Alliance is creating greater outcomes for wildlife for the next generation and beyond. (Artistic Entertainment Services)