PASADENA, Calif. (July 22, 2021) – As the Pasadena Tournament of Roses® and our community partners actively plan for the 2022 Rose Parade® presented by Honda, the second in a series of sneak previews of floral float entries points to the joy America’s New Year Celebration® will bring to a worldwide audience on January 1, 2022.

For more than 130 years, colorful florals, thematic interpretation and creative designs have been hallmarks of Rose Parade floats, and this year’s entries will continue the tradition. The theme of the 133rd Rose Parade — “Dream. Believe. Achieve.” — inspired the official renderings for fifth-year float participant The UPS Store and five longtime mainstays – Burbank Tournament of Roses Association, City of Hope, La Canada Flintridge Tournament of Roses Association, Lutheran Hour Ministries and Torrance Rose Float Association – with 313 appearances between them.

The six float concepts range from whimsical to realistic to heartfelt, reflecting the range of spectacular, supersized stories that have been embraced for generations. They are among dozens of commercial, non-commercial and self-built floats that will make the 5.5-mile procession along Pasadena’s historic Colorado Boulevard on New Year’s Day 2022. 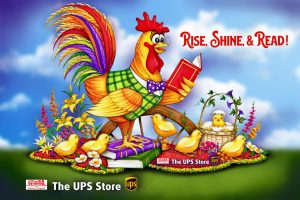 The UPS Store float, themed “Rise, Shine & Read!” celebrates the positive impact literacy can have on a child’s ability to succeed and showcases the company’s support of the Toys for Tots Literacy Program. Reading starts at home, and the float’s animated design features a colorful, spectacled rooster standing atop a stack of books, reading to his family of young chicks. Being built by Fiesta Parade Floats, The UPS Store 2022 Rose Parade float inspires children to rise up and let themselves shine bright through the power of literacy. Through reading, children can explore, imagine and dream. 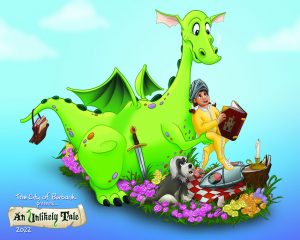 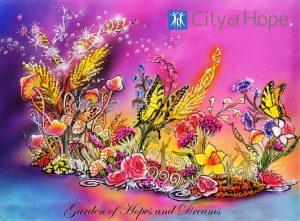 City of Hope’s 48th Rose Parade float entry, “Garden of Hopes and Dreams,” continues the world-renowned cancer research and treatment center’s tradition of spotlighting unwavering belief, perseverance and leadership in health care transformation. The 50-foot long and nearly 17-foot-tall float built by Phoenix Decorating Company will feature animated butterflies, which are symbols of hope and transformation. Whimsical mushrooms will punctuate rebirth after a chaotic time, a metaphor for the sustained battle patients and their health care teams have against cancer, as well as a respectful nod to the dreamed-about eventual end of the COVID-19 pandemic. Cancer survivors will be on the float to ring in the new year standing next to daffodils — early springtime flowers that indicate winter is over. 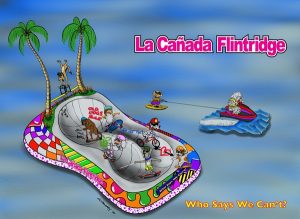 The La Cañada Flintridge Tournament of Roses Association’s 43rd entry, “Who Says We Can’t” will again be one of only six self-built floats in the entire parade. Designed, built, decorated and operated entirely by volunteers, the entry answers the age-old adage, “You can’t teach an old dog new tricks.” La Cañada Flintridge resident Grant Delgatty’s design celebrates accomplishment against the odds and dreaming and believing in achievement, even when others say you can’t. So, as the world fully reopens thanks to the efforts of heroes in many walks of life, to all the doubters and nay-sayers of the world we say, “Who Says We Can’t.” 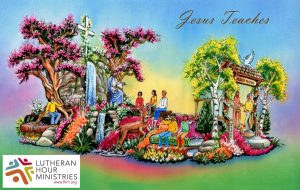 Now in their 71st year, the Lutheran Hour Ministries (LHM) float continues to share the Good News of Jesus Christ with millions of parade viewers around the world. Themed “Jesus Teaches” and built by Phoenix Decorating Co., the float features Jesus with 12 modern day disciples in a lush, woodland setting. They are surrounded by books of Jesus’ teachings; trail markers noting attributes that guide our daily lives including joy, peace, love and kindness; and a cross firmly fixed to solid rock. LHM invites viewers to experience the hope and love found in Jesus, as well as join the Petal Pushers, a volunteer group that decorates eight to 10 Rose Parade floats annually (www.petalpushers.org). 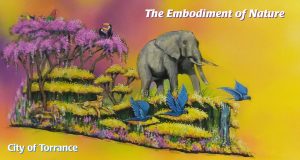 The Torrance Rose Float Association is proud to submit the 66th entry for the City of Torrance, “The Embodiment of Nature.” The conceptual design was chosen through a contest open to high school students within the City of Torrance. The majestic African elephant and the colorful toucan highlight the warmth and beauty of the animal kingdom while promoting awareness of endangered species, the perils they face, and the realities of habitat destruction, pollution and the shrinking of rain forests. This inspirational display, to be built by Fiesta Parade Floats, encourages everyone that if we believe it, we can achieve the dream of providing protection and safety to animals and the places they call home.