The No. 6 Oregon Ducks, champions of the Pac-12 Conference, and the No. 8 Wisconsin Badgers will face each other in the 106th Rose Bowl Game presented by Northwestern Mutual at 1 p.m. PT/4 p.m. ET, on January 1, 2020, at the Rose Bowl Stadium. 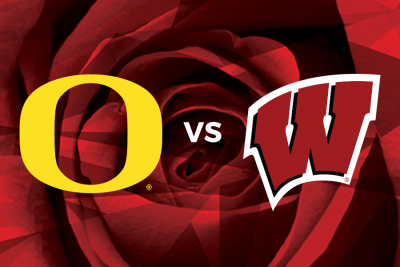 “The Tournament of Roses is ecstatic to have a top-10 matchup in this year’s Rose Bowl Game,” said Pasadena Tournament of Roses President Laura Farber. “Oregon and Wisconsin have been among the best teams in the country all season and we look forward to hosting them in Pasadena at The Granddaddy of Them All.”

Oregon won its 12th Pac-12 Championship with a win against Utah, 37-15, on Friday and finished the season 11-2 overall and 8-1 in conference. The Ducks will be making their eighth appearance Rose Bowl Game, with their last New Year’s Day win in Pasadena taking place in 2015 against Florida State in the College Football Playoff Semifinal at the Rose Bowl Game.

Wisconsin finished the season 10-3 with a 7-2 mark in Big Ten to win the Big Ten West. The Badgers will make their 10th appearance in the Rose Bowl Game and are 3-6 in Pasadena on New Year’s Day. Wisconsin most recently appeared in three straight Rose Bowl Games from 2011-2013.

Pre-game festivities on January 1, will begin at 1 p.m. PT (4 p.m. ET). The game will be televised nationally on ESPN.

Additional tickets for the Rose Bowl Game will go on sale on Tuesday, December 10, at 9 a.m. PT online via www.ticketmaster.com.