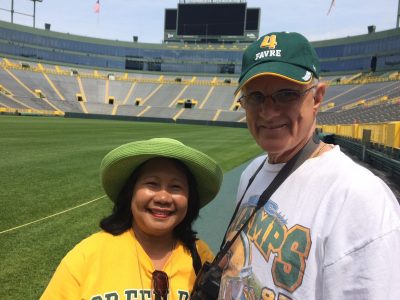 Born, raised and educated in the Philippines, Luz dreamt of living in the U.S. Her parents, as lifelong educators, encouraged her to follow in their footsteps, and it was their support that planted a seed and sent Luz down her path.

Meanwhile, 10,646.3 miles away, Bob and his family of Wisconsiners were settled in California, discovering the joys of the west coast sunshine over the freezing temperatures of Wisconsin. His father moved to California from Antigo, Wisconsin at the age of 12, and although California has always been Bob’s home, his Wisconsin roots run deep, including his inherited love of the Green Bay Packers. (Fun fact, with two shares in his name, Bob is one of the proud owners of the NFL fan-owned team.)

Back in the Philippines, Luz started her teaching career as an elementary school teacher by day and a college professor at night. Several years into her career and after being named Teacher of the Year, Luz was selected by the Nigerian Embassy to teach in Nigeria. That set the stage for her childhood dreams to come true as she traveled to major cities in Europe, Asia and North America. And, after five and a half years of teaching in Nigeria, Luz moved to the United States, where she first worked in Texas before making her way to California. Once here, she taught at Vermont Avenue Elementary School in Los Angeles for 25 years, where she received the 2000 ECCLA/USC Teacher Award and the United Teacher Los Angeles Platinum Apple Award.

Meanwhile, Bob found his life adventure in public safety, where he worked his way up to Deputy Sheriff with the Los Angeles County Sheriff’s Department, a title he held for 18 years. Following his retirement in 2008, Bob worked as a private investigator for 10 years and then in Loss Prevention for another 14 years.

Their love of community and service is one of the connections that brought Bob and Luz together, and today, this couple who found their way to common ground and each other, have made a beautiful life together in sunny Southern California. Bob took Luz to her first Rose Parade in 2002, and then in 2007, he turned in his brown/green Sheriff’s uniform for a White Suit by becoming a Member. Before long, he was bringing home so many wonderful stories of fun and friends that Luz decided to become a member in 2009.

Together, Bob and Luz have found forever friends within the Tournament community, especially the members of the Heritage Committee, who Bob has gotten to know over the past 10 years as they’ve led House Tours together. Luz even shares her newfound passion for oil painting with the Tournament. She recently made an oil painting depicting the journey of Tournament of Roses Past President Bob Miller and his family down the Parade route.

This month, as we recognize, celebrate and honor diverse groups, including Asian Americans, Native Hawaiians and Pacific Islanders, we asked Luz about heritage and what it means to her. “Heritage means celebrating the lives of those who made remarkable contributions to the betterment of my people, acknowledging the sacrifices and struggles of our trailblazers, understanding the history, customs and traditions of my people and taking conscious efforts to pass them to future generations,” said Luz, who teaches folk dances, makes authentic Filipino costumes, cooks Filipino dishes with traditional home-grown vegetables, sings karaoke and leaves her footwear outside the house.

And heritage means a lot to her husband too. Bob says that after doing a deep dive into his family history seven years ago when he visited Wisconsin, he’s learned that heritage means acknowledging his history, the history of others and their practices.