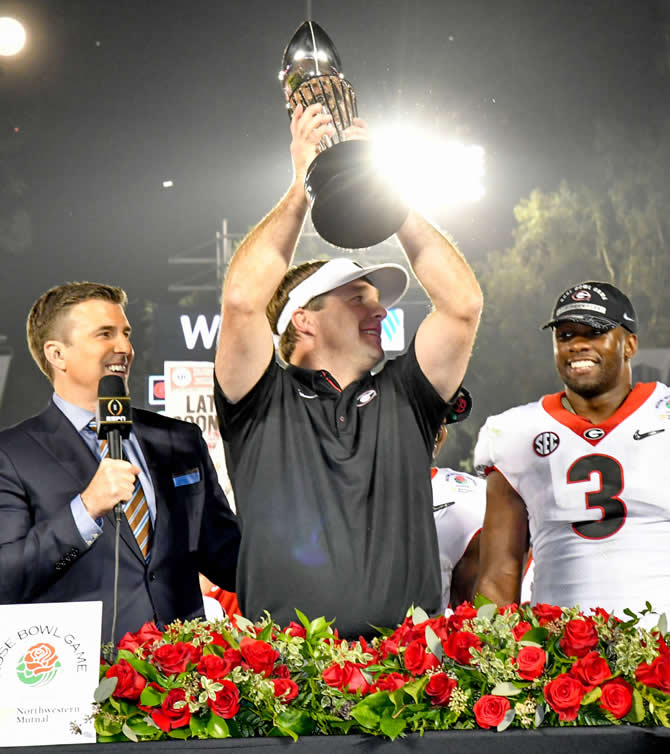 Occasionally, 60 minutes isn’t enough time to determine a football game. In the 103 previous editions of the Rose Bowl Game, overtime wasn’t needed. But the 104th edition of the Granddaddy of Them All would break the overtime barrier, not once, but twice on the way to a Georgia Bulldogs 54-48 victory over the Oklahoma Sooners.

Oklahoma nearly took a 17-point lead, 31-14, into the locker room at halftime, but one play seemingly changed the momentum of the game. With six seconds left in the first half, the Sooners scored on a trick-play, a receiver reverse pass, resulting in a touchdown pass from CeeDee Lamb to quarterback Baker Mayfield. On the ensuing kickoff, Oklahoma attempted a squib-kick, but it was snagged by one of the Georgia defenders near mid-field. The Bulldogs ran one play and set up for a Rose Bowl Game record 55-yard field goal attempt, which was converted by kicker Rodrigo Blankenship to cut the Sooner lead to two scores, 31-17.

That momentum carried over into the third quarter as the Georgia defense came alive. The Bulldogs held the No. 1-ranked Sooner offense to 29 total yards and just two first downs in the third stanza. Offensively, Georgia continued to have success running the ball and tallied two more long touchdown runs. Running back Nick Chubb broke several tackles on UGA’s first play in the second half on a 50-yard touchdown run. Running back and Offensive Player of the Game Sony Michel added a 38-yard dash to the end zone to tie the game, 31-31, heading to the fourth quarter.

A Mayfield interception on the first play of the fourth quarter set Georgia up inside the Oklahoma redzone. Two plays later, Georgia appeared to complete the comeback as a touchdown pass from quarterback Jake Fromm to receiver Javon Wimms gave the Bulldogs their first lead of the day, 38-31.

But football is a game of momentum and it would shift the Sooners direction. Mayfield proved why he was the Heisman Trophy winner as he led Oklahoma on an 88-yard touchdown drive, accounting for 47 yards through the air and 22 yards on the ground, including an 11-yard touchdown pass to fullback Dimitri Flowers to tie the game at 38-38. But it wasn’t tied long.

Four plays into the Bulldogs next drive, Michel fumbled. Oklahoma safety Steven Parker scooped up the loose ball, ran 46 yards for a touchdown, and gave the Sooners the lead, 45-38, with less than seven minutes in the game.

Unnerved by the enormity of the moment, Fromm and Georgia took over from their own 41 yard-line. The freshman quarterback orchestrated a drive that moved down the field quickly, with passes of 15 yards to receiver Terry Godwin and 17-yards to Michel. After a pass interference penalty in the end zone that set the ball at the two-yard line, Chubb took a direct snap and went into the end zone untouched to tie the game, 45-45.

Oklahoma moved the ball near midfield in the final seconds of the game, but was forced to punt. Georgia took a knee to end regulation and for the first time in 104 years of history, the Rose Bowl Game was headed to overtime.

In the first overtime, neither Georgia or Oklahoma could muster a first down as they both traded field goals.

Oklahoma got the ball first in the second overtime and moved the ball to the 10-yard line before being held to a field goal attempt. The 27-yard attempt was blocked by Georgia linebacker Lorenzo Carter, who leapt through the right side of the Oklahoma line and tipped the ball with an out-stretched right arm.

Georgia took over from the 25 yard-line, needing only a field goal to win. But two plays later, Michel took a direct snap and ran left, where he picked up a key block from Fromm, and waltzed into the end zone from 27-yards out to end one of the most entertaining Rose Bowl Games to date.