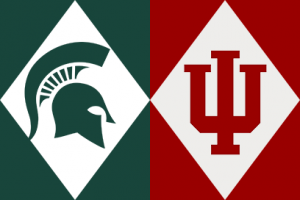 Michigan State and Indiana have each had a reversal of fortunes from their preseason expectations. The Hoosiers were the preseason sweethearts of the Big Ten East, while the Spartans have turned out to be Cinderella.

Despite being picked to finish last in the Big Ten East to start the year, Michigan State is off to a 6-0 start and are ranked in the top-10 in both major polls. Junior transfer running back Kenneth Walker III has played a major role in the turn-around and is considered a Heisman favorite through six weeks. Walker leads the nation with 913 rushing yards and has scored nine touchdowns this year. Sophomore quarterback Payton Thorne and the receiving duo of Jayden Reed and Jaylen Nailor have created balance on offense. The Spartans feature a bend, don’t break style of defense. MSU ranks near the bottom of the country in passing yards allowed but surrender just 19 points per game.

When Indiana takes the field on Saturday, Michigan State will be their fourth top-10 opponent in six games, with two more top-10 teams coming in the next three weeks. The Hoosiers are likely better than their 2-3 record but have had a brutal schedule to start the year. Junior quarterback Michael Penix Jr. was a major reason for their success in 2020 but injured his knee late last season and it doesn’t seem like he’s fully recovered. Junior Jack Tuttle has played in three games already this season and may start against the Spartans. Graduate transfer running back Stephen Carr has run for 100 yards in both wins this season. Defensively, Indiana relied on turnovers for their success in 2020, but have struggled to force turnovers this season.

Since 1950, these two teams have played for a trophy, the Old Brass Spittoon. Indiana currently holds the Spittoon after a 24-0 win last season, but Michigan State has won 14 of the 18 meetings since 2000. 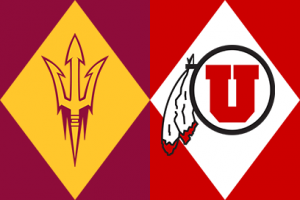 The two undefeated teams in the Pac-12 South will meet under the lights in Salt Lake City. A win would give either team a leg-up in the battle for the South division crown.

Arizona State has become a regular in the Pac-12 Game of the Week. The Sun Devils have responded well and rattled off three straight wins over conference foes, are 5-1 overall and check-in at No. 18 in the AP Poll. Junior quarterback Jayden Daniels continues to be one of the most explosive players in the conference, while senior running back Rachaad White leads the Pac-12 with nine rushing scores. When the offensive success is combined with the No. 1 scoring and overall defense, Arizona State is a living up to their preseason pick to win the division. The Sun Devils have stifled opponents passing attacks this season, ranking in the top-20 nationally in passing yards allowed, passing defense efficiency and sacks.

After a 1-2 start, Utah has won two straight to get back on the right side of .500 at 3-2. Last week, the Utes defeated USC in Los Angeles for the first time since 1916, six years before the Coliseum was built. Sophomore quarterback Cameron Rising has been the architect of the last two wins since taking over as the starter. Rising threw for a career-high 306 passing yards in the historic win over USC, the first Ute to throw for more than 300 yards since 2019. As a unit, the Utah defense ranks No. 3 in the Pac-12 this season and ranks No. 41 in the country. The Utes are also among the best in the league when it comes to tackles for loss and sacks per game.

On paper, this is quietly one of the most-anticipated Pac-12 matchups of the season as the league’s third-best defense in Utah will go up against the No. 2 offense of Arizona State. The game is a coin flip, but a chilly Utah evening may favor the Utes. 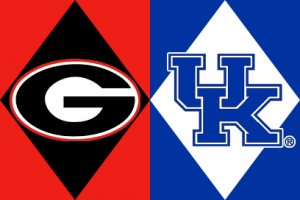 Two of the top-ranked teams in the SEC will meet in Athens, Ga., for what should be a true defensive slugfest. ESPN’s College GameDay will be on campus in Georgia for the second time in three weeks.

Kentucky is looking to start a season 7-0 for the first time since 1950. The Wildcats have won four games this year by seven points or less but beat LSU 42-21 last week. The 42 points were the most they’ve ever scored against LSU, led by junior transfer quarterback Will Levis, who was named National Offensive Player of the Week in the win. A major reason for Levis’ success has been fellow transfer Wan’Dale Robinson, a junior receiver who transferred from Purdue. Robinson leads the Wildcats in receiving and has seven plays of 30 yards or more. The Kentucky defense has improved over the last year and ranks inside the top-20 nationally in scoring defense and total defense.

The Bulldogs have emerged as the best team in the country and are ranked No. 1 in the AP and Coaches Polls for the first time since 1982. The biggest factor in Georgia’s success has been their dominating defense. The Bulldogs have allowed just 33 points all season and the defense has only allowed two touchdowns through six games, which is the same number of touchdowns the Georgia defense has scored. Historically across all stats and metrics, this year’s edition of the Georgia defense could go down as the best in the history of college football. But the Bulldogs aren’t just great on defense, their offense has been explosive as well. Georgia ranks 11th nationally in scoring offense, averaging 39.8 points per game. Senior quarterback Stetson Bennett has started the last two games and led the Bulldogs to victory over ranked teams.

Will the Georgia defense continue to reign supreme or will Kentucky finally crack the Bulldogs code? Georgia is a big favorite, but Kentucky has played well in tight games this season.