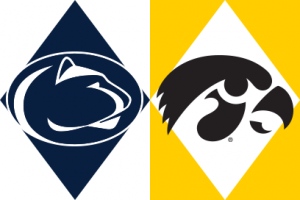 At one time, these two universities were the furthest geographically apart schools in the Big Ten. Now, it is becoming one of the best, and most surprising, rivalries in the conference.

Penn State is off to their third 5-0 start under head coach James Franklin, with wins over ranked opponents in Wisconsin and Auburn. Senior quarterback Sean Clifford has led a Penn State offense that is racking up 286 yards per game through the air. Senior receiver Jahan Dotson is a big reason for that passing game success as he is one of the most dynamic playmakers in college football. Defensively, the Nittany Lions are one of the best in the country. They are third in the nation allowing just 12 points per game, largely due to their ability to stop their opponents in the red zone. Penn State has held opponents without a score on 7-of-15 trips inside their 20-yard line, which ranks second in the nation.

Dating back to last season, Iowa has won 11 straight games and are up to No. 3 in both the AP and Coaches’ Polls. Junior quarterback Spencer Petras has been at the helm for all wins and thrown 15 touchdowns to just three interceptions during the streak. Junior running back Tyler Goodson is a threat on the ground and through the air, leading the team with 430 rushing yards and ranking second among Hawkeye’s receivers with 146 receiving yards. But the heart of the Iowa team is their defense, which leads the country with 12 interceptions and ranks second nationally, allowing 11.6 points per game.

When the Nittany Lions and Hawkeyes met under the lights in 2017, Penn State scored on the game’s final play to win, 21-19. This top-five matchup is setting up to be a similar defensive battle. 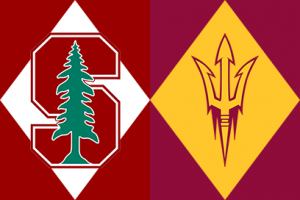 The Cardinal and Sun Devils look like they may be the strongest teams in their divisions, meaning this could be a Pac-12 title game preview.

Stanford (3-2) enters this matchup coming off the biggest upset of the season as the Cardinal beat Oregon, 31-24, in overtime, in week five. Sophomore quarterback Tanner McKee has led Stanford to a 3-1 record since taking over as a starter, including wins over two top-15 teams. McKee was named the Rose Bowl Game Pac-12 Player of the Week for his effort in the win over the Ducks. Defensively, the Cardinal are led by junior cornerback Kyu Blu Kelly, who leads the Pac-12 with nine passes defended. Kelly was named Pac-12 Defensive Player of the Week following their win over USC, when he held Trojan receiver Drake London to four catches and returned an interception for a touchdown.

Arizona State leads the Pac-12 South at 4-1 after beating UCLA in the Rose Bowl Stadium last week. Junior quarterback Jayden Daniels has been one of the most efficient passers in the country this season and the highest graded offensive player in the Pac-12 this season. He also leads a vaunted rushing attack that racks up more than 200 yards per game on the ground. The Sun Devil defense leads the Pac-12 in scoring defense, total defense, passing defense and sacks. The ASU “No Fly Zone” is allowing just 146 yards per game through the air and has the distinction of one of three teams to not allow a 40-plus yard play this season.

Under the lights in Tempe, the Sun Devils are double digit favorites, but the Cardinal haven’t shied away from being the underdogs as they have overcome those odds twice this season. 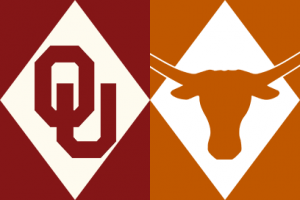 The Red River Rivalry is one of those games that rarely disappoints. Oklahoma and Texas are two teams and fan bases that truly do no like each other and it shows in the Cotton Bowl every year.

The Sooners enter the matchup 5-0, but four of the five wins are by one score or less. Oklahoma started the year inside the top-four in both polls, but the Sooners have slid back to No. 5/6. The OU offense ranks 15th nationally scoring 38.4 points per game, led by sophomore quarterback Spencer Rattler. Rattler leads the Big 12 in nearly every passing category, while the running back tandem of junior Kennedy Brooks and junior Eric Gray both average more than five yards per carry. The Oklahoma defense is improved in 2021 and feature the best rushing defense in the Big 12 through five weeks. The Sooner pass rush has gotten to opposing quarterbacks, recording three sacks per game.

No. 21/23 Texas (4-1) has won three straight games to climb back into the top-25. Sophomore running back Bijan Robinson has emerged as one of the most explosive offensive players in the country. Robinson is second in the nation with 663 rushing yards this year on just 105 carries and seven touchdowns on the ground. He’s added 10 catches for 167 yards and two more scores through the air. Senior linebacker DeMarvion Overshown averages 8.8 tackles a game to lead the Longhorn defense that has had their struggles, but has really muscled up when the opposing offenses get into the red zone. Texas ranks 82nd in total defense, but 30th in red zone defense.

Rivalry games are fun. Regardless of a team’s record, a game that means this much can make or break a season. Oklahoma has won three straight in this series, but seven of the last eight meetings between these two have been decided by seven points or less.