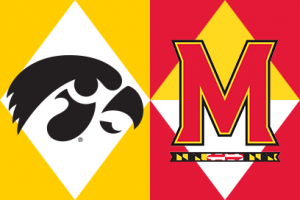 Under the “Friday Night Lights,” Iowa visits Maryland in a battle of undefeated Big Ten teams.

The Hawkeyes are ranked No. 5 in the AP Poll for the third straight week after they improved to 4-0 with a win over Colorado State in week four. Dating back to last season, Iowa has won 10 straight games and outscored opponents 33 to 13 during that stretch. Junior running back Tyler Goodson has scored 11 touchdowns in those 10 wins and ran for a career-high 153 yards and three touchdowns two weeks ago against Kent State. But the Hawkeyes real strength is their defense, led by reigning Rose Bowl Game Big Ten Player of the Week, junior linebacker Jack Campbell. Campbell tallied a career-high 18 tackles in the win over Colorado State. Iowa is ranked in the top-10 defensively in total defense, rushing defense, passing efficiency defense and scoring defense.

Maryland is one of the Cinderella 4-0 teams in college football to this point in the season. The Terrapins were picked to finish fifth in the Big Ten East but have come up with big wins over West Virginia in week one and at Illinois in week three. Junior quarterback Taulia Tagovailoa leads the conference in nearly every passing category, while senior receiver Dontay Demus Jr. leads the Big Ten in receiving yards. Defensively, Maryland has racked up 16 sacks through four games to lead the Big Ten, including four by senior defensive end Sam Okuayinonu. Senior corner back Jakorian Bennett has been one of the best defensive backs in the country with eight pass breakups and two interceptions this season.

The Hawkeyes, despite the high ranking, are just 3.5 point favorites over the Terps. With a short week of preparation, this could be the type of game decided by which team is able to capitalize on the opponent’s mistakes. 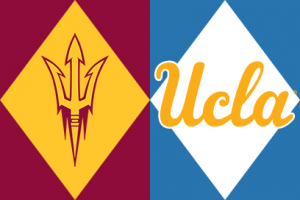 Under the lights at the Rose Bowl Stadium, UCLA hosts Arizona State in what could be a very important game in deciding the Pac-12 South.

The Bruins look like they may be back. Head Coach Chip Kelly has his UCLA squad ranked No. 20 in both major polls with a 3-1 mark to start the year. The Bruins are rolling on offense, averaging 38.5 points per game. Senior quarterback Dorian Thompson-Robinson leads the Pac-12 in passing efficiency, yards per completion and touchdown passes. On the ground, UCLA has out-rushed its opponent in 10 straight games, including a 775-to-256 edge in 2021. Senior defensive back Qwuantrezz Knight leads the Bruins defense that has held opponents to under 50 rushing yards in three of four games this season.

Arizona State has run roughshod over opponents this year to a 3-1 start to the season. The Sun Devils rank second in the conference with more than 211 rushing yards per game and have translated those rushing yards into points by scoring 15 touchdowns on the ground in four games. Senior running back Rachaad White, junior quarterback Jayden Daniels and freshman running back Daniel Ngata have all surpassed 200 rushing yards on the season. Daniels is also completing 73-percent of his passes for 202 yards per game through the air. On defense, Arizona State has stifled opposing passing attacks, surrendering just over 120 yards per game through the air.

UCLA is a slight favorite at home in a game that is basically a coin flip. The game hinges on Arizona State’s ability to run the ball against the Bruins, who have road blocked the rushing attack of every team they’ve played this year. 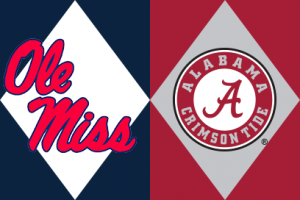 Can a mentee finally beat the mentor? We’ll find out when Lane Kiffin and the Ole Miss Rebels go to Tuscaloosa to take on Nick Saban and the Alabama Crimson Tide. Saban is 23-0 against former assistants who have become head coaches.

The No. 12 Rebels are 4-0 and have the most exciting offense in college football right now. Ole Miss averages 299 rushing yards and 340 passing yards per game. They’ve averaged 26 plays of 10 or more yards per game and converted on 12-of-14 fourth down attempts this season. Kiffin has turned junior quarterback Matt Corral into a Heisman Trophy candidate as Corral ranks in the top-eight nationally in passing yards, total offense, points responsible for, yards per attempt and passing efficiency. On defense, the Rebels will hope senior defensive end Sam Williams can keep up his hot start to the season. Williams leads the SEC in sacks per game and forced fumbles. Ole Miss would love if he can get to the quarterback, force turnovers and create more opportunities for their offense.

Alabama started the year No. 1 and have not budged from that spot with a 4-0 start. The Crimson Tide offense is firing on all cylinders in 2021, scoring more than 44 points in three of four games despite losing their starting quarterback, running back and top two receivers from a year ago. But Alabama has reloaded behind the play of freshman quarterback Bryce Young, who leads the SEC in passing efficiency and touchdown passes. The Tide defense has held their opponents to 14 points or less in three games this season and rank in the top five in the conference in both passing and rushing defense. Junior linebackers Christian Harris and Henry To’oTo’o lead the team in tackles, while six different Tide defenders have an interception this year.

Alabama enters this game as the favorite, but if this game is anything like the 2020 version, expect fireworks. Last year, Alabama beat Ole Miss, 63-48, in a game with an SEC-record 1,370 yards of offense.