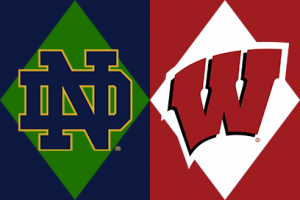 ESPN’s College GameDay and FOX’s Big Noon Kickoff will both be on hand as the Badgers and Irish meet in a battle for the Midwest at Soldier Field in Chicago.

Wisconsin is 1-1 to start the year. The Badgers lost their opener to Penn State, 16-10, but got back on track with a 34-7 win over Eastern Michigan in week two. Transfer running back Chez Mellusi has surpassed the 100-yard mark in both games as a Badger, but he doesn’t need to be the bell cow for Wisconsin as the Badgers have a stable of four running backs to rotate in throughout the game. The strength of this team, however, is its defense. The Badgers have the No. 2 overall defense and No. 1 run defense in the country. Senior linebacker Jack Sanborn was named to the Butkus Award watch list before the season and has lived up to the hype. Wisconsin also gets a boost on defense with the return of linebacker Leo Chenal, who missed the first two games due to COVID-19.

Notre Dame is a perfect 3-0 this season, but it hasn’t been smooth sailing. The Irish needed overtime to beat Florida State to open the season, then needed a last-minute touchdown to beat Toledo in week two. Last week, Notre Dame pulled away in the fourth quarter to beat Purdue, 27-13. The Irish are led by former Wisconsin quarterback Jack Coan, who transferred to Notre Dame after last season. Coan has thrown eight touchdowns and two interceptions this year. His favorite target has been sophomore tight end Michael Mayer, who leads the team in catches, receiving yards and receiving touchdowns. Defensively, junior safety Kyle Hamilton leads an Irish defense that has five interceptions already this season and averages more than four sacks a game.

This game could come down to one key area: efficiency in the red zone. The Badgers have struggled in the red area, while Notre Dame has scored on 100 percent of possessions inside the 20-yard line. 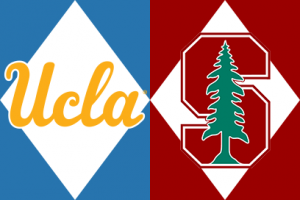 The Bruins and Cardinal play what could be considered a must-win game for both teams.

UCLA’s fourth quarter rally last week against Fresno State came up just short, but the Bruins are still ranked No. 24 in both major polls and 2-1 overall. Quarterback Dorian Thompson-Robinson, despite a low completion percentage, has been outstanding this season and ranks among the nation’s best in both yards per completion and passing efficiency. The Bruins have relied heavily on two playmakers this season as Michigan transfer running back Zach Charbonnet leads the team in rushing, averages more than 10 yards per carry and has scored six touchdowns, while Receiver Kyle Phillips leads the team in receptions, yards and receiving scores. On defense, UCLA leads the Pac-12 in rushing defense and sacks but has struggled defending the pass. The Bruins ranked 125th out of 130 in passing yards per game.

Stanford looked sluggish in their first game of the season, a 24-7 loss to Kansas State, but has rebounded with wins over USC and Vanderbilt. Quarterback Tanner McKee has been on a mission since taking over the reins of the offense. Over the last two games, his first two career starts, McKee has thrown four touchdown passes and no interceptions, and also ran for two more scores. The Cardinal have four reliable running backs. The quadruplets of Austin Jones, Nathaniel Peat, Casey Filkins and E.J. Smith ran for 195 yards and two touchdowns last week against Vanderbilt, with all four earning between four and seven carries. Defensively, the Cardinal have had to withstand injury issues in 2021, but cornerback Kyu Blu Kelly leads a secondary that has excelled against the pass. Kelly is tied for the team lead in tackles and leads the team in both passes defended and interceptions.

This is a matchup of strength on weakness. UCLA will look to pound the ball on the ground against Stanford’s porous run defense, while the Cardinal will look to air it out against the Bruins’ suspect pass defense. Whichever team can find more holes will win. 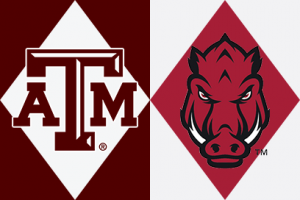 The Southwest Classic between Texas A&M and Arkansas has been dominated by the Aggies lately, but five of the last seven meetings have resulted in one score games.

The Aggies are off to a 3-0 start and are looking to move to 4-0 for the first time since 2016. Texas A&M looked outstanding in wins over Kent State (41-10) and New Mexico (34-0), but just squeaked past Colorado in week two with a 10-7 victory. Offensively, the Aggies feature one of the most dynamic running backs in all of college football. Junior Isaiah Spiller is likely to be the first running back picked in next spring’s NFL Draft. Through the air, tight end Jalen Wydermyer is one of the best pass-catching tight ends in school history as he is just one of four players to reach 1,000 career receiving yards and holds the school record for touchdown receptions with 12. The Texas A&M defense has been stifling opponents through the air. The Aggies are the only school in the country to allow under 100 passing yards per game.

The Razorbacks are one of the biggest surprises of the 2021 season. Arkansas is 3-0 and ranked No. 16 in the AP Poll, their highest ranking in any national poll in five years. The Razorbacks have found tremendous success running the football this fall and rank in the top-10 nationally in rushing offense. Arkansas has four players who have run for at least 100 yards this season, including quarterback KJ Jefferson, who is second on the team with 180 yards on the ground. While not as potent as the Texas A&M pass defense, the Razorbacks are strong against the pass. Arkansas ranks second in the SEC and 12th nationally in pass defense, led by safety Jalen Catalon, who has five interceptions in his last 13 games.

This will be the toughest test for both teams thus far. Arkansas has been outstanding at not turning the ball over and limiting sacks this season, but they have been undisciplined when it comes to penalties. Texas A&M, on the other hand, has beat themselves with penalties, but turnovers have been an issue. Whichever team can take advantage of that could come out on top.