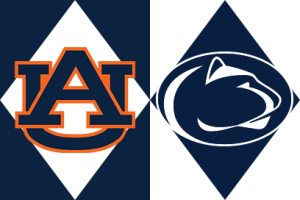 Auburn will get the full Happy Valley experience when they take on Penn State in a White Out, on Prime Time, with College GameDay on site.

The Tigers have been impressive to start the year, although it has been against lesser opponents. Auburn leads the nation in both points per game and are tied for first in points allowed after wins of 60-10 over Akron and 62-0 over Alabama State. Sophomore running back Tank Bigsby has run for more than 100 yards in both games and third-year starting quarterback Bo Nix is off to the best start of his career, completing nearly 75-percent of his passes for 383 yards, five touchdowns and no interceptions.

Penn State is off to a much better start than last year, when the Nittany Lions started 0-5. This year, PSU has climbed from No. 19 in the rankings to No. 10 after a 2-0 start, including a road win over Wisconsin to open the season. Offensively, Penn State’s strength is its stable of running backs. Juniors Noah Cain and Devyn Ford, along with sophomores Keyvone Lee and Caziah Holmes, allow the Nittany Lions to always have fresh legs in the backfield. On defense, Penn State is among the nation’s best in creating turnovers, with four interceptions and fumble recovery in their first two games.

Penn State is always tough to play at night and during a White Out in Happy Valley. And while this will be Auburn’s toughest game to date, the Tigers look to be up for the challenge. Penn State is favored, but both teams rely on hard-nosed defense, so this could be a defensive struggle. 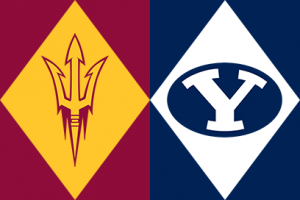 These two former Western Athletic Conference foes will meet for the first time since 1998.

Arizona State is off to a 2-0 start with wins over Southern Utah and UNLV. The Sun Devils have third-year starting quarterback Jayden Daniels back this fall, but ASU has gone ground heavy in 2021. Arizona State is averaging more than 250 yards per game on the ground and scoring 39 points per game. Four different Sun Devils have scored a touchdown this year and five different players have run for at least 40 yards. Defensively, ASU has excelled at stopping the pass through two games. They’ve held opponents to just over 50-percent passing, have three interceptions and are allowing 106.5 yards per game.

BYU opened the season with two wins over Pac-12 teams, with their eyes set on a third win over ASU. The Cougars beat Arizona, 24-16, in week one, then earned a major rivalry win over Utah, 26-17, in week two. BYU hasn’t put up amazing stats in their wins, but they certainly haven’t beat themselves. The Cougars, who are turnover free in 2021, have scored in every quarter this season and have scored on all seven trips into the red zone. On the other side of the ball, BYU has held opponents to just 50-percent scoring in their defensive red zone.

The Cougars have won 11 straight home games dating back to 2019, but the Sun Devils are a slight favorite on the road. In a battle of strong rushing attacks, the team that can find more room on the ground will likely come out victorious. 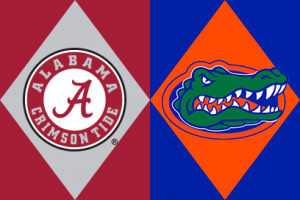 Florida hosts Alabama in Gainesville for the National Game of the Week. These two teams played one of the top games of 2020 in the SEC Championship last December, when Alabama won, 52-46.

The Crimson Tide are once again one of the best teams in the country and favorites to finish in the top-four. Alabama opened the season with a commanding 44-13 win over Miami and followed it up with a win over Mercer, 48-14. Quarterback Bryce Young became the first player in Alabama history to have seven passing touchdowns in his first two starts. Senior running back Brian Robinson Jr. gives the Tide an experienced back to pair with Young, along with a veteran receiving corps led by juniors John Metchie Jr., Jameson Williams and Slade Bolden. Defensively, Alabama was forced to replace a lot of starters, but linebackers Christian Harris and Will Anderson Jr. lead a talented group.

Florida is off to a 2-0 start after beating in-state opponents Florida Atlantic, 35-14, and South Florida, 42-20. After being the best passing offense in the country in 2020, the Gators have flipped the script and are now the top rushing attack in the FBS after two weeks. Both junior quarterback Emory Jones and freshman QB Anthony Richardson have proven they can throw and run the ball. Richardson leads the team in rushing with 275 yards, while Jones is second with 164 yards on the ground. Zachary Carter leads a talented front seven for Florida, which has racked up seven sacks in the first two games. Carter accounts for half of those sacks and ranks second nationally with 3.5.

Alabama is a big favorite in the game but the Tide’s defense has not played up to Coach Saban’s high standards of late. Florida will challenge the Alabama defense with its dynamic rushing attack, which will also run some clock and keep the explosive Crimson Tide offense on the sideline.