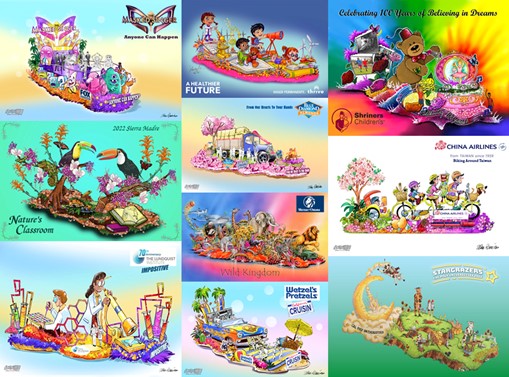 PASADENA, Calif. (December 2, 2021) – As the Pasadena Tournament of Roses® and our nationwide community of partners enter the final stretch leading up to the 2022 Rose Parade® presented by Honda, the fourth in a series of sneak previews of floral float entries reveal the colorful and creative spectacle that awaits streetside and worldwide broadcast audiences on Saturday, January 1, 2022.

This year’s float entries will continue the tradition of colorful florals, dramatic storytelling, inspired designs, and spirited riders and outwalkers that have been Rose Parade hallmarks for more than 130 years. The theme of the 133rd Rose Parade — “Dream. Believe. Achieve.” — is reflected in float designs from longtime mainstays Cal Poly Universities, China Airlines, Kaiser Permanente, Shriners Children’s and Sierra Madre Rose Float Association; returning entrants Blue Diamond Growers and RFD-TV, in partnership with Mutual of Omaha’s Wild Kingdom; and newcomers The Lundquist Institute for Biomedical Innovation at Harbor UCLA, The Masked Singer and Wetzel’s Pretzels. Their design concepts range from whimsical and fantastic to heartfelt and realistic, reflecting the range of spectacular, supersized storytelling canvases that have been embraced for generations. 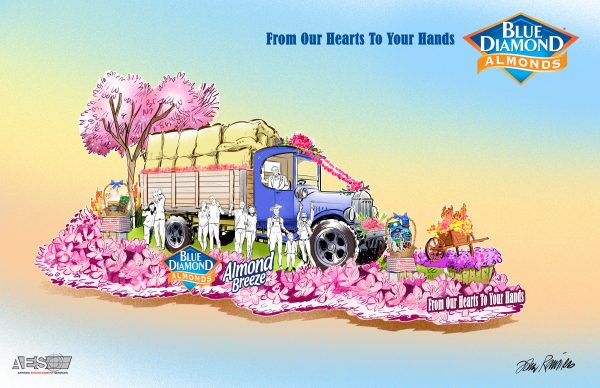 Blue Diamond Growers’ fourth float entry features a vintage farm truck “From Our Hearts to Your Hands.” Parked under a tree and loaded with dozens of bags of freshly harvested almonds, the blue truck is flanked by two baskets of Almondmilk and Snack Almonds from Blue Diamond Growers. The float’s deck is ringed by oversized flowers in shades of purple. From orchard to can and carton, Blue Diamond almonds are touched by the families of growers who tend to acres of vibrant almond trees. The growers featured on the float were selected for their efforts to grow almonds sustainably. (Artistic Entertainment Services) 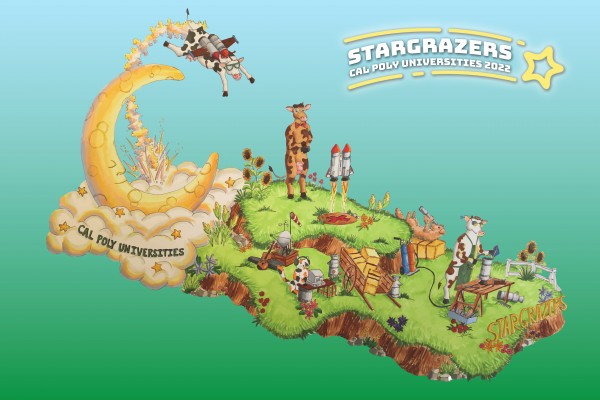 Inspired by the nursery rhyme “Hey Diddle Diddle,” Cal Poly Universities’ “Stargrazers” follows the story of the cows’ journey to achieve their dream of jumping over the moon, but with a twist: they use jetpacks. Other characters from the wondrous tale of cattle dreaming big and achieving the impossible join in to help (cat with a computer, dog with a telescope) or cause mischief (dish and spoon stealing a milk canister). The scene represents the student-run Cal Poly Rose Float program of Cal Poly Universities’ ingenuity and “learn by doing” approach. The Cal Poly Universities are a part of The California State University. (Self-built) 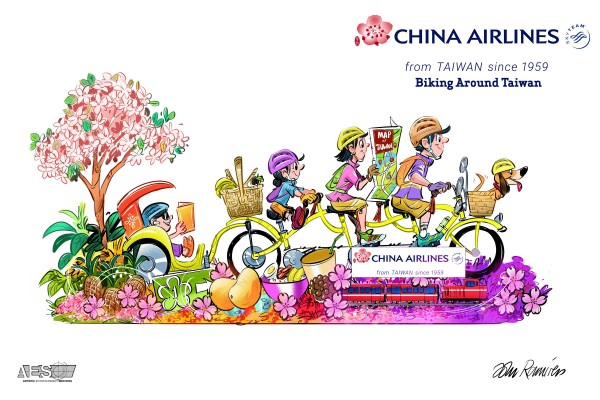 A family of cycling enthusiasts enjoys a day “Biking Around Taiwan” to introduce us to the sites, smells and beauty of the island that China Airlines calls home: Taiwan. A bicycle built for three with a pup on board and a trailer in tow glides through the gorgeous scenery of Tung blossoms –  often referred as “April Snow” or “May Snow” – while Taiwan’s signature delicacies  –  pineapples, mangoes, bananas, braised pork rice, and world-famous Boba milk tea – provide sustenance as the family dreams of a cycling tour around the island that boasts a most varied and enjoyable itinerary. (Artistic Entertainment Services) 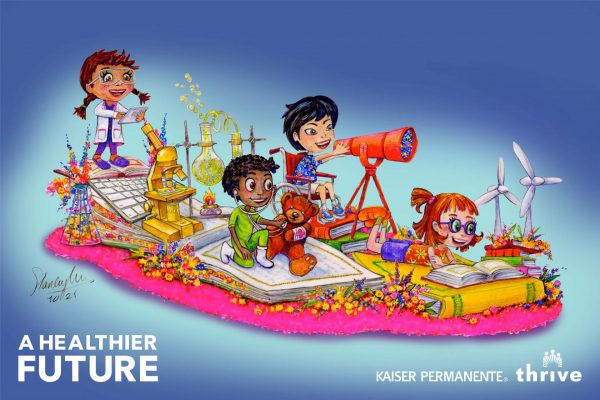 Kaiser Permanente’s 16th Rose Parade float, “A Healthier Future,” celebrates the dedication and talents of our health care heroes and the possibilities when passionate people come together to use their expertise for the greater good. The entry features four children exploring, imagining, and daring to dream about one day making a difference in the world. These children represent doctors, nurses, scientists, researchers, innovators — past, present, and future — and all the other courageous and diverse individuals who are creating a healthier future for all. (Fiesta Parade Floats)

The Lundquist Institute for Biomedical Innovation at Harbor UCLA 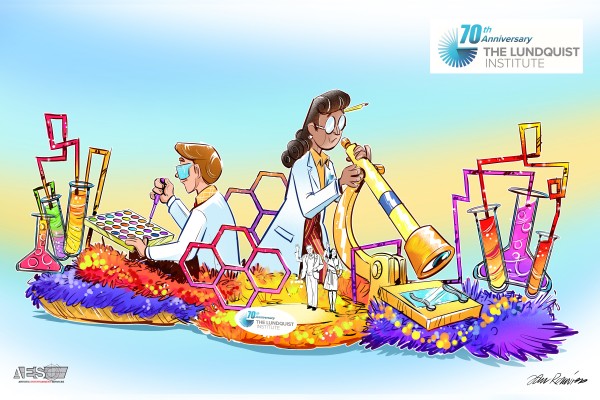 The inaugural float entry from The Lundquist Institute celebrates its 70th anniversary as an engine of innovation and “research with reach.” Themed “Impositive,” the float dramatizes their 120 principal investigators’ and 400 researchers’ rigorous and optimistic approach to new discoveries including male contraceptive methods and ongoing COVID-19 clinical trials. Their legacy includes sickle cell treatments for children, a standard test for high cholesterol, a training model for paramedics, and the first training programs for nurse practitioners. The Lundquist Institute serves as a hub for the Los Angeles region’s burgeoning biotech scene with its new 15-acre business tech park on their campus at Harbor-UCLA Medical Center. (Artistic Entertainment Services) 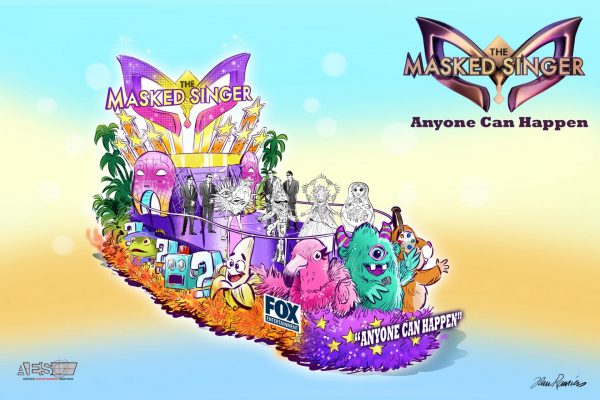 Fox Entertainment rings in the New Year with a colorful entry featuring the top-rated entertainment show on television, The Masked Singer. Larger than life recreations of Emmy Award-winning designer Marina Toybina’s iconic costumes are led by Monster, who is flanked by Flamingo and Hamster. The platform also features the show’s infamous, mysterious and occasionally dancing “Men In Black,” who are seen guarding actual costumes on the show. The float’s theme, “Anyone Can Happen,” echoes the show’s motto, inviting viewers worldwide to dream big, as they look ahead to Season Seven of The Masked Singer, coming this Spring on FOX. (Artistic Entertainment Services) 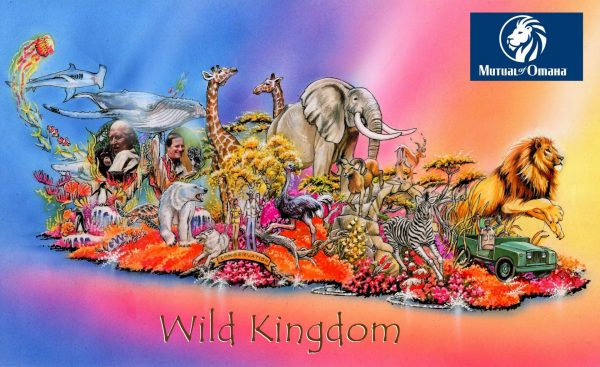 The legacy of Mutual of Omaha’s Wild Kingdom, the most loved and respected wildlife program in television history, continues with a 55-foot entry in partnership with RFD-TV. The King of the Jungle leaps over a safari jeep trailed by a menagerie of African wildlife, including a zebra, and twin giraffes. A wolf, polar bear and penguins appear from the Arctic and Antarctic, while a whale and sharks emerge from the ocean. The show itself is represented by current host Peter Gros, photorealistic floragraphs of legendary predecessors, Marlin Perkins and Jim Fowler, and the original music from the classic program. (Phoenix Decorating Co.) 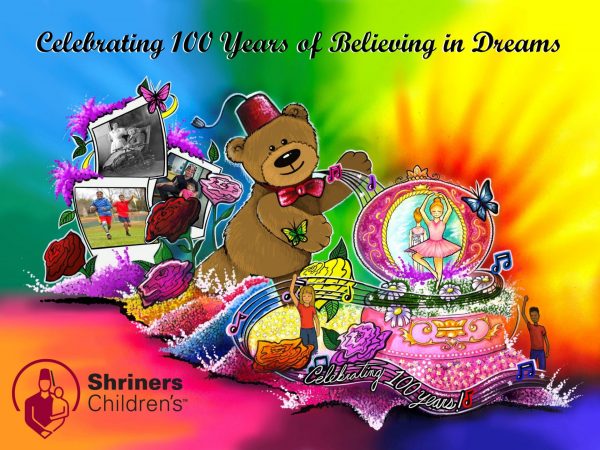 Shriners Children’s celebrates a century of providing quality care to children with complex medical conditions, regardless of the ability to pay or insurance status. The theme, “Celebrating 100 Years of Believing in Dreams,” recognizes both the power of hopes and dreams, and celebrates patients’ resilience and determination as they gain the confidence to achieve their goals. As honorary float riders, national patient ambassadors Sydney, Seth, Mia and Connor represent the countless stories of hope and healing made possible by Shriners Children’s throughout its history. (Phoenix Decorating Co.) 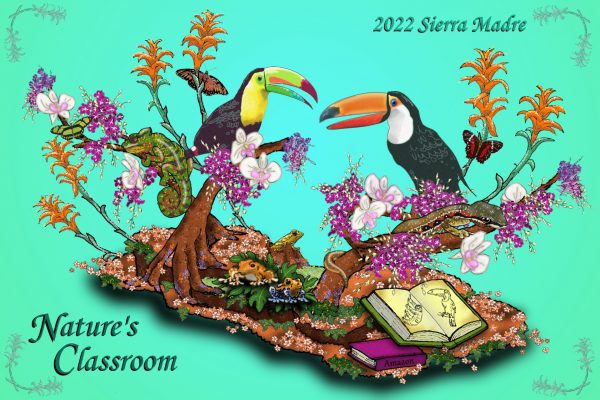 The 90th volunteer-built float entry from the Sierra Madre Rose Float Association highlights the need to conserve and protect the endangered rainforest. A textbook and student’s journal invites discovery throughout the beautifully composed presentation of animal, insect, and plant life. Toco and keel-billed toucans atop kapok trees tower over endangered frogs, lizards, and butterflies. Both toucans’ heads turn independently through a joystick, allowing the operator to respond to the crowd reactions. Over the last 15 years, float entries from Pasadena’s neighbor to the east have won a remarkable 14 float awards in 10 categories. (Self-built) 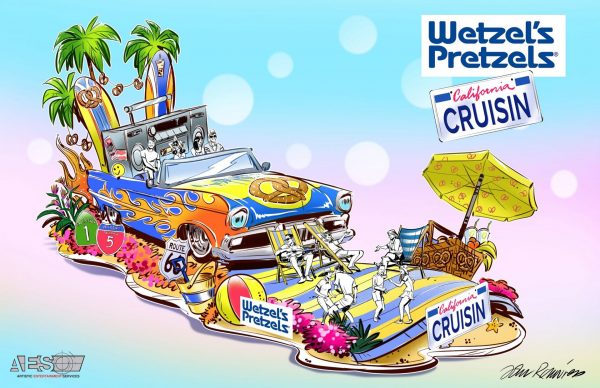 “California Cruisin” shares the fun, lighthearted spirit of Pasadena-born brand Wetzel’s Pretzels, and the cool, SoCal vibes that inspire its fresh take on soft pretzels. For their inaugural Rose Parade float entry, Wetzel’s Pretzels combines a classic California road trip and beach party, featuring a custom-painted convertible that’s cruisin’ to the upbeat tunes pulsing from a boom box, with surfboards in tow. Palm trees, “gram-worthy” snacks, and iconic road signs—Route 66 and Pacific Coast Highway’s Route 1 among them—round out the scene, which rolls down Colorado Boulevard steps from Wetzel’s headquarters. Viewers are invited to count the number of pretzels on board. (Artistic Entertainment Services)