Five players who have played in a Rose Bowl Game were named among the 176 semifinalists for the 2021 William V. Campbell Trophy. 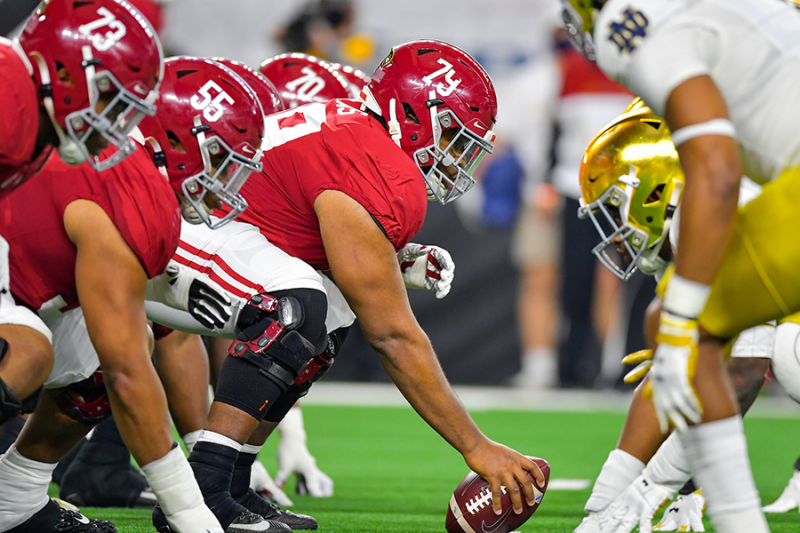 This year marks the 32nd year for the Campbell Trophy, known as the Academic Heisman, which recognizes an individual as the best football student-athlete in the national for their combined academic success, football performance and exemplary leadership.

Ruckert was a freshman on the Ohio State football team when the Buckeyes defeated Washington in the 2019 Rose Bowl Game. He appeared in the game but did not record any stats.

As a sophomore, Porter handled the holding duties for Washington in the 2019 Rose Bowl Game and punted once in the game.

In his junior season, Mathis made one tackle in the 2020 Rose Bowl Game against Wisconsin, a game the Ducks would win, 28-27.

Henningsen appeared in the Rose Bowl Game as a sophomore in 2020 against Oregon, but did not record any stats in the game.

Owens (pictured above) started at center for Alabama in the 2021 CFP Semifinal at the Rose Bowl Game. The Crimson Tide defeated Notre Dame, 31-14, on their way to a National Championship victory.

The award is given out by the National Football Foundation and the College Football Hall of Fame. Of the 176 semifinalists, 12-14 will be selected as NFF National Scholar-Athletes and receive $18,000 in postgraduate scholarship. The finalists will attend the 63rd NFF Annual Awards Dinner in Las Vegas on December 7, where the winner of the Campbell Trophy will be selected and will have their scholarship increased to $25,000.

The student-athletes are nominated by their schools and each school is limited to one nominee, who must be a senior or graduate student in their final year of eligibility, must have a GPA of at least 3.2 on a 4.0 scale, have outstanding football ability and have demonstrated strong leadership and citizenship.

Three previous winners of the Campbell Trophy have played in the Rose Bowl Game:

The award is named after Bill Campbell, an All-Ivy League player and captain of Columbia’s 1961 Ivy League championship team.

To see the full release from the NFF, click here.