Eddie Casey, Cornelius Greene, Matt Leinart and Jacque Robinson to be Inducted into the Rose Bowl Hall of Fame Class of 2019 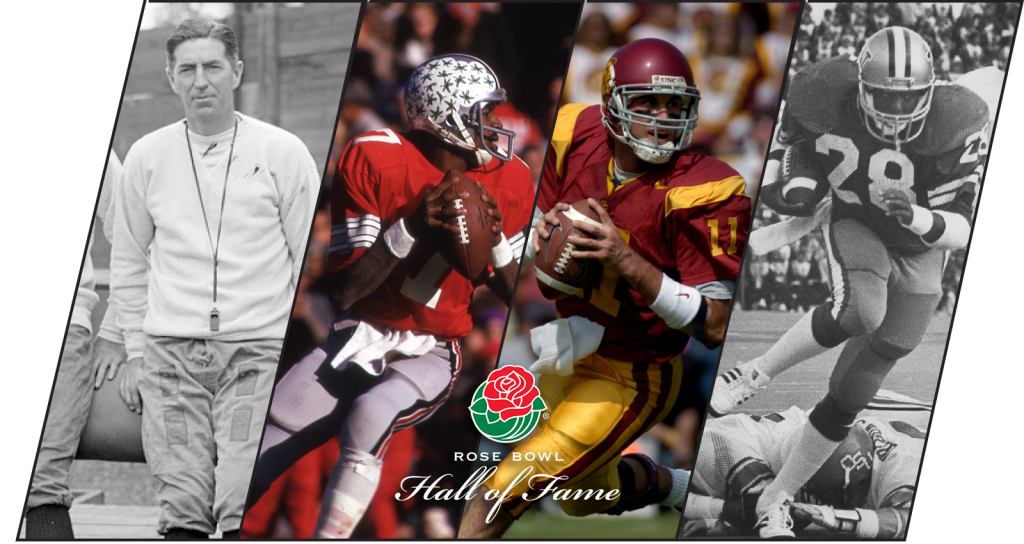 Eddie Casey may have been small in stature but played football larger than life. The 155-pound halfback and defensive back had remarkable quickness and agility that made him an outstanding player on both offense and defense. Casey started as a freshman in 1916, then served in the Navy during World War I. After returning to Harvard in 1919, Casey led the Crimson to an undefeated 9-0-1 record, including a 7-6 victory over Oregon in 1920 Rose Bowl Game. The victory introduced the Tournament of Roses to the New England states. Against the Ducks, Casey accounted for more than half of Harvard’s 205 total yards with 49 yards rushing and 59 yards receiving. For his efforts, Casey was named MVP of the game. Casey coached the Harvard freshman team from 1926-28, then was an assistant on the varsity team in 1929-30, before finally became the head coach from 1931-1934. He was inducted into the College Football Hall of Fame in 1968.

Cornelius Greene is in a small fraternity of football players who played in four Rose Bowl Games. Greene played for Ohio State in the 1973 Rose Bowl Game, then started in the 1974, 1975 and 1976 games. In the 1974 game, Greene was named MVP in a 42-21 victory over USC. The sophomore quarterback threw for 129 yards and ran for 45 yards and a touchdown. Buckeyes legendary head coach Woody Hayes described the 1974 Rose Bowl Game as “the best game we’ve ever, EVER played.” Greene’s third quarter touchdown run broke a 21-21 tie and gave the Buckeyes a lead they would not relinquish. Greene accumulated 454 yards of offense and scored two touchdowns in the 1975 and 1976 games. The 1975 Chicago Tribune Silver Football award winner as the Big Ten’s best player, Greene was 31-3-1 as a starter and was an eleventh-round draft pick of the Dallas Cowboys in the 1976 NFL Draft.

Matt Leinart was one of the most celebrated quarterbacks of the last 20 years of college football. The USC signal caller led the Trojans to a pair of Rose Bowl Games, including a 28-14 victory over Michigan in the 2004 Granddaddy of Them All. In the win, Leinart won MVP by throwing three touchdowns and running for another. In his second Rose Bowl Game, Leinart completed 73-percent of his passes and threw a touchdown pass, but the Trojans lost to Texas in the 2006 BCS National Championship, 41-38. Leinart finished his college career with a 37-2 record in games he started and won the Heisman Trophy in 2004. The two-time All-American was selected 10th overall in the 2006 NFL Draft and played six seasons in the NFL. Leinart had his USC jersey retired and was inducted into the USC Athletic Hall of Fame in 2007, followed by an induction into the College Football Hall of Fame in 2017.

Jacque Robinson was the spark that led the University of Washington to a 28-0 victory over Iowa in the 1982 Rose Bowl Game. Robinson became the first freshman to be named MVP in the Rose Bowl Game after he racked up 142 yards rushing on 20 carries and scored a pair of touchdowns. The Husky running back started the scoring with a one-yard touchdown run in the second quarter. He then broke the game open in the fourth quarter with a 34-yard touchdown scamper that gave Washington a 21-0 lead. Robinson went on to win Orange Bowl MVP honors in 1985, one of just four players to win MVP in both the Orange Bowl and Rose Bowl Game. Robinson was selected in the eighth round of the 1985 NFL Draft by the Philadelphia Eagles. He was inducted into the Husky Hall of Fame in 2016, as part of the 1984 Washington football team.