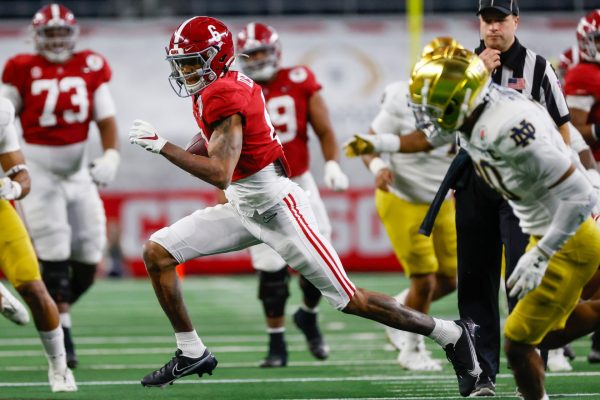 Smith, who just days later became the first wide receiver in 30 years to win the Heisman Trophy, led Alabama with seven catches for 130 yards and three receiving touchdowns in the game. He tallied Alabama’s first score of the game on a screen pass and weaved his way through defenders for a 26-yard score. Smith added his second score in the second quarter on a 34-yard catch-and-run over the middle and finished with a flip over a defender into the end zone. The dynamic wideout scored the Crimson Tide’s final touchdown late in the third quarter with a tip-toe reception at the front corner of the end zone which gave Alabama a 28-7 lead.

Smith led the nation in 2021 with 23 receiving touchdowns and 1,856 receiving yards. He was named Offensive Most Valuable Player at the National Championship after catching 12 passes, a CFP title game record, for 215 yards and three touchdowns, in the first half alone. Smith injured his hand in the third quarter and did not return, but his record-breaking performance in just one half was enough to earn the MVP honors. 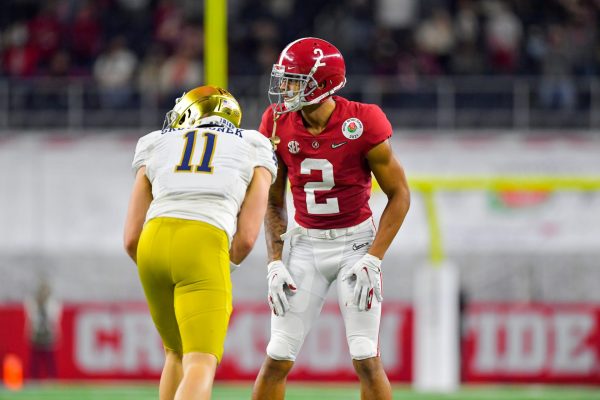 Surtain II was a key cog in the Alabama defensive machine that shut down the Irish offense. The SEC Defensive Player of the Year tallied five tackles, including a tackle for loss, and a pass break up. Throughout the lead up to the game, Notre Dame Head Coach Brian Kelly regularly mentioned Surtain as the best cornerback in the country and said the Irish would not try to throw in his direction.

In one of the few passes thrown his way, Surtain nearly intercepted the throw along the sideline, but the ball was thrown just a bit too far out of bounds and Surtain could not get his feet down inbounds.