Throughout the 2019 football season, the sports world will be celebrating the 150th anniversary of college football. The Tournament of Roses and Rose Bowl Game will be joining in on the celebration by bringing you the stories of how the Rose Bowl Game has helped shape college football over the last century and a half. This is the sixth of those stories, “The Tri-Party Agreement.” 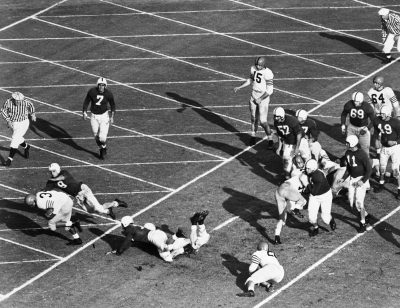 From 1902 until 1946, the Rose Bowl Game featured the champion of the Pacific Coast Conference and the best team from the East.

Initially, the Tournament of Roses Association invited teams to compete on the gridiron. Beginning in 1924, the Tournament invited only the Western team, which in turn selected its Eastern opponent. By 1935, the Pacific Coast Conference (which later became the Association of Western Universities, Pacific-8, Pacific-10 and Pac-12) began choosing one of its own teams to compete in the Rose Bowl Game on New Year’s Day, while also still selecting the opposition.

But everything changed prior to the 1946 season when the Big Ten (then known as the Big Nine) and Pacific Coast Conference reached a groundbreaking agreement with the Tournament of Roses to exclusively send their conference champions to the Rose Bowl Game each year. It was the first agreement of its kind and began the tradition of the Pac-12 against the Big Ten in the Granddaddy of Them All. No other bowl game would have two conference affiliations until 1999.

On January 1, 1947, UCLA met Illinois in the first Rose Bowl Game since the inception of the agreement. Illinois, led by running backs Claude Young and Julius Rykovich, defeated UCLA, 45-14.

In 2014, the Big Ten and Pac-12 announced a 12-year extension of the agreement through 2026, coinciding with the transition from the BCS to the College Football Playoff (CFP). Although the Rose Bowl Game serves as a semifinal for the CFP once every three years, the Tri-Party Agreement between the Big Ten, Pac-12 and Tournament continues as the oldest bowl game agreement in college football history.