Throughout the 2019 football season, the sports world will be celebrating the 150th anniversary of college football. The Tournament of Roses and Rose Bowl Game will be joining in on the celebration by bringing you the stories of how the Rose Bowl Game has helped shape college football over the last century and a half. This is the tenth of those stories, “The Greatest Game of All-Time.” The final call for the preeminent voice of college football.

The 2006 Rose Bowl Game had it all and served as the BCS National Championship for the 2005 college football season. No. 1 USC entered the game with a perfect 12-0 record for the year and was on a 34-game winning streak. No. 2 Texas was also undefeated at 12-0, won the 2005 Rose Bowl Game, and had won 19 straight games.

One month prior to the game, at the Heisman Trophy Ceremony, Trojan running back Reggie Bush was named the winner of the college football’s most prestigious individual award. Texas quarterback Vince Young finished second, while USC quarterback Matt Leinart finished third.

With Keith Jackson doing the play-by-play for the final time in his illustrious career, the stage was set for an exciting game and boy did it deliver.

Texas took a 16-10 lead into the halftime break. The Trojans and Longhorns then went back and forth with three consecutive lead-changing scores in the third quarter to set up an epic final 15 minutes.

Bush scored on an iconic flip into the endzone early in the fourth quarter to give USC a 31-23 lead. Texas responded with a 34-yard field goal, only to have the Trojans march down the field and score on a pass from Leinart to wide receiver Dwayne Jarrett to put USC up 12, 38-26, with 6:42 left in the game. 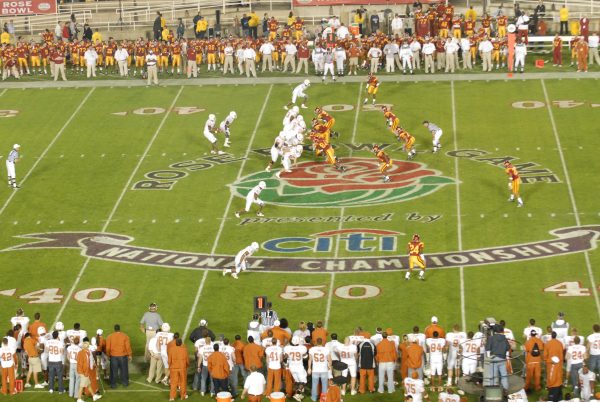 The Texas quarterback led the Longhorns on an 8 play, 69-yard touchdown drive in 2 minutes, 39 seconds to cut the Trojan lead to five, 38-33.

On the ensuing Trojan drive, USC moved the ball past midfield, but faced a fourth-and-two from the Texas 45-yard line with 2:13 remaining in the game. USC coach Pete Carroll elected to go for it and running back LenDale White was stopped one-yard short of the first down.

Texas took over and Young was once again masterful. The Heisman runner-up adeptly moved the Longhorns down the field, but ultimately faced fourth-and-five from the eight-yard line. In one of the most memorable plays in recent college football history, Young dropped back to pass, then scampered to the right and, as Keith Jackson described it, “He’s going for the corner… he’s got it!” The score gave Texas a 39-38 lead with 19 seconds left. After a successful two-point conversion, the Longhorns led by three, 41-38.

USC had one final opportunity with the ball and completed a 26-yard pass to move into Texas territory, but the clock ran out on an incompletion on the next play.

Even years later, the game has been declared the greatest game or greatest bowl game by Sports Illustrated, ESPN, Bleacher Report, Athlon Sports and many more.