Throughout the 2019 football season, the sports world will be celebrating the 150th anniversary of college football. The Tournament of Roses and Rose Bowl Game will be joining in on the celebration by bringing you the stories of how the Rose Bowl Game has helped shape college football over the last century and a half. This is the ninth of those stories, “The First True National Championship Game.” 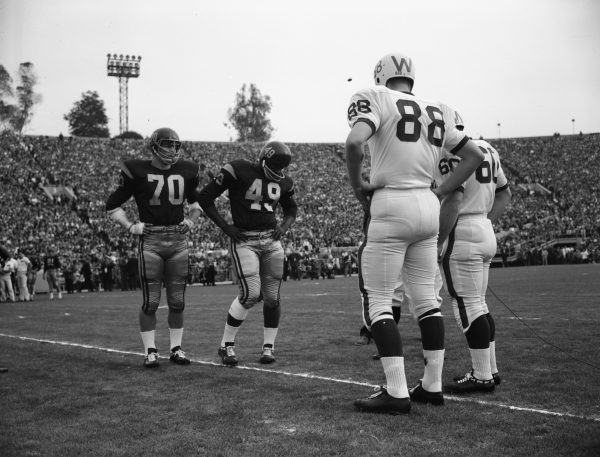 The 1963 Rose Bowl Game pit No. 1 USC against No. 2 Wisconsin. This marked the first time in the history of bowl games that there was a matchup of No. 1 vs No. 2 and it would not disappoint. The 49th Rose Bowl Game went down in history as one of the greatest bowl games of all-time.

Wisconsin was 8-1 after the 1962 regular season, with wins over No. 1 Northwestern and No. 5 Minnesota. Quarterback Ron Vander Kelen was named Big Ten Conference MVP and end Pat Richter, a unanimous consensus All-American, led the Badgers to a 14-9 win over the Gophers to win Paul Bunyan’s Axe and earn a trip to the Rose Bowl Game.

When the teams met in Pasadena on January 1, 1963, USC took control early. The Trojans led 21-7 at halftime and the score was 42-14 early in the fourth quarter. Beathard threw four touchdown passes, including two to Bedsole, to jump out to the lead.

Vander Kelen and the Badgers scored 23 points in the final 14 minutes of the game. Wisconsin appeared poised to win the game when the Badgers forced USC to punt with a little over a minute remaining, but the punt returner fumbled and USC ran the clock out to win, 42-37.

The game remained the highest-scoring Rose Bowl Game until 1991. Its 79 points was one of 11  standards etched in the Rose Bowl Game’s record book. The two teams combined for 11 touchdowns and a safety, 853 total yards (with Wisconsin amassing 486 of those) and 47 first downs.

“We must have played one of our better games,” USC coach John McKay said. “We scored 42 points against the nation’s No. 2 team, didn’t we?”