Throughout the 2019 football season, the sports world will be celebrating the 150th anniversary of college football. The Tournament of Roses and Rose Bowl Game will be joining in on the celebration by bringing you the stories of how the Rose Bowl Game has helped shape college football over the last century and a half. This is the seventh of those stories, “Post Bowl National Champion Voting.” 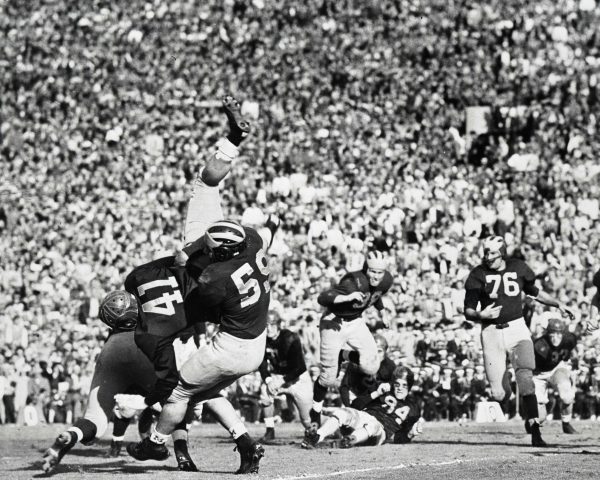 Throughout the 1947 college football season, three teams battled for the title of National Champion. Notre Dame, Michigan and Penn State all finished the season with undefeated and untied records.

At that time in college football, National Champions were awarded following the conclusion of the regular season. In the final Associated Press (AP) Poll, taken in early December, Notre Dame was crowned the National Champion. Penn State went on to play in the Cotton Bowl, while Michigan would play USC in the Rose Bowl Game. Notre Dame didn’t participate in postseason games at that time because they interfered with final exams.

Penn State tied SMU, 13-13, in the Cotton Bowl Classic. Michigan defeated USC, 49-0, in the Granddaddy of Them All, leaving Michigan and Notre Dame as the only unbeaten teams in college football.

Many sportswriters who witnessed the Rose Bowl Game declared Michigan to be the best team they had seen all year. After the game, nearly every other poll (11 of the 14 that named National Champions) opted to rank the Wolverines ahead of the Irish, but the AP held to the poll prior to the postseason.

Detroit Free Press sports editor Lyall Smith recognized that despite not playing one another, Michigan and Notre Dame had three common opponents: Pittsburgh, Northwestern and USC. Notre Dame defeated the three teams by a margin of 104-32, while Michigan beat the trio 167-21.

In response to the public outcry, the AP decided it would hold a special post-bowl AP poll on January 6, 1948. It marked the first time in college football history that the AP would put out a poll following postseason play. With 357 sports writers polled, Michigan won the vote, 226-119, with 12 writers calling the vote a draw. The AP called the special vote, “an opportunity to settle one of the great sports debates,” but it did not supersede the original final poll and Notre Dame was named AP National Champion.

The post-bowl vote sparked an even stronger debate about when National Champions should be crowned. Five time over the next 16 seasons, the National Champion lost in their bowl game, including the 1960 Rose Bowl Game, when No. 6 Washington defeated No. 1 Minnesota, 17-7.

In 1965, the AP held its first official post-bowl vote and it could not have come at a better time. No. 4 Alabama was crowned the National Champion after defeating No. 3 Nebraska in the Orange Bowl, while No. 1 Michigan State lost to UCLA in the Rose Bowl Game, and No. 2 Arkansas lost to No. 14 LSU in the Cotton Bowl.

The AP went away from post-bowl voting for the next two years, but returned in 1968 which has been standard practice since.