Throughout the 2019 football season, the sports world will be celebrating the 150th anniversary of college football. The Tournament of Roses and Rose Bowl Game will be joining in on the celebration by bringing you the stories of how the Rose Bowl Game has helped shape college football over the last century and a half. This is the third of those stories, “Knute Rockne vs. Pop Warner.”

There are few moments in sports when two truly legendary coaches lead their teams onto the field, but the 1925 Rose Bowl Game was one of those rare instances.

Notre Dame met Stanford in the 11th edition of The Granddaddy of Them All. The Irish were led by future Hall of Fame coach Knute Rockne, while renowned coach Glenn “Pop” Warner was directing Stanford.

Prior to the game, Notre Dame had never played west of Kansas, but Rockne and the Notre Dame administration were swayed to travel to California by Irish alumni that lived on the West Coast. After Notre Dame realized how lucrative a trip to LA could be, the Irish started their rivalry with USC, which has been called the greatest intersectional rivalry in college football. 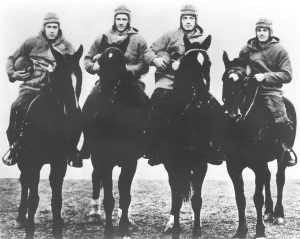 Layden was the hero of the 1925 Rose Bowl Game as he scored three touchdowns, including 70- and 78-yard interception returns for scores, in the 27-10 win for the Irish. But Layden shared his Player of the Game honors with Stanford’s Ernie Nevers, who out rushed The Four Horsemen single-handedly with 114 yards on the day and scored Stanford’s lone touchdown. Both men were later enshrined in the Rose Bowl Hall of Fame.

Pop Warner’s squad was done in by eight turnovers, which led to three Notre Dame touchdowns and was ultimately the difference in the game. Warner, who had popularized the single-wing attack, introduced, for the first time in front of a national audience, the double-wingback formation. Stanford controlled parts of the game and actually won the total-yards battle, 298–179, as well as had 17 first downs to Notre Dame’s seven.