Throughout the 2019 football season, the sports world will be celebrating the 150th anniversary of college football. The Tournament of Roses and Rose Bowl Game will be joining in on the celebration by bringing you the stories of how the Rose Bowl Game has helped shape college football over the last century and a half. This is the eighth of those stories, “Eclipsing 100,000 Fans.” 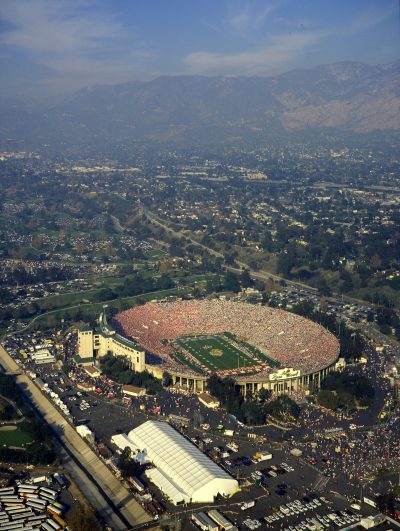 When the Tournament of Roses held the first East-West Tournament Football Game, which later became the Rose Bowl Game, the field at Tournament Park had temporary bleachers with enough room for 1,000 fans. More than 8,500 spectators arrived to watch Michigan defeated Stanford. Over the next 50 years, the crowd would expand to more than 100,000 annually.

When the building of the Rose Bowl Stadium was completed in the fall of 1922, the horseshoe stadium had a capacity of 57,000. Six years later, the Tournament of Roses decided to close the south end of the stadium and complete the bowl, adding 19,000 seats and upping the overall capacity to 76,000 seats.

Due to renovations in the 1990’s for World Cup soccer matches and improved seating bowl access, the stadium capacity was reduced under 100,000.