Anthony Davis, Jim Delany and Ron Simpkins to be Inducted into the Rose Bowl Hall of Fame Class of 2021

Tickets are now available for the induction Ceremony that will take place in Pasadena on December 30, 2021 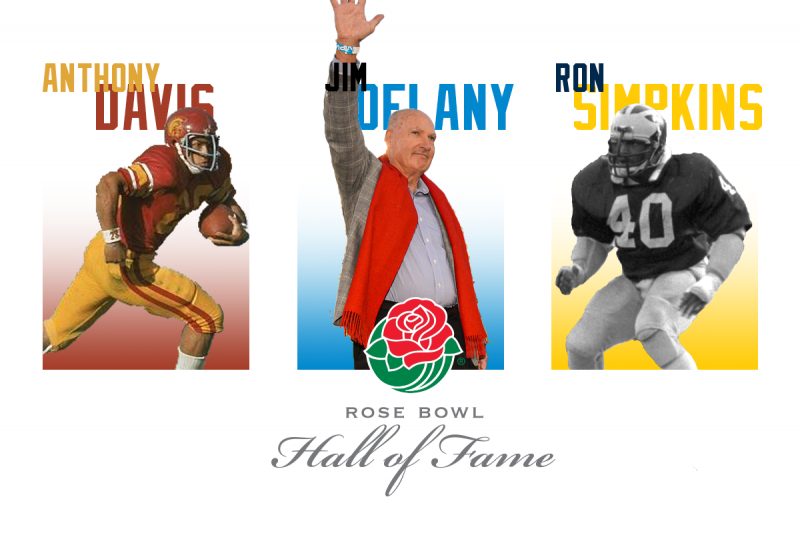 PASADENA, Calif. (October 26, 2021) – The Tournament of Roses announced today that former USC running back and College Football Hall of Fame inductee Anthony Davis, former Big Ten Commissioner Jim Delany, and three-time Rose Bowl Game participant and 1979 All-American Ron Simpkins of Michigan will be inducted into the Rose Bowl Hall of Fame as the Class of 2021.

The Rose Bowl Hall of Fame Induction Ceremony will take place at the Lot K Tent on December 30, 2021, outside of the Rose Bowl Stadium, two days prior to the kickoff of the 108th Rose Bowl Game. Tickets to the event, which is a seated luncheon featuring a Q&A session with the inductees, are available for $60 and can be purchased online.

The Rose Bowl Hall of Fame was established in 1989 to pay tribute to members of the Rose Bowl Game who have contributed to the history and excitement of the game, and those who embody the highest level of passion, strength, tradition, and honor associated with The Granddaddy of Them All®.

Anthony Davis is one of the many great running backs to have played at USC, but few can match his output and his wins. The Davis-led Trojans had a 31-3-2 record in his three seasons at USC, including three Rose Bowl Game appearances and two National Championships. Across his three visits to The Granddaddy of Them All, Davis tallied 342 all-purpose yards and three scores, helping the Trojans to victories in the 1973 and 1975 games. The USC legend was inducted into the USC Athletics Hall of Fame in 1999 and the College Football Hall of Fame in 2005. Davis was drafted in the NFL and MLB Drafts but chose football and played in the World Football League, Canadian Football League and NFL for six seasons between 1975 and 1983.

Jim Delany served as the Commissioner of the Big Ten Conference from 1989 to 2020, retiring as one of the most influential figures in college athletics. Delany had numerous accomplishments as Big Ten Commissioner, including the creation of the Big Ten Network, the development and implementation of the first college football replay system and the negotiation of broadcast rights for college football and basketball. He was a leader and advocate for gender equity in college sports and initiated the Big Ten Gender Equity Action Plan in 1992, which aimed for 40 percent of all athletes in the conference to be female within five years. Delany was instrumental in the creation of the Bowl Championship Series and the College Football Playoff but worked diligently to maintain the tradition and history of the Rose Bowl Game.

Ron Simpkins led the Michigan defense to three straight editions of The Granddaddy of Them All from 1977 to 1979. The Wolverines came up just short in all three games despite stellar performances from Simpkins. The linebacker tallied a then-Rose Bowl Game record 16 tackles in the loss to Washington in 1978, including 13 solo stops. He followed up that performance with 12 tackles in the 1979 Rose Bowl Game against USC. The 1979 consensus All-American was selected by the Cincinnati Bengals in the 1981 NFL Draft. He played seven seasons in the NFL and later worked at Wayne State University, where he oversaw the implementation of grant-based initiatives centered around encouraging Detroit youth to participate in sports to aid in the development of leadership skills.