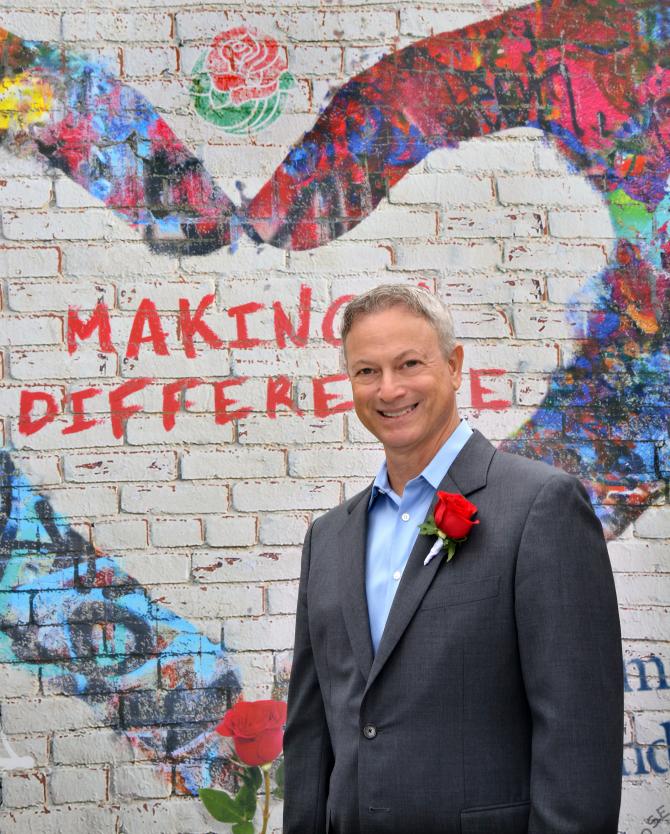 Pasadena, CA. (October 30, 2017) – Actor and humanitarian Gary Sinise, who is most famously known for his portrayal of Lt. Dan Taylor in the landmark film Forrest Gump, was announced today as the 2018 Tournament of Roses Grand Marshal. Sinise will ride in the 129th Rose Parade® presented by Honda, themed “Making A Difference” and participate in the pre-game celebration of the College Football Playoff Semifinal at the Rose Bowl Game presented by Northwestern Mutual both are held on January 1, 2018.

Tournament of Roses President, Lance Tibbet, made the announcement at Tournament House in Pasadena. In his remarks, Tibbet referred to Sinise as someone making a difference in his community through his work with veterans.

“The 2018 theme, ‘Making A Difference,’ is a way to honor and celebrate all of the people in our communities, who quietly and without desire for reward or recognition, act in selfless, generous and kind ways to aid or benefit others. Gary Sinise is absolutely one of those people. Gary’s humanitarian work with our defenders, veterans, first responders and their families over the years, embodies our theme to the fullest.” shared Tibbet. “As members of a community, a country and a planet, we all have the ability, power and responsibility to help one another and as Gary likes to say….we can always do a little more.”

Gary Sinise has been working in support of veterans for nearly forty years. His commitment started in the early 1980’s when he began supporting local Vietnam veterans’ groups in the Chicago area and co-founded the Vets Night program at the Steppenwolf Theatre. This program continues to this day and invites veterans to a free dinner and performance for each one of the plays produced at the theatre.

Among his numerous film and television roles, it was his portrayal of Lt. Dan Taylor, which formed an enduring connection with servicemen and women throughout the military community.  Shortly after the film opened, Sinise was introduced to the Disabled American Veterans organization as they invited him to their national convention to present him with their National Commanders Award for playing the double amputee. Sinise’s involvement with veterans has included volunteer work for the USO, performances with his band, the Gary Sinise & Lt. Dan Band entertaining troops around the world, and the creation of the Gary Sinise Foundation which was formed in 2011 with the mission to honor America’s defenders, veterans, first responders, their families and those in need.

In recognition of his humanitarian work on behalf of veterans, Sinise has earned numerous distinguished awards including the Bob Hope Award for Excellence in Entertainment from the Medal of Honor Society, the Spirit of the USO Award, the Sylvanus Thayer Award from the West Point Association of Graduates, the George Catlett Marshall Medal from the Association of the United States Army (AUSA),and the Presidential Citizens Medal which is the second-highest civilian honor awarded to citizens for exemplary deeds performed in service of the nation, among others.

Gary Sinise Foundation was formed in 2011 with the mission to honor America’s defenders, veterans, first responders, their families and those in need. Through its R.I.S.E. (Restoring Independence Supporting Empowerment) program, specially adapted smart homes are being constructed for severely wounded veterans nationwide. Each one-of-a-kind home is customized to ease the everyday burdens of a wounded hero, their family and caregivers. Other programs include Relief & Resiliency Outreach, Invincible Spirit Festivals, the Lt. Dan Band, Arts & Entertainment Outreach, Serving Heroes, and First Responders Outreach. Its latest program, Soaring Valor, is sending WWII veterans to The National WWII Museum and documenting their first-hand accounts of the war. For more information, please visit GarySiniseFoundation.org.