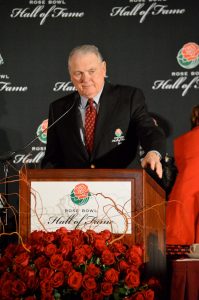 The Rose Bowl Game Keith Jackson Postgraduate Scholarship is an annual scholarship that recognizes one senior student from the Big Ten Conference and one senior student from the Pac-12 Conference for exceptional achievement in academics and civic service, who also wish to pursue a career in the sports industry, with an emphasis on journalism, media relations, event operations, team operations, or marketing. The scholarship is merit-based and features a one-time, non-renewable $10,000 financial award for each recipient. Each scholarship will be funded directly to the recipient’s postgraduate institution upon verification of enrollment within eighteen months of graduation.

The scholarship is now closed for applications and the 2021 winners will be announced soon.

As part of the Keith Jackson Postgraduate Scholarship, the recipients will be given the unique opportunity to receive a “Rose Bowl Game Experience” tailored to each recipients’ interest of study. The Rose Bowl Game experience will consist of a four-night trip to Pasadena, Calif., to shadow personnel at the “The Granddaddy of Them All.” The experience culminates with the opportunity to work the Rose Bowl Game on January 1. Transportation, lodging, and meals during each experiential visit will be covered as part of the scholarship award.

The scholarship is open to students who graduated in the past year or who are in their final year of course study (with an intended graduation date of in the Spring or Fall/Winter). The student has consistently demonstrated high levels of achievement in academics and civic service throughout their collegiate career. An independent committee will select one recipient from both the Big Ten and Pac-12 Conference to receive the scholarship.

The scholarship is named on behalf of Keith Jackson, who was the voice of college football for several generations. Jackson was a man of many catchphrases, including “Whoa, Nellie” and “Big Uglies”, but was also credited with popularizing the Rose Bowl Game’s nickname as “The Granddaddy of Them All”. He was on the call for the Rose Bowl Game on 15 occasions, more than any other broadcaster, between 1989 and 2006. His final game in the broadcast booth was the 2006 BCS National Championship at the Rose Bowl Game.

The Keith Jackson Postgraduate Scholarship is funded by the Rose Bowl Game, which is a tri-party agreement between the Pasadena Tournament of Roses, the Big Ten Conference and the Pac-12 Conference.

Eligibility Requirements
Students from universities that are a part of the Big Ten and Pac-12 Conference are eligible for the scholarship. These students must be in their final year of course study, or have graduated in 2020, and have consistently demonstrated exceptional achievement in academics and civic service throughout their collegiate career. Specifically, a nominee must:

Nominations must be submitted directly to the Tournament of Roses by the applicant. A complete nomination packet should be emailed to the Selection Committee no later than July 31. A nomination packet must include: