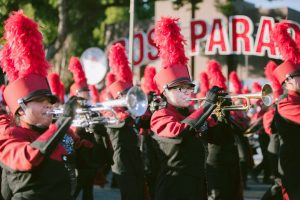 PASADENA, Calif. (March 4, 2020) – The Pasadena Tournament of Roses® has selected 21 of the marching bands that will participate in the 132nd Rose Parade presented by Honda, themed “Dream. Believe. Achieve.” The announcement of the 2021 Marching Bands comes as we celebrate National Marching Band Day.

The bands will travel to Pasadena from across the United States and around the world, including Italy, Japan, Panama, Sweden and Taiwan.

Thousands of performers will enjoy the experience of a lifetime when they march down Colorado Blvd. on January 1, 2021, each with their own unique story.

The bands selected are listed below, alphabetically.

Two bands will be added to the line-up when the universities participating in the College Football Semifinal at the 107th Rose Bowl Game® are determined in December.

Bands who would like to participate in the 2022 Rose Parade are encouraged to apply through an online application, available now on the Tournament of Roses website; https://tournamentofroses.com/events/apply/